Making use of down-time 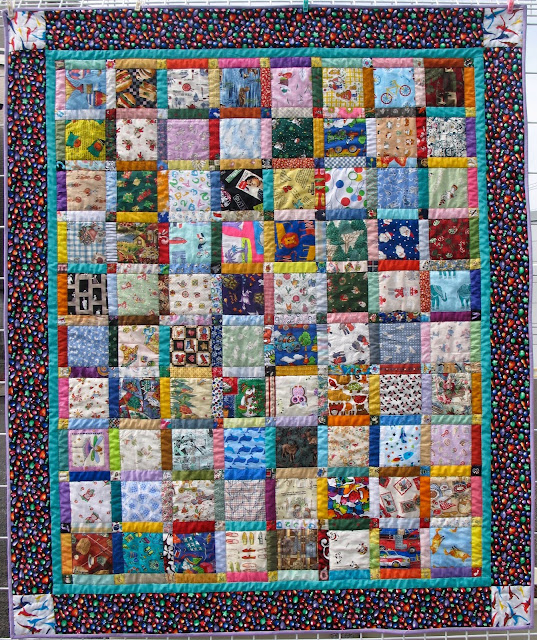 A friend is starting up an NPO for teaching English to orphans, with the expectation that when they age out of the facility, that English ability might give them a leg up getting jobs.

In February, she asked me to make a banner for her to use in promoting her venture. I have no picture of that ... just a colorful strip of fabric with the letters JOEE and an embroidered kangaroo.
After that, I began to think an I-Spy quilt might add a bit of fun to the learning, so dug out my tin of 4-inch kid-friendly prints. I had 80 already marked and cut ... perfect for a quilt. 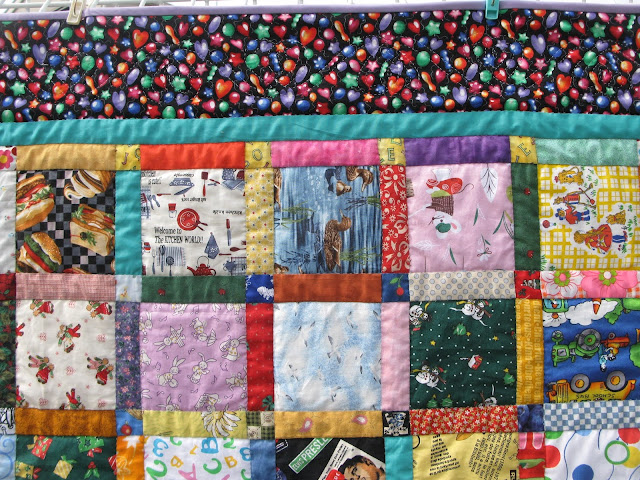 I added alphabet cornerstones along the border sashings and JOEE along the top border.
As I was putting this together, all kinds of ideas kept coming to mind of games to play other than I-Spy. I made two small beanbags thinking of maybe tossing them onto the quilt and making a sentence using the picture. If the bag lands on a letter, maybe coming up with a noun, verb, and adverb or adjective in a short sentence with that letter. 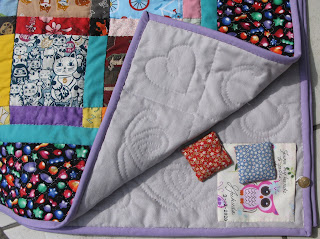 I used some of my 2x2" scraps for the beanbags and put a pocket on the back corner to hold them.

I was told by the Children's Ministry director at church that this friend will be coming next week to give the children's message and promote her NPO with church members.

I think that will be a perfect time to pass this to her.
Oh, by the way, can you see the button on the pocket? It is a leftover from the 1964 Tokyo Olympics.


So many activities have been cancelled. School is off. The quilt group is not meeting. The Tokyo American Club has cancelled our Scout meetings. Choir practice is now done from home by computer. Luckily church goes on, though many weekly meetings are off.
I was somewhat glad for the extra time to put the quilt together. Since it will be carried from place to place, I used a light thinsulate #40 for batting. I will have a week longer to think about a carrying bag. 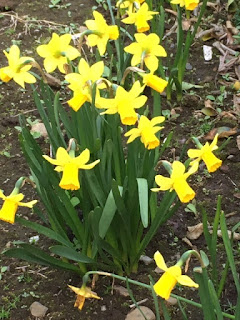 I had to make several trips into town during the week.

My watch died and I needed to take it to have the battery replaced.

Then, I had to go to the small sewing shop to get enough bias tape for the border of the quilt.

Along the way were signs of spring. These little daffodils are in a neighbor's bed which the rest of the year is full of weeds.
I have one of these in a pot that is blooming too.


The local day-care children and adults are enjoying the sun in the parks nearby. 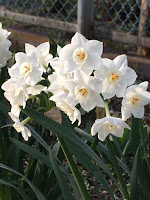 White jonquils were blooming along the fence of the local school ...

Now closed until April when the new school year begins. 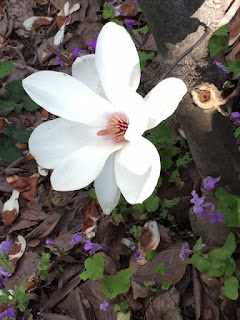 Some early magnolias have begun to bloom.


This one near the base of the tree seems to be communicating with the violets.

The big purple magnolias along the road to the station have just begun to open but because of winter pruning, there are few buds left to open.

The flagpole at the empty school had a Japanese flag flying at half-staff in memory of the 3/11 earthquake and tsunami.
There were a few older children kicking balls and running around in one of the parks along the way.

The most striking display is along the fence of a neighbor's yard. 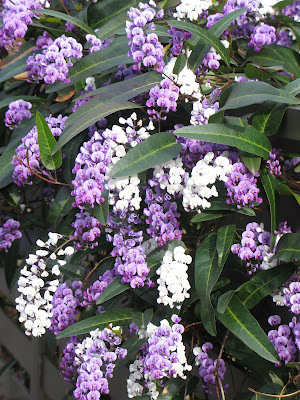 This Orchid Vine is just stunning.
Actually, there are two vines, one purple and one white, but they are twisted together making it seem the flowers are varied.


I had been watching a huge cymbidium orchid outside the school entry getting ready to bloom.

Every year it has large flower spikes that bloom a very long time. It is one plant that seems to thrive on neglect.
With school closed, I am missing  being greeted by those flowers.

I wish I could say my house is cleaner now that I have had time on my hands. Tidying up doesn't seem to have the same voice as the call to quilt.

Hope all are staying well....
and you can get a wee taste of seasonal flowers.