Since my last post, the houses have been sitting in a tin, waiting for the silkworms to finish their feeding and free up the coffee table to test some layout designs. With little travel time into town and back, I have no take-along work prepared. 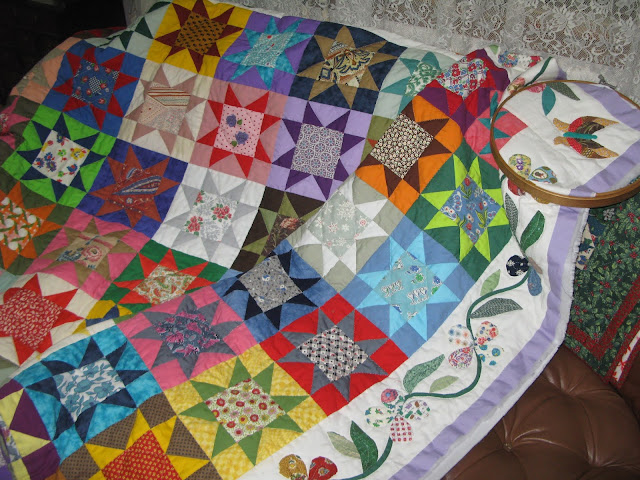 Most of my down time has been spent quilting the feedsacks in-the-ditch. I did add simple quilting in the center of each block.
Today I finished quilting around the applique on the first border.  There is a lot of empty space left over and I am thinking of what I could add in those spaces. Maybe I will finish all of this quilting and that will give me some time to come up with a plan. 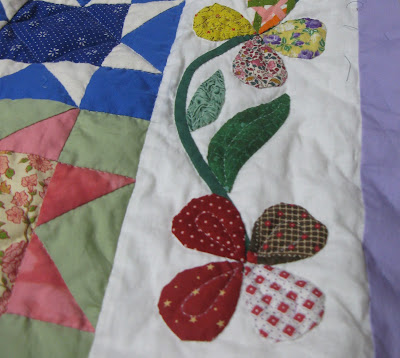 I added a bit of quilting in each petal of the flowers, and put a vein in each leaf.

I tried to work without using a hoop and ended up un-quilting a section, as it was too wonky. My oval hoop is just too large and the borders are only lightly basted.

I ended up getting out a small hoop about 12 inches across and that seems to help.

I have been thinking of adding yoyos to the center of the flowers.

Those are a throw-back to my childhood when sometimes whole bed covers were made of yoyos.
(often of feedsacks too).

I saw a really nice embroidery stitch on Queenie's blog last week that also looks like it might work. It would probably be faster, but I am wondering how it might work on the back side of the quilt.
Well, I imagine it will be a while before I get all the borders this far and so there is time to think about that solution as well. 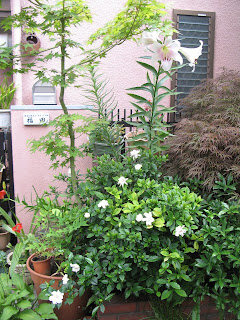 This is the season for the garden to show off,

The gardenias smell so strong, I could find my front gate blindfolded. Usually there is a problem with caterpillars chewing leaves and buds but this year all were left to bloom.

The lilies are also standing up and out. I had to tie them up as they were reaching to the west for more sun. They are all so very tall. 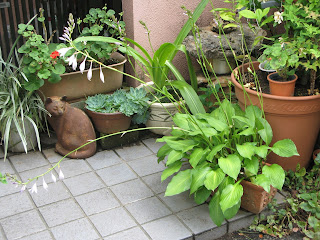 I had to turn the hosta planter sideways because those were also reaching out into the street to the west.

I have never had them bloom with so many stalks or this early in the year.
These were rescued from my neighbor's garden as the bulldozers were tearing it up. That was a number of years ago, but now they seem happy and used to being in a planter.

I have a few others of a different style on the north side of the house that have yet to bloom.

Days go by with lots of virtual activities. Zooming and skyping and facetiming and gotomeetings and livestreaming. My outings are sweeping the street to the corner and back ... sometimes twice a day ... and pulling weeds in the park at least once a week ... and of course hunting and gathering mulberry leaves for the caterpillar gang.
Twice I have made recordings to join our virtual choir. I have to admit I prefer singing with the group rather to my cell phone.
I have to let friends and family members know when I am going out so they won't panic when I don't answer a phone call or zoom in at the start of a community meeting
Our church will start up with a limited number of people allowed to join in person from tomorrow, but I think choir will be one of the last things to be added. I am still delivering onigiri to the homeless on Monday mornings, but as the weather gets hotter, that will temporarily end so as not to have the food go bad in the heat waiting in the cupboard for delivery.

The groups of young people that had lessened with closing of bars and karaoke places, have started to reappear in the morning hours. Most people are still wearing masks when out in public. I do not like trying to walk with my glasses fogged up. Can't see with them, can't see without them... and my ears are so wimpy it is hard to keep the masks on. I should probably come up with something that ties around the back because it looks as though masks will be part of the culture for a while yet.

So, that's about it from my neck of the woods.  I enjoy scrolling through my blog list to see how everyone else is filling their down time.
Posted by Julie Fukuda at 1:22 AM 9 comments: