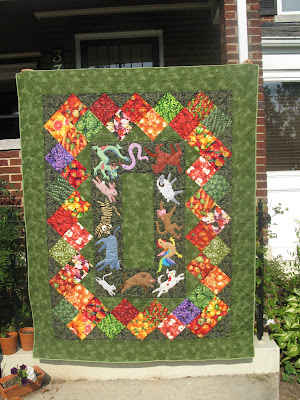 Having drawn Jon's name for birthday giftee, I thought it might be fun to make him a quilted birthday tablecloth. I asked him for table size and color options and then sat down with a pencil and paper to draw up the plan. The idea was to have animals of the zodiac running around to represent the years as they fly by and having made several cloths of food prints and having them found good for hiding spills, I thought it might be fun to have food on the table. I guess the title might be "Food on the Table".

Starting with the center I got bogged down finding positions and fabrics for all the animals. In the end, it took me almost a month past Jon's birthday to complete. With twelve inches between the center and table edge, I was able to put the food fabric on point for a more interesting effect. All the quilting templates I had on hand were the wrong size so I ended up re-drafting them. It gave me work for the trip in the summer and I was able to put in the last stitches before leaving to the jamboree. It has already been spilled on but is yet to celebrate a birthday, having missed Jon's.