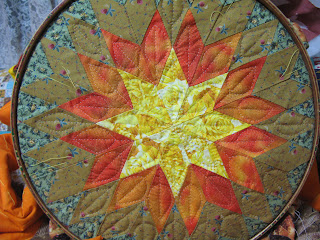 Tomorrow my quilt group meets here. Time to make a dessert and de-dog-hair the house.
At least I have a project to work on. The quilted leaves in each diamond are rather labor intensive but I like the result.
Posted by Julie Fukuda at 2:40 AM 8 comments:

Only six hours crawling around on the floor but I am so happy I had a space just big enough. I use thinsulate from a roll so it had to be pieced. I have heard that 3m makes thinsulate bats and that would be nice but they are not sold here as far as I have seen.
This was a good activity for a gray rainy day. Nothing but the drip drip of the rain and the snip of the scissors and the click of the threader. I began to think about a large quilt my daughter had brought to a family reunion, spread on the cabin floor, and all the cousins, aunts, sisters gathered around to make short work of the project. How I could have used the hands and company. I did remember that at that time someone had brought some spoons to help catch the needle. The more I thought about it and felt my own fingers getting a bit sore, I had to stop my work and go to the kitchen for a small shallow spoon. Could have used it sooner.
I had worried about the lone star lying flat but that was not a problem. The bear paws, however, seemed to be asking for more than their fair share of space and then I spotted several of those pesky bears were out of place! I am not going to un-sew them so they will just have to stay where they are.
I doubt this quilt is any longer a thing to take with me to quilt meetings. It is way too big and bulky now that it is together. Time has come to get two other date-related projects going. The quilting will happen on cold winter days at home. As a result of blog-hopping, I saw a lone star quilted by machine with leaf shapes in the diamonds. I am working by hand but I think I will try to get that effect. Thanks for the ideas out there. Keep 'em comming!
Posted by Julie Fukuda at 12:37 AM No comments:

Email ThisBlogThis!Share to TwitterShare to FacebookShare to Pinterest
Labels: basting

The back has gotten its act together. 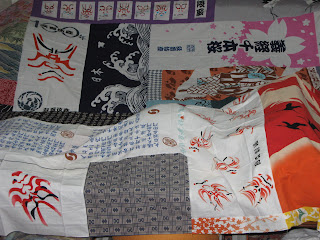 Well, today the backing of the quilt is finally done. In the end I had to let the towels decide where they should go. Because of the variety of makers, there is more often than not a variety in both width and length of each towel. Also, because of the way they are dyed, like batik, there is no difference in front or reverse side EXCEPT where there is writing ... and many of the towels are made for commemorative purposes so writing is part of the design. Not knowing which side is up could make for a backward bit of reading.
Next challenge will be piecing the batting. I'm hoping I will have enough to do the job. Anyway, it will have to wait a bit because all of my day tomorrow is taken up with choir, church, Scouts, and family.
Posted by Julie Fukuda at 5:14 AM No comments: 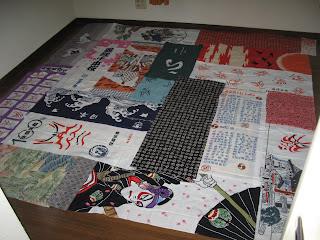 A search of my storage box reveals that I have more than enough towels to back the quilt.
There are lots of Kabuki related ones and a few Scout related ones and even a list of the names of the 47 ronin ... how samurai can you get?
Second discovery is that if I remove all the furniture and the ladder to the loft, I can make enough space to lay the quilt out for basting. That was a pressing worry.
I would like to arrange the towels so there is no up or down...left or right. There is some variety of width and length depending on the maker which makes it a little tricky too. Too bad all my daughters live so far away as they are good at making those decisions for me.
Posted by Julie Fukuda at 7:53 PM 2 comments: 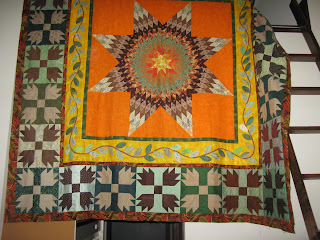 Vines and leaves have been added and the top is finished! I have been giving the backing some thought. My friend gives English commentary for Kabuki ear-phone-guide. Her husband comes from a samurai family. I have decided to use traditional tenugui and piece them together .
I have collected some Kabuki ones and some of the traditional family crests. I know I have a few of the designs that suggest long life and happiness.
Today was not the day to hunt through my collection as I was awakened in the wee hours with a call to teach, going in for a teacher who was out for the day. What fun to spend a whole day with kids and although the weather in Tokyo is still quite hot there was a nice breeze blowing through the downtown area. Tomorrow is a holiday ... autumnal equinox ... and a good day to begin the challenge of reverse-side planning.
Posted by Julie Fukuda at 1:34 AM 3 comments:

My quilt group = my inspiration 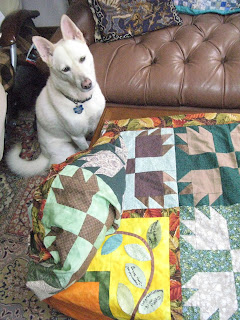 The Tokyo International Quilters is really the collected remnants of assorted quilt groups. When you live in a place like Tokyo, you say good-bye, it seems, more than you say hello and we have said plenty of good-byes. Still a small core of avid quilters remains and we meet every-other-Friday at one of the member's homes and enjoy quilting, fellowship, obento, and dessert.
Yesterday I arrived a bit late and found, to my extreme joy, a very special visitor ...a kindred spirit, really... I had not seen in months. It was all I could do to tear myself away at the end of the afternoon.
I will need to buy more green thread to finish sewing the leaves but I spent the time sewing a two-inch border outside the bear paw blocks. I think this not only brings a bit of the orange and yellow to the edge but helps to control those bears who were flexing their seems and behaving like twelve and a half wannabes.
Posted by Julie Fukuda at 7:53 PM 2 comments: 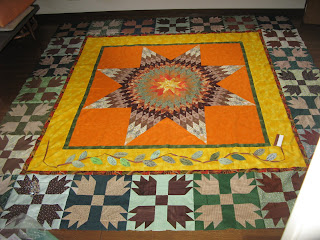 Friday is my quilt group meeting. I need something to work on and just the project to meet that need. Over a year ago I was in the wedding party of a very dear friend, a fellow Scouter. She was marrying another fellow Scouter and both were members of a Woodbadge Bear patrol.

I decided a Bear Paw quilt would be the perfect gift but nothing this big is made by hand in such a short time. I drew up a plan on graph paper and marked out leaf shapes on assorted green scraps. Those I took to the wedding and asked guests to sign them with names and wishes.

After finding out my friend and especially her new husband liked earth tones, I pulled out my collection of greens and browns and cut out the pieces for 24 12in. bear paw blocks... light on dark and dark on light. Imagine having a stash that big! It hardly made a dent.

After the border blocks were finished I drew up a template for the lone star. All the patterns I had in books were for machine piecing so this was a bit taxing to my non-math brain. Now star and inner borders are done and today I finished sewing the blocks around the outer edge. Now it is time to applique the vine and leaves. (I probably should have done this before assembly but I wanted more control over the final placement) Meanwhile, I have enough of the leaf print fabric to add a small border to the outer edge. I am already wondering where I will ever find floor space big enough to lay this out for basting.
Posted by Julie Fukuda at 10:44 PM 4 comments: 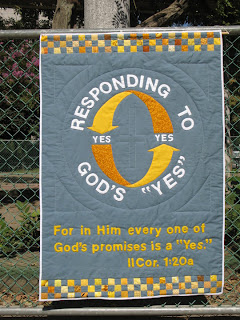 August 26th Paul asked if I could make something to hang in the church entry where a large paper heart had been the year before. He wanted it done by that Saturday, the 29th or by the latest the 30th.
I told him no way could I get anything decent done in that length of time so he said I might take until the 5th as long as it was hanging by Rally Day. Thus I agreed to give it a shot and began on the 27th.

I was stuck with the logo that had been decided by the committee and their choice of colors but hanging a white banner in the entry for a whole year didn't seem practical so I reversed the colors putting white and yellow on blue rather than yellow and blue on white. Since time was short for applique letters, I went out to the local button store and bought yellow and white felt. Ignoring the demands to match the "font" I used stencils to mark the letters. I was pretty well stuck with what I had on hand.

To give the banner better proportions, I added an upper and lower border pieced of assorted yellow fabrics and the background blue. "Yes" and yellow beginning with "Y"...to me they represent the variety of ways one answers "yes".

I lined the hanging with fabric left over from Jon's tablecloth. I had planned to turn it to the front along the edge but instead added a narrow purchased binding.
Sleeve added to the top and bottom and hanging was finished on September 1. Delivered to the church September 2. Size is about 28inches by 38 inches.
Posted by Julie Fukuda at 6:51 PM 3 comments: