Every fall, the tree trimmers  come to my door, wanting to prune the trees in my front border. Actually, I do not want all the buds cut off of of my lovely plum tree, so I explained to the most recent "gardner" the reason for not wanting his service at that time.

That was a good choice, because this past spring the plum tree was the most beautiful ever and early summer brought more plums than there have ever been.

I sometimes get complaints from people walking by, that the branches are rather low, and someone on a bike might touch them with his head. This is not a "through street" and there is a sign behind where I was standing to take this picture saying no cars. Yes, sometimes cars do try to squeeze past this wall and the fence on the other side. Often they end up knocking leaves off the tree as they pass. I often trim the lower branches so there will be no problems, but I have been concerned about the higher branches that are against the house and touching my neighbor's roofed area, so, when the guy showed up earlier in the week, I said OK, but told him I only wanted the lower branches above the street and those against the house and neighbor's roof taken off. 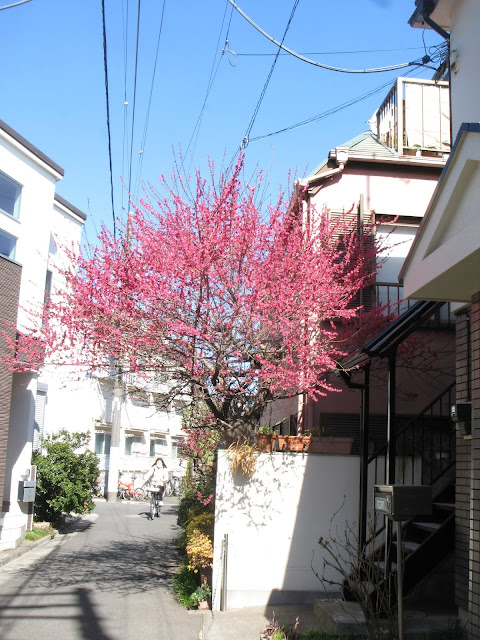 I should have stayed outside, but I was in the middle of an online meeting, and didn't get back out until much later. By that time, he was cutting back the biwa on the other side of the house. It was after he left that I went back out the front and saw the results of his work. 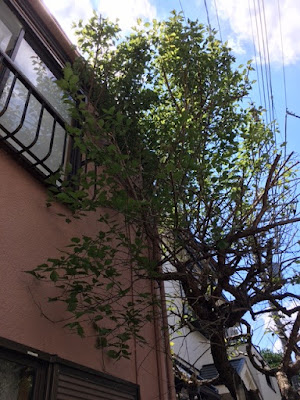 None of the branches touching the house had been trimmed and there is no longer shade over the street. 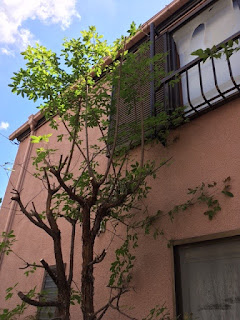 The maple as well Is more butchered than trimmed. The branches that were ripping the second floor window screen are still there. I'm pretty sure there will be branches returning, but removing those against the house will require setting up a ladder just to reach the lower ones. there were a lot of clippings left among the plants under the trees and a few caught among the higher branches where I will need a ladder to reach,

The shade along the street is gone and more sun comes into the house at the heat of the day. I guess I have learned my lesson the hard way. For what I paid, I could have gone out and bought one of those long-arm shears at the end of a pole. 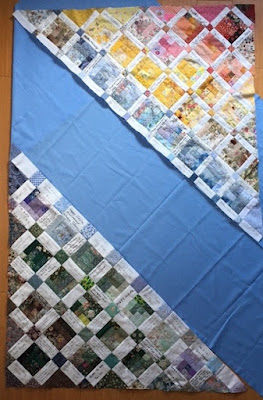 This will be the next choice. I hope it will not be as bad. I have finished piecing the upper and lower parts of the banner, Before I insert the blue area, I am thinking it might be easier to add the flowers and vines and words first. Probably I need to prepare a large piece of paper with drawings of the things I need to add ... or maybe I could cut the blue to fit and then overlay it with drawings.

I still need to come up with ideas for the border. I am thinking of including strips for those who want to sign their names. Hopefully I don't melt from the heat before this is done...

Now that I have a bit of floor space, I decided to lay out the anniversary quilt.
On our church's 140th anniversary, I took these white strips and a sign pen to collect signatures.
I don't remember why I made some 1x4 and some 2x4.
My original thought was assembling some kind of a white trellis  with vines and flowers behind.
I was thinking of a theme... "150 Years and Still Growing"
Next year will be that anniversary, so it is about time I get this thing underway. 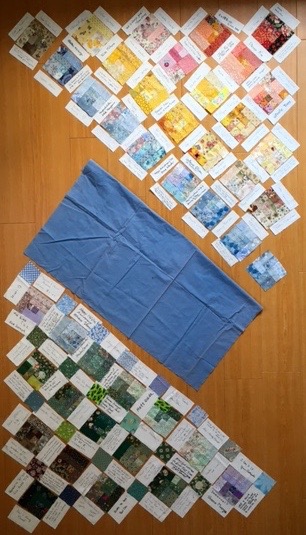 After making a number of random floral blocks, I noticed a similar idea on another blog with more coordinated colors in the pieced blocks.  I thought that might be a bit better and now I seem to have enough of those and I am glad I made the change. No doubt I will find another purpose for the other pieced ones.

Most of the smaller strips are  just signed, but the larger ones have a message as well.   I decided that, on  a banner, it would be easier to read those wide ones if they were closer to the bottom border. This is the layout I came up with. the center strip will be some shade of plain blue with flowers and vines and words added.

Next task will be cutting a few more half-square triangles and going through my floral one-inch squares for the upper half layout.    I need to cut a few more inch-wide strips to balance the upper half, and I am thinking adding strips to the border for more to sign on the anniversary celebration day.

For now, I am looking forward to the day I can begin sewing these rows together,     I have yet to sort through my solids, hoping to find a large enough strip of light blue for the center.  Time to get back to work!