The Tokyo Quilt Festival is having its last day today, having begun last Thursday, January 24th. Even attending two days, it was difficult to get many pictures with so many people filling the aisles between. 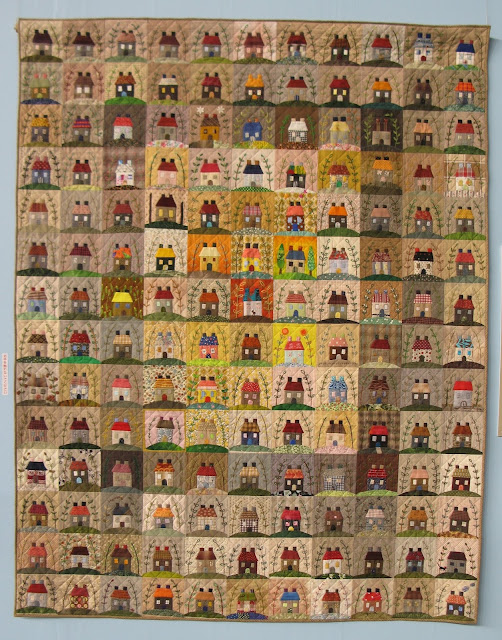 The theme for partnership quilts this year was "Houses", and as happens each year at the start when the theme is announced, the teacher who is taking on the assembly that year, will be shown on NHK TV talking about the subject and offering a number of suggested patterns.

There may be classes as well.


Other than the variety of fabrics used ,
there is little variety in the blocks shown on this quilt. 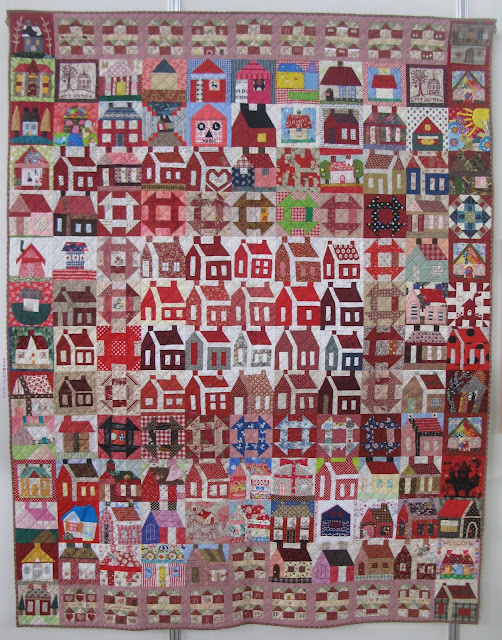 This composition seems to have picked out red houses. One seems to have used the idea shown in the first picture and there are a number of traditional "Little Red School-house" houses in the center.
The upper and lower row of blocks may have been made in a workshop where the teacher supplied both the pattern and the fabric, as they look almost identical. 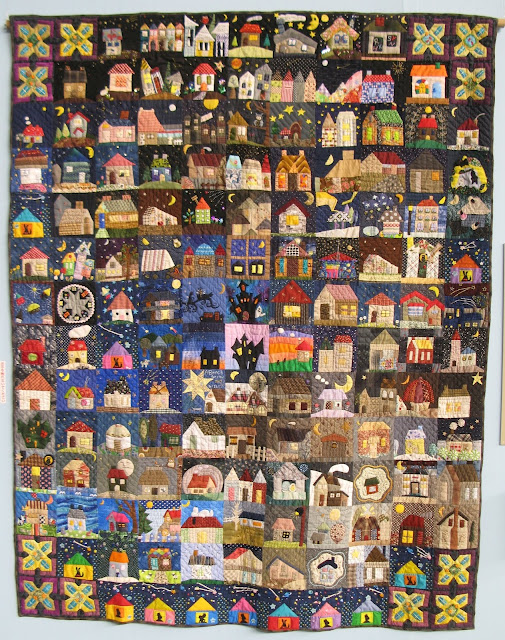 This assembly seems to have been organized by houses at night. There is also a block shown in the first quilt, only with a dark background. In general, this quilt seems to have more variety of houses. 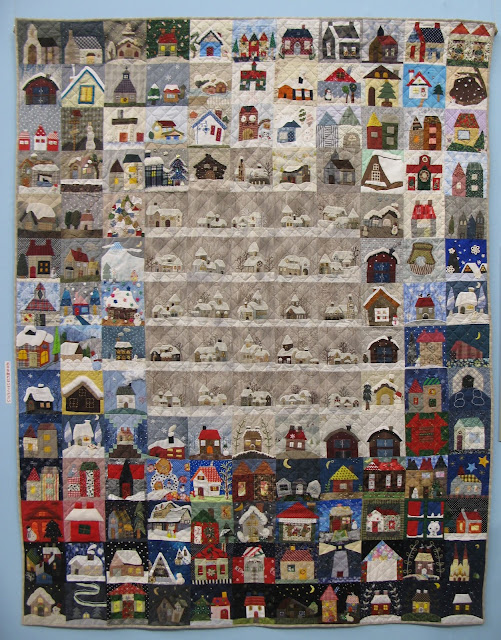 This quilt has a few more night time blocks and a more wintery look. The blocks in the center area seem to have been made by a group using the same fabrics. 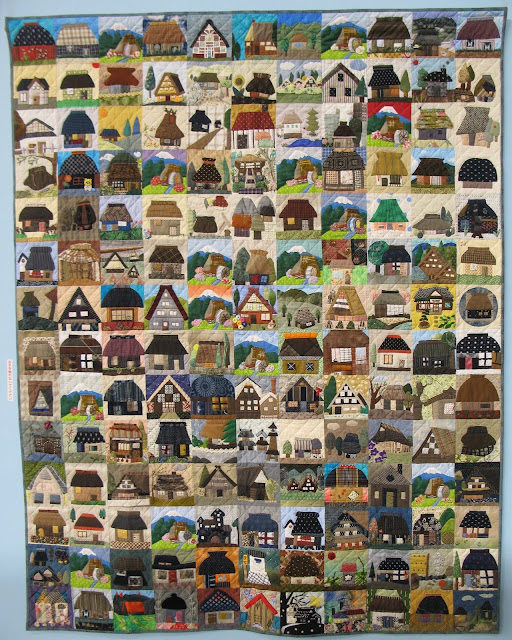 And many of these houses appear to represent country style thatched-roof houses ... kind of a more Japanese touch to the subject. I am thinking the majority of these participants came up with their own patterns. 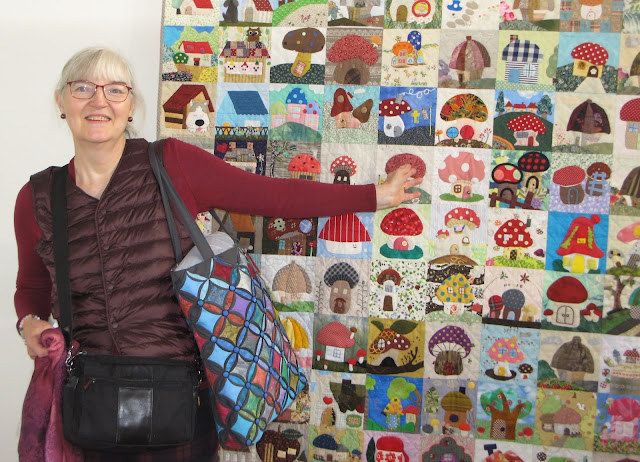 I attended the show on Saturday with my friends and here is "Queenie" (Carin) with her contribution containing a Swedish flag. Many of the houses on this quilt were mushrooms. 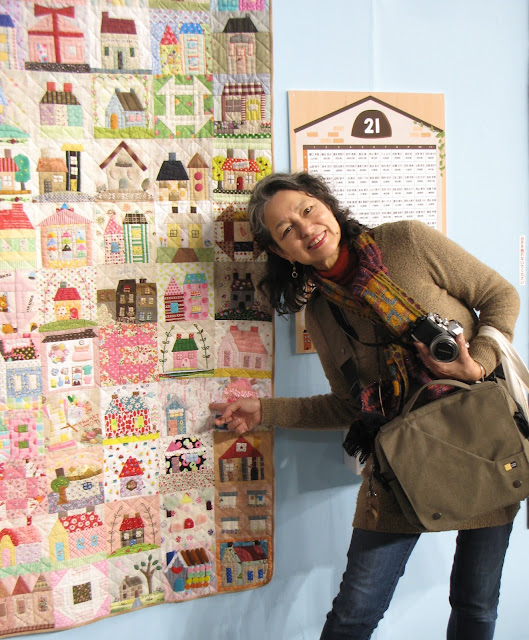 And, here is Tanya with her block among a pastel village. 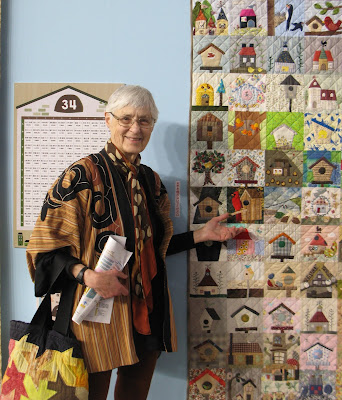 For the past few years, after learning that Carin always added her country flag, I decided to add the Ohio State bird, a cardinal,  to my blocks.


He has appeared in earlier years with a songbook, a nest in a tree, and planting a seed in a garden.

Here he is checking out a birdhouse...
though I don't think cardinals are likely to nest in a house.

This quilt did have a large selection of birds and birdhouses.


There were 66 partnership quilts exhibited. From last year, the required block size became smaller but the number of quilts does not seem to have decreased.

The show was quite crowded and taking pictures without elbows, shoulders, and heads in front was rather a challenge. Though the mob tended to thin out around 4:pm, the body was wearing out as well.

This was the 18th year of the show. Each year I fill out a questionaire before leaving, recommending they put the quilter's name in English. Many viewers were taking pictures and I have seen a few on Facebook with no recognition given to the quilters who must have spent the better part of a year producing a one-of-a-kind quilt.
Other than the teachers' category, only foreign entries had names other than in Japanese. One year I even brought home the questionaire to get help writing it in Japanese, thinking maybe they could not read requests in English. I am now thinking those forms are not even read other than to be used to send out advertisements to those who respond.

Please check out Tanya's and Queenie's blogs for good pictures and better information. I hope to show more later.
Posted by Julie Fukuda at 12:46 AM 13 comments:

Last year the Women's Conference theme was the seasons of our lives. I put together this tree surrounded by strips of fabric representing fall, winter, spring, and summer, thinking it might be fun to have members add leaves. As can be seen, it was not a popular free-time activity.

Though it was suggested I bring it back this year and make another try, I decided to re-purpose the tree and make an I-Spy quilt for my new granddaughter. Daughter of two naturalists (and one an avid birder) I have selected kid-friendly prints that are nature related. Well, there are lots of animals. 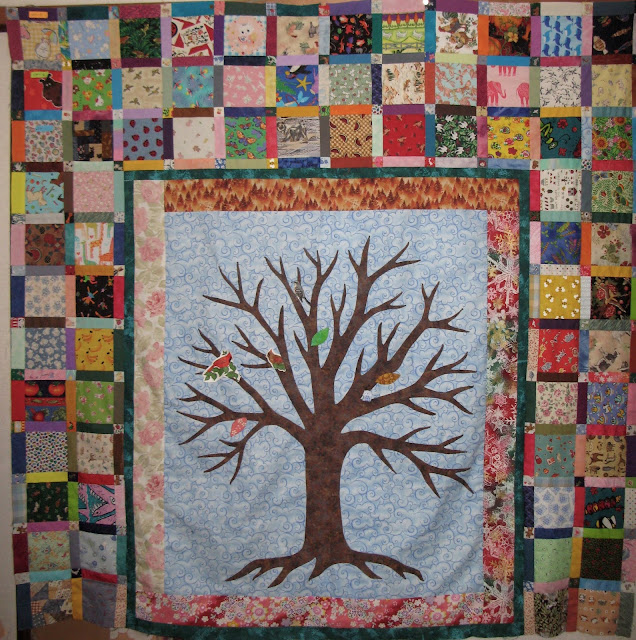 I am now working on the last three rows of blocks. Then I will add birds to the tree and maybe a few animals or flying critters? Maybe a variety of leaves? Then a bit of borders to tie it all together.
The prints are all 4"x4" with 1" sashing and small 1' cornerstones.

Phoebe's big brother is a good talker and I think he can play I-Spy to teach his baby sister new words. 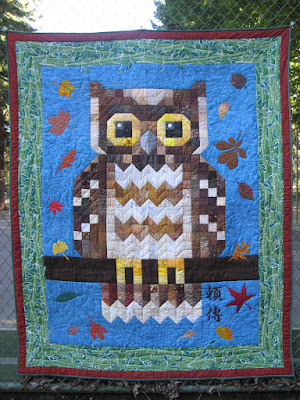 This was his baby quilt.

And I heard that his first word was "owl".

I still have work to do on the piecing, but the blocks are measured, cut, and arranged in baggies for take-along work so should go fairly quickly.

Appliquéing critters in the center will be a bit of a challenge. I have some good bird prints and am thinking of cutting them more simply and hanging them in the tree like ornaments instead of trying to sew around tiny feathers and beaks.

I have yet to search my stash for a border. I wonder if there is any left of that bamboo print on Ryden's quilt border. Also maybe a narrow sashing of the same dark green that borders the tree block.

I hope all my blogging friends are off to a fine new year.
Posted by Julie Fukuda at 7:37 PM 24 comments:

As I was putting the last stitches in the binding, my grandfather clock began ringing in the new year.
Now, I wonder, do I count this as the last quilt of 2018, or the first finish of 2019? 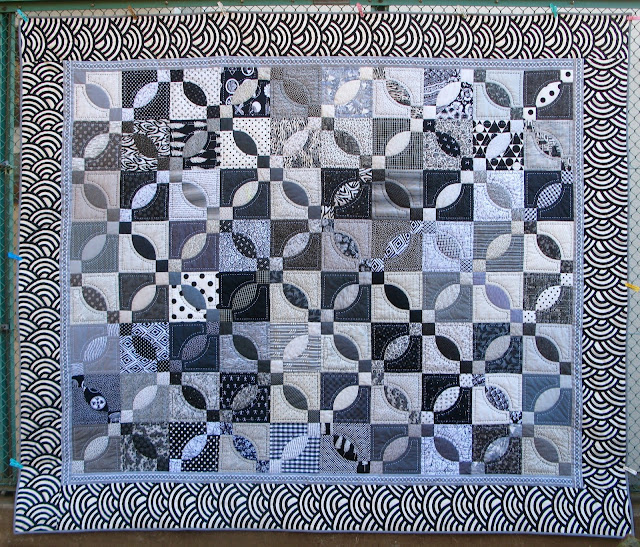 Today Nikko and I went for a long walk to find a fence tall enough for taking a picture. Even sideways, this still sticks out over the concrete base but I think it will have to do. Soon it will be flying out across the pond to Kaiea's waiting bed.

Kai's choice was black and white and I was rather amazed at the number of fabrics in my collection that were ready for use. The only one I had to buy was for the border, and since Kai's name means "rising wave", I just had to get this when I saw it ... though I wasn't really shopping at the time, but meeting a friend.

Next in the line will be my new granddaughter's baby quilt ... plus some long overdue promises that need to be filled.

Best wishes to my blogging friends for a happy and productive new year.
Posted by Julie Fukuda at 5:52 PM 9 comments: