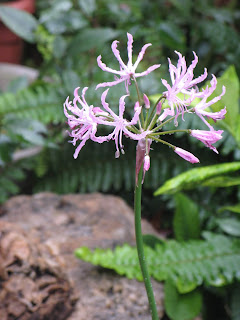 This has been a very strange fall. We went directly from hot humid sauna weather to early winter.

Other plants seem to be confused as well. The spider lilies around the neighborhood only sent up one or two flowers from beds that are usually full. The white ones came into bloom at the autumnal equinox but the red ones were about a week later.

Usually they pop up suddenly within days. A few weeks ago, what looks like a spider lily popped up in the pot beside my gate. The flowers are still opening one-by-one.
The strange thing is not only the timing, but the color is a light purple.

I have never seen one this color and I'm wondering if it is a volunteer hybrid. 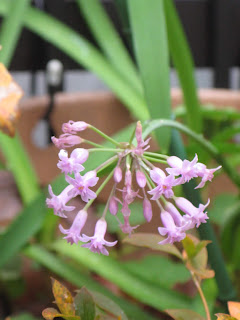 I have a number of agapanthus, and when I looked at that pot hanging on the fence, what should I see but a flower of the same color there. Definitely, they are not the same.

What is really strange is that the agapanthus blooms in early summer. Another confused plant... Maybe competing with the newest addition to the garden?

And, with most of the toad lilies finished, there, in the same front bed was one just beginning to open. A confusion of the purple flowers all at the same time.

Our usual winter is a season of bright blue skies. I remember one winter when my parents visited, every day in the month was sunny. These days we have revolving sun, clouds, and rain. The wind rattles the shutters and there are plenty of green leaves falling along the street (from my own plum tree) that I go out to sweep several times each day. If I don't get them swept as they fall, I will have to walk farther to pick them up all the way to the corner. 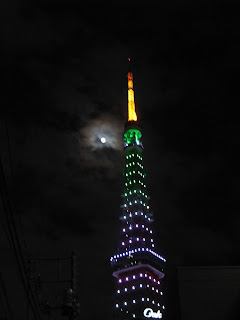 
Maybe for the holidays? I always pass tourists? taking selfies as I walk to and from the station.

The moon will be full on Christmas eve ... but will we see it? Rain is predicted .... though I think the weather app on my cell phone should get the pinocchio award, as it is wrong most of the time ... or does it not rain because I carry an umbrella on those days?
Well, sometimes I come out of the train station and before I step out into the pouring rain, I check the app once again. Well, it says "Partly cloudy" I must be under the cloud at that time and by the time I get home, the rain will be back in the cloud. 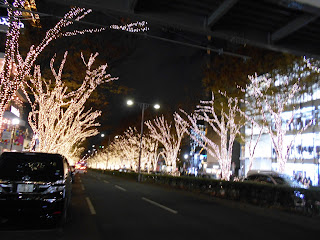 After watching the lights installed each Monday morning as I drive to church to pick up the onigiri for delivery, The street running between Aoyama and Harajuku station is now lit each night.

I noticed on Thursday that music was playing on speakers along the street and the lights were going off and on in a variety of patterns.

Years ago this custom ended... maybe to save money or protect the keyaki trees ... but I think these lights attract lots of shoppers and tourists to these high end shops. A few years ago, the custom returned. 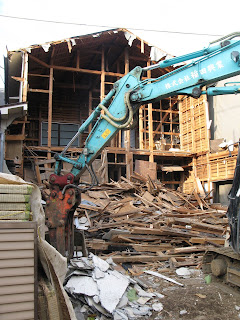 And, a bit of a sad change to my neighborhood is the number of lovely large old houses being torn down.

The crane is parked in what was a lovely rose garden last week. Those roses bloomed all year long, even in the winter. That is rather rare because Tokyo soil is really not very rose-friendly.

I have watched many of these houses and gardens lately completely wiped off so this seems to be the new normal.

One huge space was filled with six new homes (all only a foot or two apart). The most recent is all flat now waiting for the next step. Gone was a big beautiful Black pine that had been trained to make a bridge over the path to the entry.

My daughter snatched up a number of bulbs being bulldozed from the garden.

The place along my small street was replaced with an apartment building with 8 apartments that can't possibly be any larger than a 9x9 foot room with bath and toilet and maybe a small kitchen sink and hot-plate.

Tomorrow, home will be a bit more lively with the coming of the first of my holiday visitors. After promising myself to get things sorted and picked up, I am still struggling to make space for visitors to sit. At least the bedding has been set up and the lights are on the wee tree. I think I will let the granddaughters put on the decorations when they get here. I'm sure they have plans for things to do and time will fly with choir duty and homeless feeding tossed in as well.

AND .... In today's mail was a postcard stating that my Partnership block will be in quilt #14 at the Tokyo Dome quilt show. There is a discount ticket included in the card but it is more expensive than other years. Still, January will be starting and ending with lots to do.

Warmest Holiday wishes to all my blogging friends.
Posted by Julie Fukuda at 2:09 AM 11 comments: 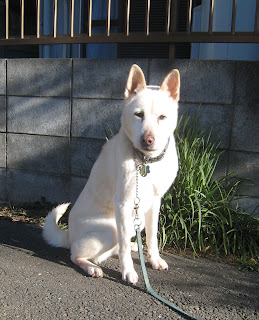 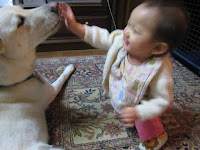 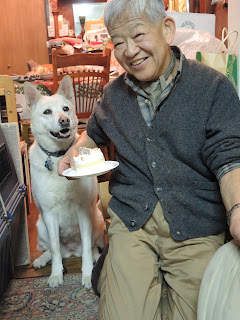 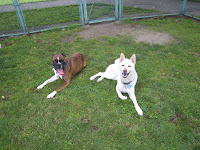 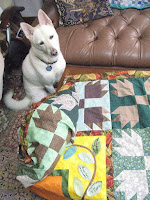 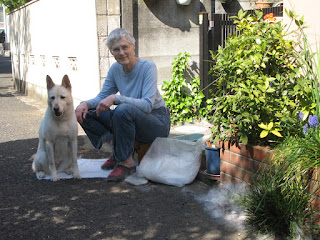 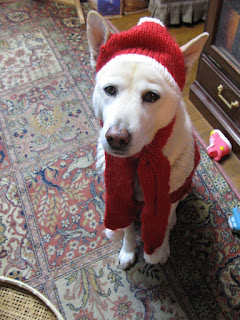 Several friends have also lost pets this week ... but my son has added a new kitten to his family. Hopefully, one of these days, another dog will find its way into heart and home....
Posted by Julie Fukuda at 4:01 AM 17 comments: