With the last days of school came the rush to load up the van with items needed for a week of scout camp. I was luckily able to bring the van closer to home so I didn't have to carry all my gear so far to the parking space.
I had been thinking of going early on Saturday, but Friday evening I had my Cub scout pack meeting and it was after 11:pm when I returned home. After checking the camp schedule, I figured I would have plenty of time to set up the craft area before my classes began so I took the morning to finish loading the car and went to my afternoon english class before loading up the bird and the dog and setting out.

Nikko is gradually becoming more and more overtaken by doggy dementia. After a week of blocking her from going upstairs where she was ruining the floor by constant wetting, I tried the entryway for a few days but that wasn't going to work either and I was wasting a big part of each day washing and waxing the floor and picking poop from between the floorboards with a toothpick.

I hauled the big crate into the entrance ... leaving about ten inches to pass through into the house. The crate helped a bit at night but I was getting up very early to take her out for her morning walk and she was still wetting her bed ... which I finally threw out.
When the day is without rain, I put her outside between the front door and the gate. In a way it was good to have her outside but she keeps walking in tight circles and steps in the water dish and knocks over the planters and all the tiles were wet and filthy. This afternoon I put her in the entry and scrubbed down the outside tiles.

I had to disassemble the crate and load that in the car to use at camp. In the past I have tied her up at the door of the craft area on a long lead but since she keeps walking in circles whenever she is awake, the leash would kink up and if it didn't choke her, it might get all wrapped up around her legs.
When the kids were coming and going from the room, I put her in the crate but during class time, I let her just circle the room until she lay down for a nap.

One day, some boys came in looking for the store (which was not open) at the corner of the craft room. They left the door open and I was busy working with the merit badge finishes and recording progress. During that time, Nikko wandered out and no one said a thing to let me know. It was later when the class ended when I discovered her gone. There were scouts all over but no one had seen her. Some leaders made the rounds of all the roads by car but she was not spotted anywhere. One would think a large white dog might be spotted but with many people looking, she was not seen. I was really afraid I had lost her without a chance to say good-bye.

Then, one of the leaders in a quiet golf cart , far outside of camp, heard the sound of her chain hitting the cement and got off to look through the thick bamboo. He found her at the bottom of a two-meter deep ditch, built long ago during the war to take water run-off from the hills down to the stream running into the Tama river.

The guy came back to camp to get me and took me down to where he had seen her. Yes, she was still there walking in tight circles at the bottom of the ditch. After fighting my way through the thick bamboo, I found a tree at the top of the concrete wall, grabbed on to the lower trunk, and hung on, dropping until I was straight down and then letting go to drop to the bottom. Luckily, the days before had been sunny even though rain had been predicted for the whole week and the ditch was relatively dry.
I put the lead on Nikko and tossed the end up to the guy who had brought me there. He pulled her up while I shoved her back end up until she could get all four feet at the top. Well, then I had to get myself out. The walls were too steep with no place to grab with hands or feet. I walked up along the bottom back toward the camp and after passing through a number of tunnels, found a tree that had fallen across the top of the trench. I was able to jump and grab the tree, then swung one leg over the tree ... perched rather riskily and thinking what to do next when another scouter came over and grabbed a tree with one hand and my right hand with the other. I could swing my left leg up so that I was sitting on the tree. Then a third scouter came and grabbed my other hand and I was rescued to solid ground. The whole event was so far from camp that no one would ever have heard that dog had she barked. How she got that far when she usually walks in circles, I will never know.
The last day of camp she escaped again and was found heading down the road in the same direction. Luckily I had seen she was gone and run after her, calling for two scouts to grab her collar.

Other than issues with Nikko, the camp went well and the only real rain fell as I was packing up my car at the end. I decided to leave without waiting for dinner and the campfire (which didn't happen in the rain) and was able to get some items un-loaded before taking my car to the parking lot. Of course the bird and the silkworms as well as the dog crate (which had to be cleaned and reassembled.) Saturday night Nikko slept there but I had to get up early to get her walked and fed before taking off to choir practice and the summer service, now an hour earlier than usual.

Camp had no access to computer or cell phone signals so I feel way behind when it comes to blogging ... even getting caught up on what others are up to. I did take a project to work on in the evenings when I had some free time. 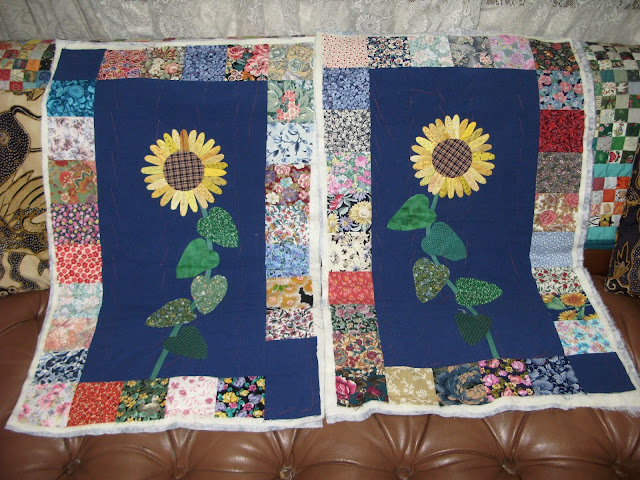 Our church has two staff retiring and I was asked to make a parting gift. One is the office secretary who has been in that job 25 years.  The other is the receptionist who has been there for 27 years. I decided to make table runners for each. One has a sunflower with 25 petals of all different fabric, the other 27 petals.I also used the same number of three-inch floral blocks in the border. Today I basted both with batting and backing and tomorrow I will check to see if there is a recommended bible verse about tending our garden ... or other suggestion. I am thinking of a sashiko design quilted in the background, and maybe the church logo in the corner blue blocks.

Wednesday, my son. Jon and family rolled into town for a ten-day visit. Thursday lunch was with all of us with my SIL and her son and wife ... then dinner with more of my husband's relatives... a half-sister and her family. Meanwhile, my Son-on-loan, Peter, is here on business for a couple of weeks.

I was expected to go with the family to Lake Nojiri, which was a special place for summertime fun when they were growing up. With Nikko in decline I didn't want to force her off on a sitter. Jon thought I should just take her to the vet and have her put down, but she does not seem to be suffering and I could never have enjoyed a holiday at that expense, so I let the gang go off on their adventure without me... scrubbed down the tiles in the entry ... and basted the runners ready to put in the first quilt stitches.

On hold is the borders of the baby quilt for my boss and piecing the backing for the floral quilt.. which will probably wait until the end of summer for the quilting to begin. I am also thinking about assembling a block for the partnership quilt ... deadline is the end of next month but a 15 cm. block shouldn't take too much time once I have my plan on paper (now roughly in my head)

I hope to slowly catch up with what others have been up to. Sunday the gang will return for more fun activities. Peter will leave on Tuesday and by the end of the week it will be quiet again ... maybe!
(if life doesn't get in the way again).
Posted by Julie Fukuda at 4:17 AM 7 comments: