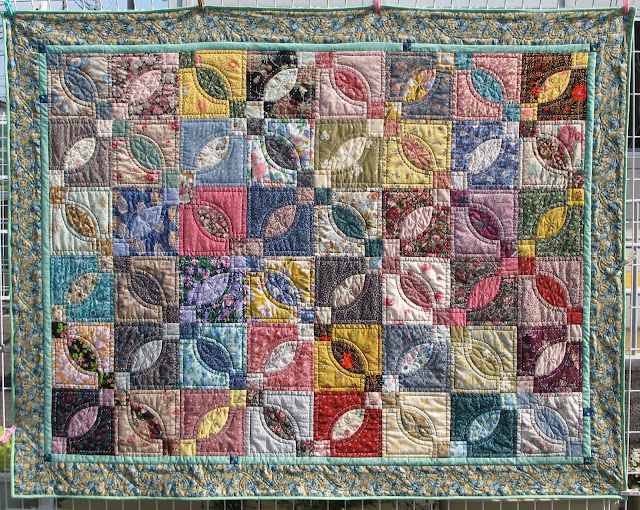 Well, the border linked hearts don't really show up very well, but it is now done and bound and labeled and ready to pass to the next step on its way to Austria.

Next in line should be a stewardship banner, and I have a plan in mind, but the committee is yet to discuss let alone approve the plan. Hopefully I won't be backed into the corner at the last minute.

I am thinking of beginning to sew the feedsack blocks together. I need to make one more block and then lay them out for arrangement. 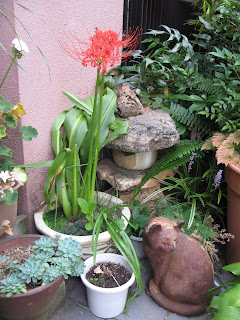 The spider lilies outside my front gate have finally bloomed. I think with so many tall buildings cutting off all but about 30 minutes of sun to the garden has made a big difference on the timing and amount of blooms my small garden produces.

Even the toad lilies are much later producing buds this year.

The weather is a wee bit cooler.
I have been leaving Nikko outside between the front door and the gate during the daytime. The space is a bit bigger than the genkan. Of course she knocks over flowerpots and tracks dirt all over, but it is easier to sweep up than the scrubbing down of the genkan tiles.

Tonight I will leave her out a bit longer until I return from church ... and see how it goes.
Posted by Julie Fukuda at 11:33 PM 14 comments: 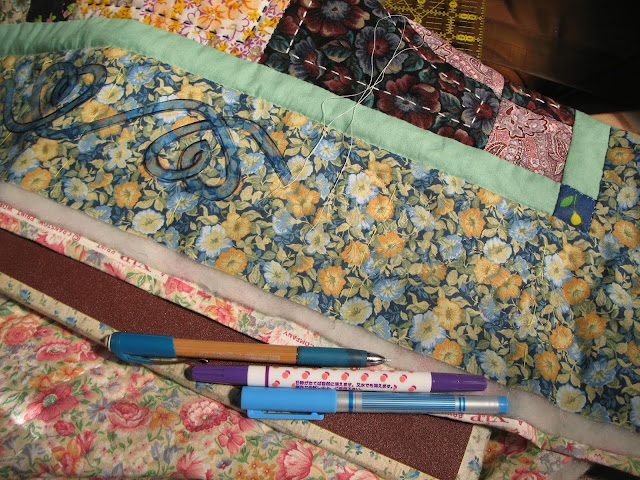 The big stitch is all done and next on the list is quilting the border.

I pulled out the stencil I made for the last baby quilt, but it was too large to fit this border. I really liked that design so decided to make a new stencil.

I am not sure the stitching will show at all but it showed up on the last busy print so I will keep working.

Hardest part is marking the fabric. My favorite marker is the sewline mechanical pencil but white really doesn't show up well.  The blue on blue is not so good either, though it will stay on the fabric until I put water on the lines with a paintbrush. The purple shows up the best, but because the markings disappear with time ... and the humidity speeds the time ... I have to mark as I go.

I really won't know the total results before I get to the end.

It looks like I will have a bit more time than expected this weekend because, though I had been planning to attend the choir retreat, the facility will not allow dogs ... even if they will be in a car or kennel and not go into buildings. I was planning to take Nikko and sleep with her in the van.
With her declining health, I don't want to hire a sitter and have been taking it day by day. This will be the first time for me to miss the practice and fellowship over many years, so it is a bit sad. I can practice at home and since I don't miss regular weekly practices, I should be able to learn my parts OK.

Though it is still humid, the weather is beginning to cool a bit. 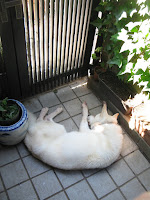 Today Nikko is enjoying a bit of outdoor time between the front door and the gate. I am trying to manage her meals and walks to reduce the number of times I have to spend scrubbing down the genkan area.

I hope by this time next week I will be looking for binding.
Posted by Julie Fukuda at 10:09 PM 7 comments: 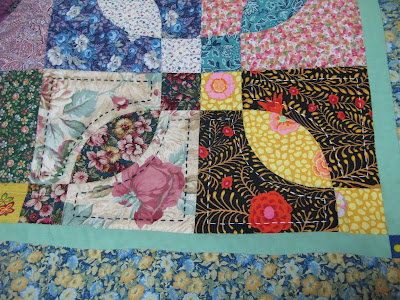 Yesterday I stopped at the local shop and bought white and navy sashiko thread.

Today I finished all the small area quilting and decided to start the big stitch to see how it shows up.

Though this is rather simple, I think it will be a lot easier than trying to mark a design on these busy prints.

The white sewline pencil shows up on all of the dark prints and maybe half of the light ones.

I may have to go shopping for a new ChakoAce in blue or purple ink.
The purple is easier to see but the ink disappears with time ... which is extremely short when there is a lot of humidity. The blue, I can remove with a paintbrush dipped in water.

I still have time to think about how I am going to manage marking the border.

Today is a holiday ... Respect for the aged day. As last year, I began the day delivering onigiri to the homeless. After a break during the hot summer, the homeless guys greeted me most warmly. Many asking me about Nikko, who was waiting in the car as I don't think she would be able to handle two flights of stairs.

The day is gray and rainy and I am rather glad to spend it quilting. My boss is now having her baby and it will be November before I am back to school. Last year I worked on this holiday and even though it was a day for the elderly, there was no chance of sitting on the train either into town or back. These days it would be even harder to get a seat. The trains are beginning to open up the space near the doors and they are doing it by removing "Silver Seats" which are intended for seniors and handicapped or expectant mothers.

Up until now, there have been 8 seats (four on each side) at the ends of each car. Recently the newer cars have just six at one end and three at the other ... making room for baby carts or wheelchairs. In addition, they have moved the hand grips up near the ceiling, out of reach of the majority of elderly people. Even my gorilla arms are not long enough to get a tight hold. Even with 8 seats, the chances of sitting were quite slim as the seats went to the youngest and most aggressive. Then, they pull out their cell phones so as not to see the elderly standing in front. I have often wondered if they have any idea that some day they might be elderly themselves.

From tomorrow, things get hectic so it is good to zone-out on the sofa with a quilt in my lap. Only competition for sitting is piles of sorted fabric and a box of sewing equipment.
Posted by Julie Fukuda at 11:44 PM 7 comments:

Lost in the garden 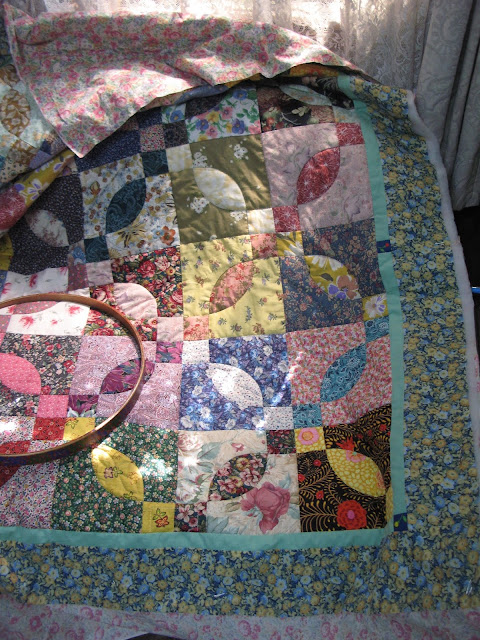 The in-the-ditch quilting has been finished and now the focus is on quilting within the blocks.

This quilt will be a gift to the mother of a friend for whom I made a baby quilt.
When the mother saw that quilt, she said she had always wanted to have a quilt, and since I had lots of floral prints recently "gifted", and I had wanted to try out the same pattern that I used with the black and white quilts, I thought this would be a good way to thank her for all her wonderful son has contributed to our church family.

Once I began quilting in the smaller sections of each block, I am seeing that with these busy prints, the quilting hardly shows at all.
It will not show on the back either as that is a busy floral print.


I plan to continue what I have started, but am now thinking that using the "big-stitch" quilting that I did on those black and white quilts would show up better. 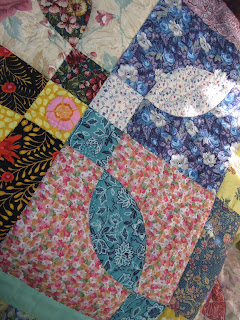 Maybe I can use white pearl cotton or sashiko thread as before with white on the darker areas and possibly navy blue on the light prints.

With "big-stitch" quilting, it is rather difficult to do fancy work so probably I would just use the outline stitches half an inch inside the seams.

I am thinking of doing the border with the linked hearts that I just used  on the last baby quilt. They showed up fairly well on that busy print, and that would add a bit more "real" quilting.
Do you think it is OK to combine the two styles? Or, should I just do it all in regular quilting whether it shows or not? 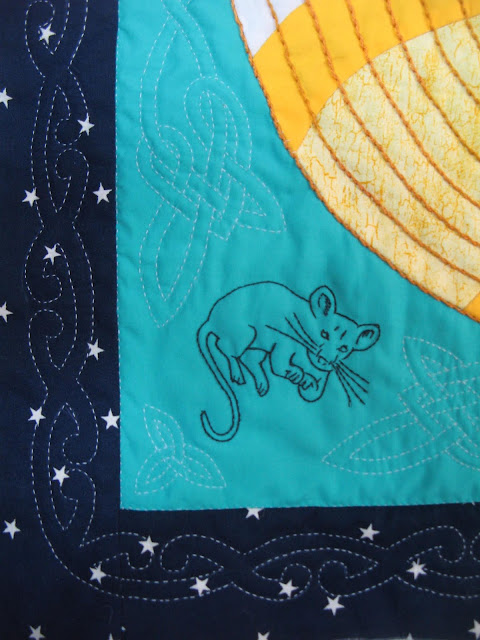 This morning the mouse watched the last stitch go into the border of the mandela.

Next I will have to decide on the binding.

I really don't want to spend money so I will have to dig out something from my collection of leftovers.

Red, yellow, grey,...
I may have some rainbow bias left over.

I also took the flower quilt up to the sauna in the upstairs apartment and pin-basted it after piecing the batting.

I was thinking of thread basting it but that would take several more hours and I need to go to get dog food before the rest of my Tuesday schedule hits the fan.
As it is, there is construction going on in my neighborhood and if I take the car as usual, I will need to drag the heavy bag back from the parking area because there is no room for cars to pass to get to my house ... so, I will take the train and a roller-bag as the walking distance is about the same. 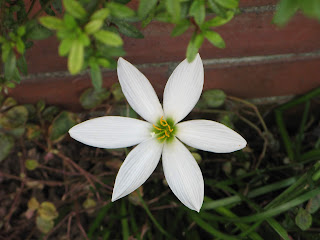 I am enjoying these volunteers blooming along the base of my garden wall.

These come up from bulbs and do not produce seeds. The flowers last a few days. 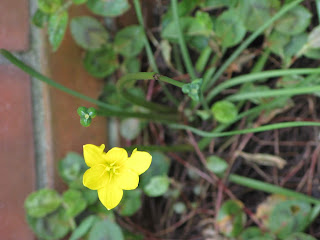 The yellow ones are a bit smaller and also come from bulbs.

You can see the seed pods with three pockets of ripening seeds.

These both begin blooming toward the end of summer and thrive on neglect ... my favorite kind of garden flower.
Maybe some member of the lily family?

Guess I should take some time to go through all my plant books. After all, I have enough of them!

Hoping now for a few cooler days  so I can get that quilt in the hoop and begin to quilt that fabric garden.
Posted by Julie Fukuda at 9:33 PM 5 comments: