At last the final stitches were put in and the label was sewn in place. The last lap was to the big PO, and after nearly seven months, Phoebe will be getting her quilt. 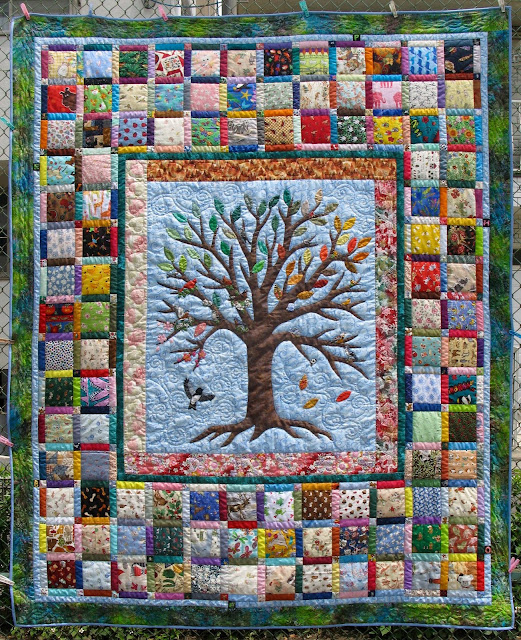 Granted, it is a single bed size so it can be used a bit longer than a baby bed coverlet. I am also glad the rain stopped long enough to take it to the park for a photo shoot. 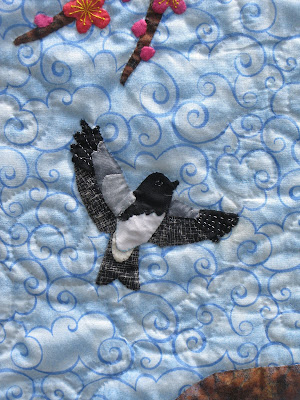 I hope I have learned my lesson about trying to add things to the center of a large quilt.

The tree with seasonal borders was originally made for a group event that never kicked off. I decided to add seasonal flowers and leaves to the tree, and since my DIL, Zia, is an avid birder, lots of birds found their way to the tree.

Unfortunately, I added the I-Spy borders early on and it was just too hard to work on the center without stuff getting caught up in the stitching.

I decided to quilt the border and bind the quilt to  get rid of all the stuff around the edges, thinking that might make things easier to add to the center.

Well, it did help some but not enough. I had a nice print of ducks on water that I was thinking of putting as a pond on the right side of the tree, but after adding the flying Phoebe, I gave up as it would have been just too troublesome and time consuming.


Instead, I just cut a small template and traced a karakusa design to fill in any of the larger un-quilted spaces. I put in the final stitches last night and added the label to the back before noon. Grabbing a quickie picture before heading off to the PO. Hopefully, it will make it without being returned as Kai's Big-boy quilt did.

The feed sack blocks are ready to be arranged and pieced together but have been laid aside while I assemble some floral blocks similar to the black and white quilt. I also need to get going on another I-spy for my boss's expected baby. The piecing goes pretty fast while travelling on the train but the larger work can take much time and needs to be done at home as it is soon too big to work on as carry-along.

Friday I will set all aside to meet friends and enjoy the Yokohama quilt show. Hopefully the names of the quilters will be readable in English so I can share a few with my blogging friends.
Posted by Julie Fukuda at 11:16 PM 12 comments: 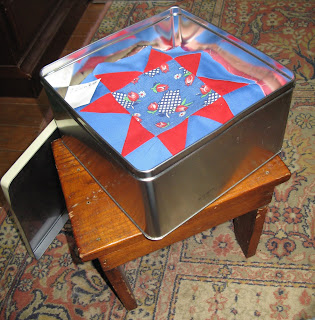 The binding is now on the baby quilt but the flying phoebe is struggling to get airborne.

There are 72 feed sack squares piled in this tin.
Having take-along work makes progress faster than I can plan the next step.  I do have an idea for a border using smaller scraps though, and it will be fun to arrange and put together.

The little stool the tin is on was a project for my cub scouts years ago. I put it in my genkan to sit on when putting on shoes or polishing shoes or tying shoelaces etc.

My pack is a lot smaller this year, as a large number of cubs just graduated to boy scouts, so I decided it would be fun to try this activity again.
Most of the age groups have requirements for constructing things.

Wednesday morning I went out to the Doit (Do it yourself) store and bought wood enough for four stools. Thursday I measured and cut the tops and ends for the kits and marked the boards for the side rails. Friday, the kids cut the rails along the penned lines and using glue and 20 nails, assembled the stools. 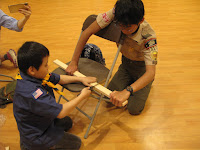 I had some help from the older boy scouts.

Here ... holding the wood rail while the cub saws it into three pieces.

Two are nailed to the sides and the last goes between the leg section at the bottom.

I took glue, nails, saws and hammers, and sandpaper. 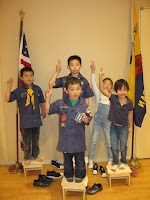 Here they are standing on their finished stools.

The one made by the brother and sister standing beside him couldn't have been more perfect had it been made by a professional carpenter, and that pair shared all the work ... sawing, hammering the nails, and sanding.

Looking at this picture, I just noticed that they all took off their shoes before stepping up on their stools.

The time ran over but it was such a joy to watch ... and when they finished, they swept up the sawdust and folded up the chairs, returning them to the storage area, and left that room pristine. (without orders from adults in the room).

Wednesday, after the Doit run, I had a call from my bank, wanting me to go in person to give them "my number". (a rather recent way the government has of keeping track of people) I could not do it over the phone and had to go there in person. Not all that close to my home, I set out on foot around 3:30 to do that task. There were papers to fill out (in Japanese) and I am not the speediest writing kanji. Then papers went somewhere to be checked, and more papers came back to be filled in. Luckily, I didn't have to read those papers and figure out what I was signing.
Then I asked if they could transfer another account from the same bank in a different location. (I had been told earlier that I would have to go all the way to that other branch and close the account in person and then carry the money back to my area ... that would take the better part of a day so the money just sat there many years).

Well, finally after a lot of checking while I waited, they got permission to move the accounts together. THEN, more papers to fill out and sign and mark with my seal. By the time I finished up, the bank had closed for the day and I had to be escorted out through the dark halls.

I made a quick stop at the local market in that area and started home in the dark. When I was almost home, I had to cross the local street. There is a wall and a big bush at that corner so one could look in both directions before stepping out.
Oops, that guy on the bike was driving without lights, and when I stepped out I was knocked flat in the street, my glasses flying beyond arm's length and a big bloody hole in the left knee of my jeans. Luckily, the car behind the bike rider stopped or I might have been run over.

A few hours on Thursday were spent appliqueing a sunflower over the hole on my last pair of bluejeans. BUT... Saturday, while hurrying out to meet my family for lunch, I tripped on an uneven walk and made a hole in the patch.  A guy who was walking behind, helped me up and pulled out two bandaids from his pocket for my bleeding hands. Well, that was nicer than the biker who just zoomed off in the dark. 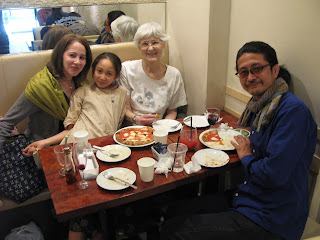 We had a nice lunch together for an early Mother's Day ...

Then we went back to the house where my super Son-in-law became "Mr fix-it" working on assorted items that were not working.
(Air-con needs a new filter ... printer needs new color cartridges to print in black and white ... TV needs someone who can read instructions ... )

Meanwhile, Norie sorted through stuff set aside needing to be read in Japanese. 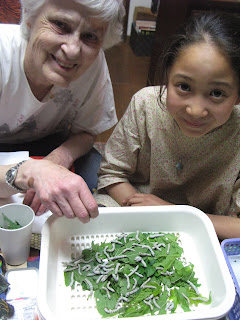 They had brought lots of mulberry leaves which Leia worked on pulling off the branches and we fed some to the silkworms, washing and storing the rest for the coming days.


It was a very timely occasion because, after passing another instar, those critters are eating at a faster pace.


With the small supply of leaves in this area, I would be hiking miles in the rain today without this timely gift.

Now, I am hoping the next supply can be gathered on the weekend camp with the cub scouts.
(If there is time before or after running the leatherwork project) 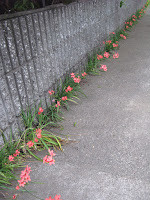 This morning, after the walk with Nikko, I swept our street to the corner and back. The past few years, I have planted seeds for these flowers in the crack between pavement and wall on a neighbor.

I think it looks a lot better than the weeds that had been coming up there. This is the back street for this house and the guy living here never tends anything, even his own plants.

The above trees are deciduous-evergreens, and now dropping huge amounts of leaves. I sweep each day, as there are always cigarette butts and should they cause a fire, with houses all only less than a meter between, a fire here could be very serious. 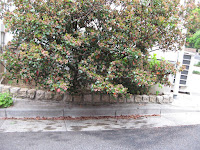 Across the street, this neighbor never sweeps and this shrub is super messy ... much of that mess blowing to my doorstep.

Two persimmon trees along the street are now dropping little round flowers that are going to be stuck on shoes and follow into every entry-way on the street. 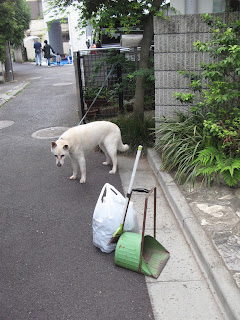 Nikko patiently waits while the empty bag ... yesterday morning was filled with packs of onigiri for the homeless ...

is now filling to the brim with sweepings.

She knows the next thing on the list will be breakfast.

With a bit of time leftover to fill in the blog before I get back to my list of "to dos".

and ... just so I don't forget the weekend ...
and how lucky I am to have such a marvelous collection of children ... 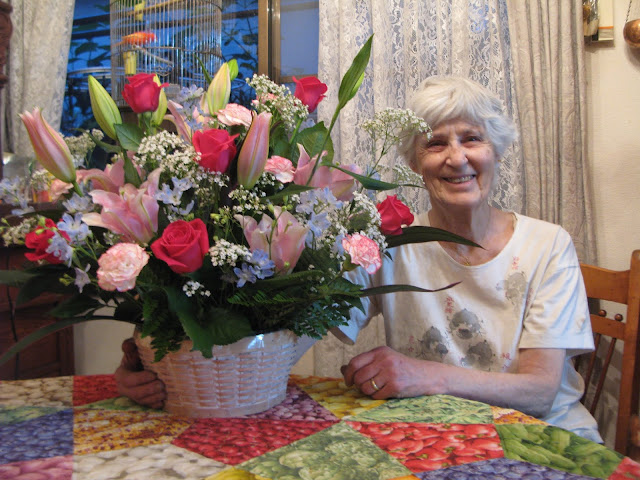 A large reminder from the Boston branch of the clan fills my heart with joy. Blessings abound!
Posted by Julie Fukuda at 7:37 PM 7 comments: