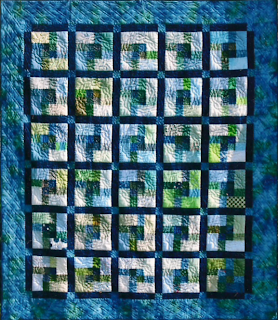 Started in April as a carry-along project, I went through my stash of greens and blues. I assembled 3 sizes into a 5" block and those were again combined to make a 10" block.

Designed to be sewed together, they just didn't work when laid out on Sue and Pete's living-room floor in June. At Sue and Cyndi's suggestion, the navy sashing and a blue+green border were added and Kimie helped with the arrangement during her July visit. 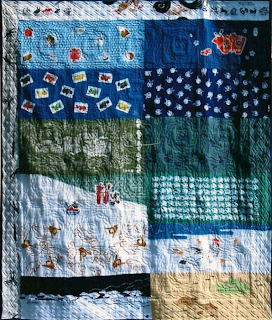 It didn't look like much of a "kids" quilt so I decided to use the zodiac animal towels for the reverse side. Paul made a trip to Ginza to pick up a dragon for the top border since little Paul is a dragon. To make the backing large enough I added a strip of dragonfly yukata fabric.

The idea is to have the family members sign their names and birthdays on the animals. I drafted the quilting design and made the templates. The idea was to have and interlocking pattern. I hope this will make up for his baby quilt which had become too small now that he has a big bed. 76" x 86" (193cm x 218.5 cm)
Posted by Julie Fukuda at 9:22 PM No comments: