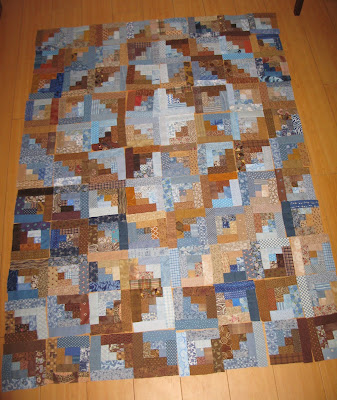 A few more logs were added to the cabin.

I have not yet decided where I want this to end up.

It might make a nice poncho, but I have one that works fine, made to use mostly at camp where I can keep warm at an evening campfire and also turn it into a blanket on my bed.

This is laid out on a dark apartment floor where I might play around more with the pattern.

I am not feeling rushed to completion, and have a few other things on my to do list. 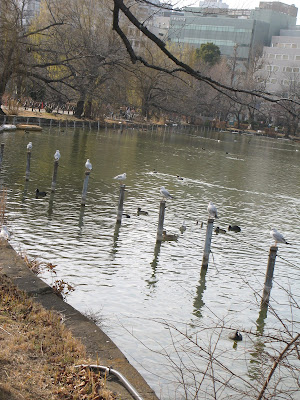 Last Saturday at this time. I was taking the scouts on a nature hike.

It is a yearly event, as scouts are required to identify plants and animals, and most leaders have no knowledge of either, even in their own countries.

Growing up in nature, this might be a much easier activity for American scouts living in the states, but in Tokyo, "animals in the wild" are mostly birds. One might find a rat on the streets of Shibuya in the early morning or a feral cat in the park, but the requirement is finding 10.

We meet at Ueno, at the top of the stairs next to the Keisei train station and walk up the hill, identifying plants and trees along the way.

There are multiples of the same plants, so the scouts can find more, once they have the clues for identification. We can also discuss how the plants are used.

About halfway up the hill, we head down an off street and through some temple grounds, then across to Shinobazu Pond.

In the winter, we can find migratory birds as well as local ones. I have made a laminated sheet of pictures of birds they might expect to see, so each boy takes a sheet and uses it to identify the birds on their own.  One of the younger boys noticed the row of gulls on each post, looking like a row of guards.

Most of the pond is full of reeds and lotus plants. Some areas have been opened up with cleaning. They were able to find both a great egret and a little egret and identify them by the color of their feet when they took off. They had to be quick to identify the little grebes diving and popping up here and there.

Though the picture looks dull, the day was quite sunny and warm and leaving early in the morning, I was quite over dressed. Considering the worry over the virus, the outdoor activity was a good plan and well timed.

Just the other day, I received a postcard from the NHK partnership quilts. There had been a TV showing earlier that I missed, not knowing the details of when to watch. I may see that later, as I hear my daughter's MIL had made a recording of the program and her son has put it on a DVD.

My block is in the sixth row from the top. The Ohio cardinal is perched above a map, holding a heart on a string in his beak. The theme was to be, "Love the Earth". Can you find him? The card itself is rather blurry and the blocks quite small, but it is nice to have this and recall the days when I met with my friends and went around the show, looking for each friend's block. I wonder how many quilts were made this time.  Perhaps not the usual 60+. I wonder if each person got a card with their block in it.  It is about that time of year when we would be making plans to meet and spend the day together. 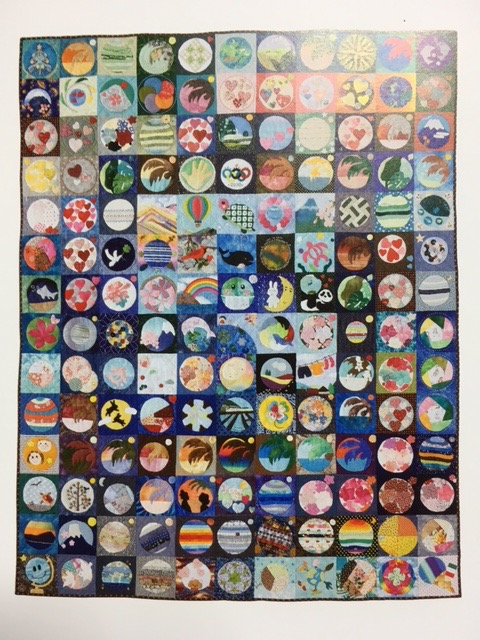 Hopefully, there will be a return of this activity by the time next year rolls around, and we can meet again in person...

This morning I went up to the cold unused apartment to lay out my finished log cabin blocks and see what I needed to do in order to get this project moving along. The sun was not out so the room was very cold, so I didn't bother arranging the blocks other than order of blue or brown. I think the lights and darks may require a bit of planning. 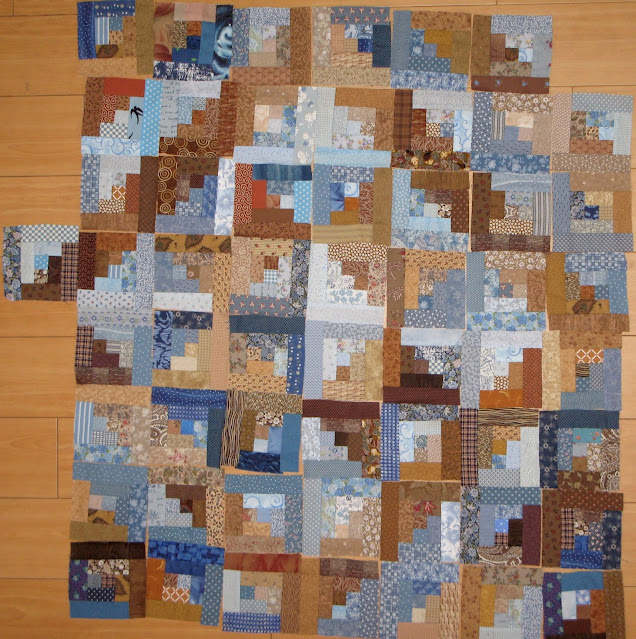 The rest of the day I have been digging through my scraps to find more logs to mark and chop.  I was able to cut about 14 more sets so I will have something to do during skype and zoom meetings ... or should I travel a bit by train. Can you see the Ohio Star beginning to form? I think the darker blocks will get moved to the outer edges. It makes me think of my grandfather who was born in a one-room log cabin in Ohio.

Here's hoping your year is off to a good start too.