Well, the I-Spy was finished over a week ago, and has been out a number of times, trying to get a photo shot. The days have been quite windy and the best lighting was competing with a balloon effect. Now, the problem is to find the right time of day when the sun is in a place that doesn't cause shadows from power lines ... and this neighborhood has an overload of those.  I have saved this shot, but am hoping to get a better one before passing it to it's new owner. 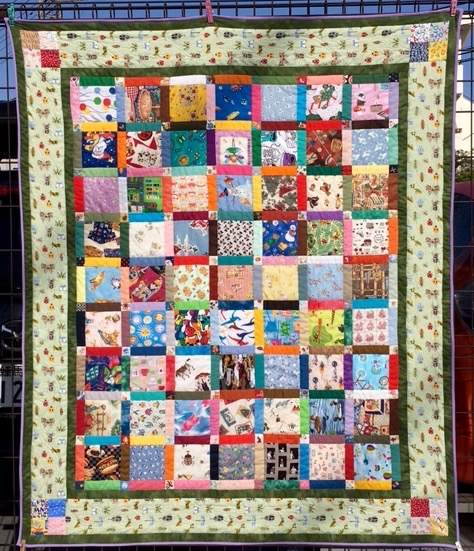 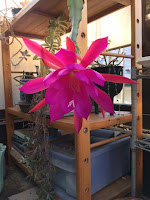 My orchid cactus has been showing off its lovely bloom. I moved it from my greenhouse to the front wall so it could be enjoyed by more than just me.

Unlike the Night-blooming cereus, it lasts several days. I was glad I didn't miss seeing it. 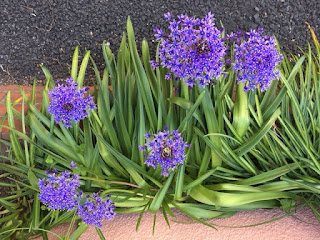 About three years ago, I rescued a few bulbs from the park where I weed.
Every year, just as the buds begin to come out, the "gardeners" (or whatever those guys are called), come out with weed whackers and cut these plants off about three inches above the ground. I had never seen them bloom, so I snatched up a couple of bulbs and planted them in the narrow strip between my house and the street. That is the only place that gets sun, and though only around a foot wide, the bulbs seem happy to have been left to show off their blooms. This is the second year of rewards.
This past week, I have had a visit from "Flat Stanley". 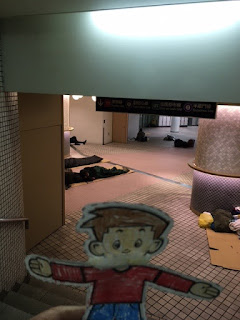 Monday morning, he went with me to deliver onigiri to the homeless in Shibuya.
He joined some zoom meetings, and visited a local shrine and nearby temples, helped with weeding in the park, and each time he sends pictures and a story back to my grandson, Ryden, in Oregon.
He is hoping to visit a place where carp-streamers are flying.
It is getting near that time of year.
I think all the students in Ryden's class will be sharing pictures and stories about where they have been.
I have had several visits from Flat Stanleys in the past, and I enjoy those adventures, looking at old things with new eyes.
House repairs are ongoing. The first floor section is almost done, but it seems the damage is coming in from the roof, so both second floor and greenhouse have now been opened and are up for repairs. The kotatsu cover awaits basting and several other challenges are vying for attention.
gotta get my day going.....

Actually, it has been almost a month since my last post. The kotatsu cover now is waiting for a space to baste it. My daughter  in Boston sent a nice large flannel sheet to use for the backing. I will have plenty of time to get it done before next winter ... though probably should avoid sitting under the hoop full of that warm quilt in the middle of the sauna called "summer". 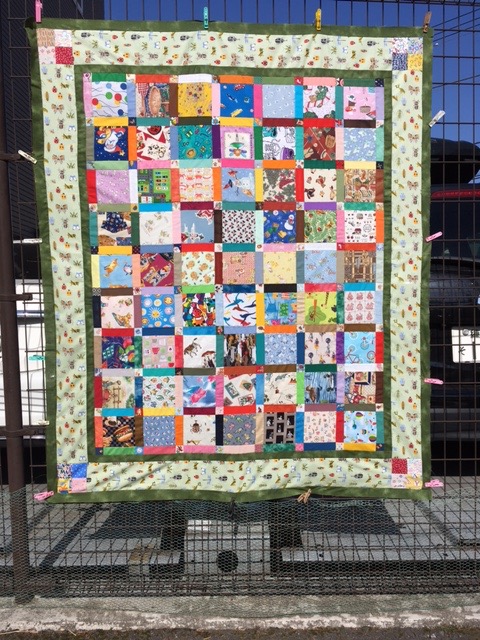 Meanwhile I have been working on an I-Spy quilt for a friend. The border went on Friday and Saturday I pieced strips of yukata fabric to make a backing with an all-over pattern. I did have some wide fabric I could have  used but the choice was either pink or white. Thinking of a quilt for kids to play on, I thought something patterned would be better and the texture of yukata fabric would not slip as easily off a napping child.

Basting was mostly done with pins, so it didn't take long, and the center is now in the hoop, getting in-the-ditch sewing. The four inch pictures should be OK without quilting as I used #60 thinsulate which doesn't shift.

While visiting over Easter, my son-in-law set up my new computer. I am still using my old one while trying to figure out how to use the new one. I did discover that the gadget I have to transfer pictures from my camera to the computer can not be connected. Do they make new gadgets for old cameras? Well, I won't be going shopping in town anytime soon.

Vaccines seem to be all talk without much action. A friend, living in the area of Tokyo that is scheduled first for shots, got his notice to schedule an appointment but the phone was busy with no answer and the website was "under development". On the day they began, all the shots were gone in two hours. Looks to me like "Fail to plan ... plan to fail". From what I hear, my area is way at the bottom of the list. Friday I had to go into town and the train was crammed. This morning after delivering onigiri to the homeless, the Shibuya area was full of groups of young people. With talk of tightening restrictions, everyone seems to be getting in their last outings before new rules are put in force. Having been glad to say goodbye to 2020, 2021 does not seem much different.

Guess I will skype and zoom with needle in hand for a lot longer. Today workers are working to remove a completely rotten and disintegrated corner post by my garden door. It is amazing the rest of the house is still standing. When the AC unit was installed outside years ago, rain water drained into the wall and the condition is similar to my greenhouse roof that had problems with leaks too. Here's hoping it will be fixed before the rainy season comes along. 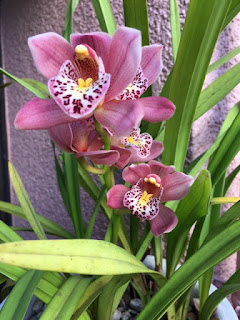 My cymbidium on a stand by the front door is greeting everyone passing by. All year long it sits in that pot with little or no attention other than maybe a sip of water during the dry season.
Doesn't it look like an open mouth shouting "Look at me!"
Or is it laughing at my surprise?
Hope you all have a touch of beauty and laughter in your lives as well.