Design planning in October '05 with Kendra Mortganaturn and Jaqueline Wein, we decided on a Japanese Blue & White theme.

We also decided to go for a queen sized quilt thinking it might go for a higher price.  Once the pattern was decided on we shopped for fabric.  The pictures were made mostly of fabric from mine or Kendra's stash.  By December the diamond blocks were pieced and we began the applique. 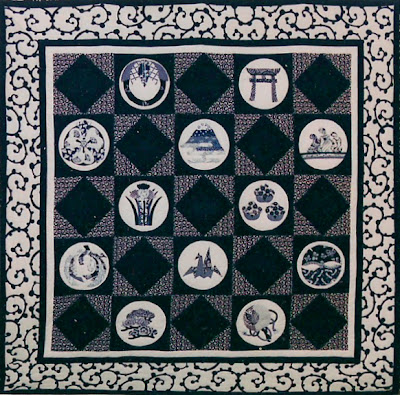 Once basting was done I brought the quilt home between sessions and quilted the diamonds with crest designs then the picture blocks and corner on the border and added a binding and a sleeve the last day, finishing February 28th.  The quilt was hung in the stairwell at the ELC for a few weeks.  It went to Yasuko Kent, one of the quilters and raised a whopping 700,000 Yen!
Posted by Julie Fukuda at 8:48 PM No comments: