End of a crazy year. Where did it go? 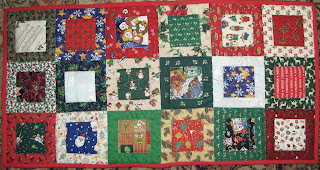 The year started and ended with table runners.

I had a tin of blocks made with holiday fabrics that I had used to make a small runner for my genkan above the shoe cupboard.
When Kimie was here, she pulled out some of the blocks and arranged them into a table runner.

This was mailed off to Oregon in March. (in plenty of time for this Christmas). 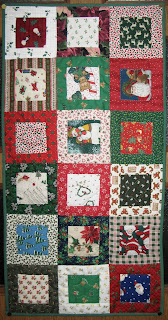 At the end of the year, I went back to those blocks and made a similar runner for a neighborhood friend.

That friend often leaves goodies at my door. I will come home or go out to find a bag of apples or a giant pear, or some other goodie in a bag hanging from my doorknob.

I put this together earlier in the week and took it with a note to hang at her door.

They look almost the same and the days inbetween seemed a lot the same too. 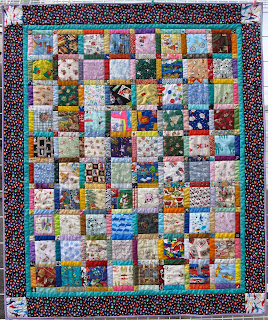 In March I finished an I-Spy quilt for a friend who has begun a NPO for teaching English to orphans and other children in care homes, hoping that having English skills might help them find jobs as they age out of the homes.
I think making a game of learning would take some of the pressure off. I put a pocket on the back with a couple of beanbags they might toss in a game.
In March I also finished a quilt I had made to donate to the church for raising money, hopefully to cover what I could no longer donate with my teaching job ending in mid February.
"My Tithe" was raffled off by the Outreach ministry throughout November  and raised money for an orphanage our church supports as well as the homeless ministry.
Though the raffle was on line mostly, it did pretty well. 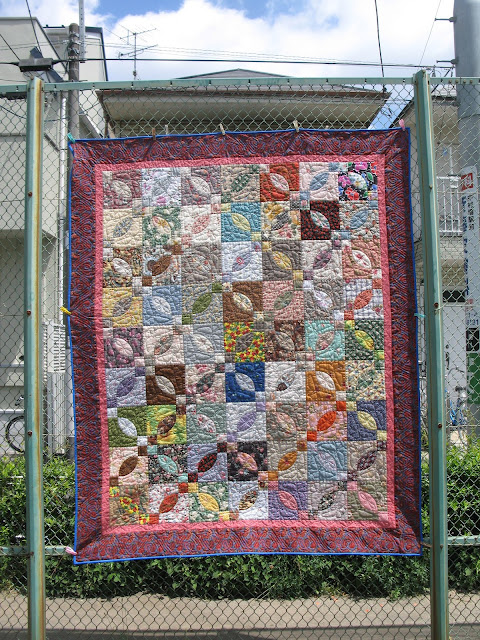 The family who won it was very happy. I had made them an I-Spy quilt when their youngest was born, and they sent me a video of that little guy playing I-Spy among the flower prints. 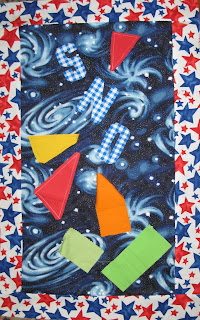 In early July I was asked to make something for a family who was leaving.
They had been very active running "Saturday Night Out". a once a month fun activity for members and families, with games, a dinner, and a study group/discussion while the children had some entertainment.
This had words of thanks within the design.
I didn't have a lot of time to come up with a plan. 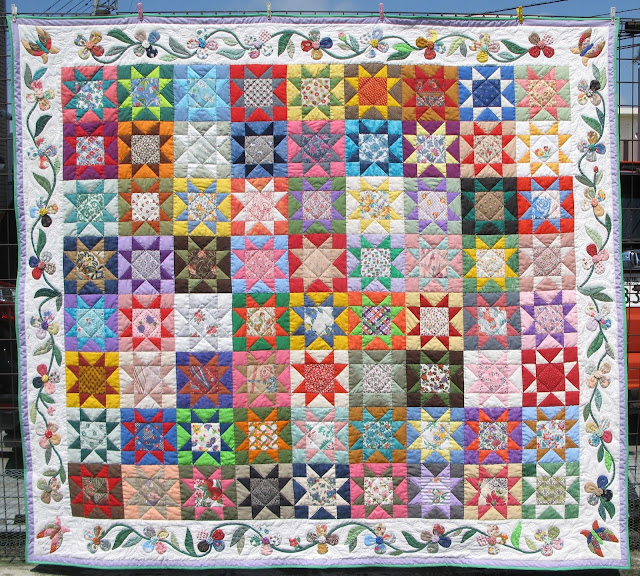 In mid July I put the final stitches into my quilt "Staring Feed Sacks" I still have  some unused feed sack prints and am thinking I would like to make another quilt using them. I liked this setting because it didn't cut the prints into small pieces. I am quite satisfied with the results and those prints bring back many memories of things made using those fabrics. 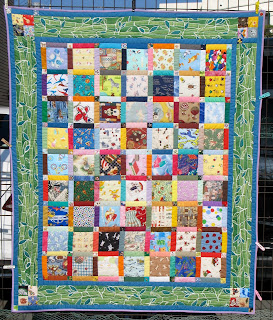 The month of August, I put together another I-Spy quilt.
This one for the new associate Pastor's family. I finished it August 27th in time for their arrival and two week quarantine. I made a set of cards to go with it with English on one side and Japanese on the other.
They have a young son and are expecting another child so I thought this might be a welcoming gift to greet them.
Meanwhile I had been working on small houses ... one for each day of virus confinement. Those were only 3"x 4" when finished, and going into a tin. It was a great way to use lots of small scraps.
I had plenty of time to think about what I would be doing with them.
Meanwhile, in October, I was asked to come up with a Stewardship Banner.  This is the 11th year in a row that I have made one. The theme was selected and passed to me October 15th,  It reminded me of my father making new roses by hybridising from seed. The hands were embroidered over a background pieced by light floral prints. 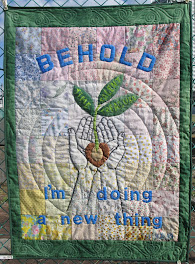 The hanging sleeve was added the 21st of October and I left it by the back door of the church when I went to pick up the onigiri for delivery to the homeless. 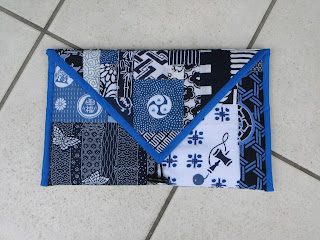 A laptop carrying case is still sitting in my entryway waiting for the US postal service to get its act together,
I made it for my daughter's birthday earlier in the summer, but the US is still not accepting anything other than letters,
The houses finally made it into a quilt. 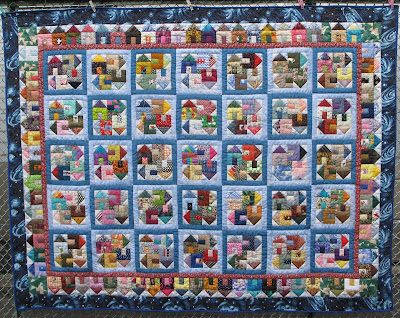 This was finally finished last week.
Two of the houses are dedicated to friends who have passed away this year.
One, a longtime missionary in Japan, and mother-in-law to my eldest daughter.
The other a friend who contributed much of the fabrics used here.
this joined the table runner I had finished in November using extra houses,

SO ... here is the Coronaville pair, and yet the down time goes on.
Maybe I have enough of a reminder of those down days. 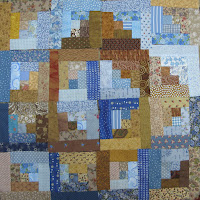 Still in the wings is my log cabin challenge ... moved aside when the Tokyo Dome Quilt show was cancelled.
I'm still thinking about what I want to make
My partnership block seems to have gone into a quilt. I think it was shown on TV but I didn't get to see it.
Meanwhile, Christmas has come and gone as just another day ... other than a group skype with the kids and a visit to my friend, Wally, at his senior home.
The past week has been spent trying to get my living area a bit better organized, and the dust removed more or less. 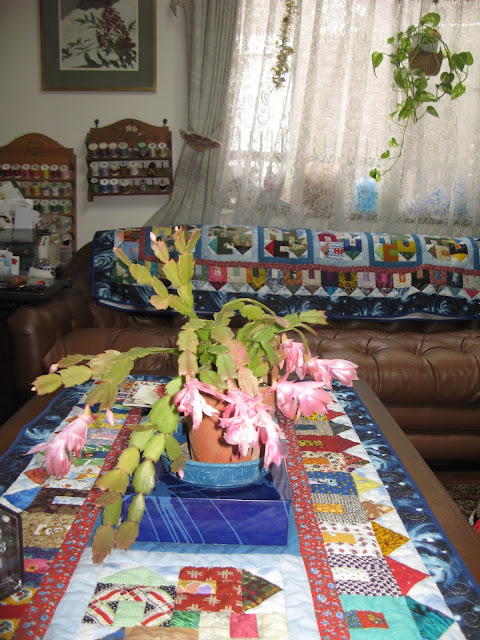 So, from my semi-tidy livingroom to yours, I send best wishes for a happy and productive New Year. 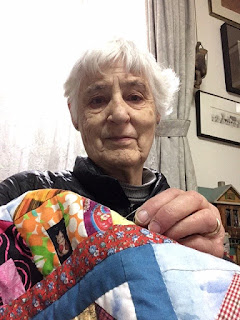 With more "down time", my Coronaville quilt is progressing toward the outer borders. Now that many trees are down to their last leaves,  taking sweeping breaks are less frequent. Zoom time keeps going up and my note taking is done in stitches.

After making a sore hole in my middle fingernail and several bloody holes in my index finger, I began to use some rubber thimbles on both. The one on the middle finger was soon torn to bits.

I used to have a silver thimble. In my family it was a traditional gift for a girl's 20th birthday. Mine had a band of cloisonne flowers and my name and the date engraved on the inside rim. Long ago, while sitting in the bleachers at the junior high, that thimble rolled off and fell to the floor under the bleachers. I quickly went to the end and crawled underneath looking for it, not to be found. Thinking it might have rolled to the front under the shorter steps, I waited until the game was over and the people were gone to search again, but it was not to be found ... even in the final cleaning of the gym. In all the years since, I have never found a comfortable replacement. L size? M size? if they are in a plastic envelope, the fit is no guarantee. I have a metal one that is too tight to fit all the way, and a plastic one that falls off between stitches.

Last night as I was just putting in a few last stitches before going to bed, I found a thread I had left waiting until I got to that part. Instead of taking the needle from the thread I had been using, I grabbed another needle from my pin cushion. It had a larger eye so was easy to thread and surprise, the eye was not attacking my fingers. Maybe my stitches are not so small as with the little needle, but this is a bed cover. I do not plan to enter it in a quilt show so no one will be counting the stitches. They hardly show as I am quilting in the ditch, and since the backing is white, they don't show on the back either. I think my fingers have just won a reprieve. 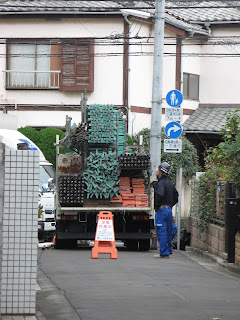 Meanwhile, this seems to be the "year of reform". It started with the house next to the one across the street to the west, then the one next door to the south. All up and down the side streets, there are frames surrounding houses that are getting renovations of paint or new roofing etc.

Last week, while I was sweeping, this huge truck piled high with frames, was trying to get down the street past my house, 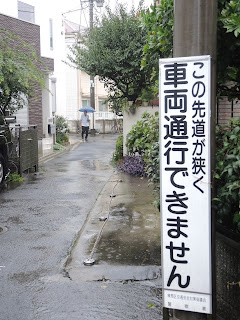 My Japanese isn't all that good, but here is the sign that truck had driven past. It was already with the front end in the parking space of my neighbor (usually filled by her small car) and trying to get between the fence on the left side and my wall on the right. My plum tree is now farther over the street than when this picture was taken, but, had that truck managed to fit through that space, it would have taken out the tree as well.
I just stood there in the middle of that space, keeping the truck at bay, until a worker ran up and talked the driver into backing up and taking the wider street to the south across from the sign.
I felt like asking that driver if he could read. Even if he had managed to get past my house, that large of a truck could never have made it around the corner and down that small street. As it was, he had trouble backing from that one-way street into the space where he parked.  Another house under renovation ... and less than an hour later, there was another truck in that same spot, blocking the street the first one went down, and setting up scaffolding around the second one from the corner. This morning my doorbell rang and there was a worker asking me to be the next to be renovated. Hah! All we need is one more truck. And, how would they set up scaffolding in the 18inches of space between my house and the wall that is filled with AC units? I was glad to say I am not the owner. 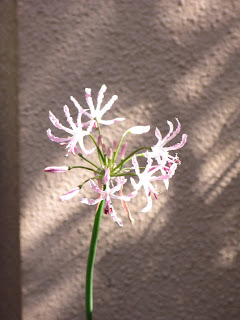 And, now with the autumnal equinox well over, here is my Christmas spiderlily.
It is enjoying a bit of morning sun, reflected off the windows of the renovated house to the southwest. Unlike it's bright red cousins that pop up in the fall, this one sends up it's leaves first.
The flowers open slowly day-by-day and it lasts long into the new year. There are still a few buds to open and this picture doesn't do justice to the lovely purple color.
So ... now, to the rhythm of hammering in all directions, I will go back to a bit of stitching, thinking that next is the outer border with no seam allowances to challenge my needle.