LOOOOONG Ago... in the early 1960s, I enjoyed doing needlepoint. My first project was a handbag that was just the size and shape I needed. It went with me when I travelled from Canada to Scotland, through Great Britain and through Europe the summer of 1961, only to be stolen in New York on my way back to Ohio. 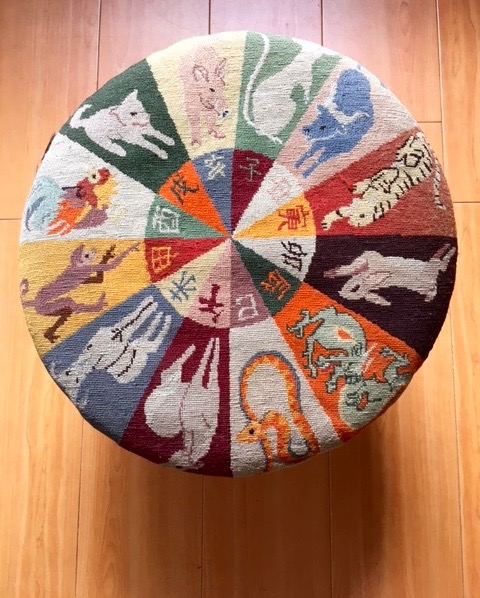 My next project was this stool cover. I finished it sometime in 1963, as it was one of the items that came with me to my new home in Tokyo. 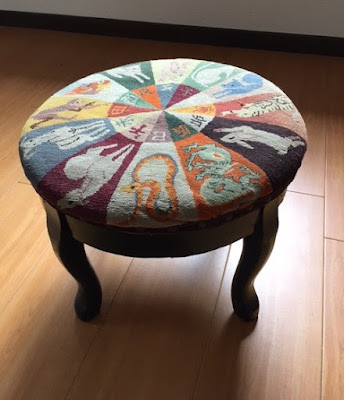 The wooden frame was something I assembled from a kit, bought at a hardware store in Cleveland.

Over many years, the puffiness of the filling has become tired, and the colors are less bright.

I have never had a problem sitting on my knees, but, over the years, it assisted visitors coming to a home without tables and chairs.

As life went to fewer activities  on the floor, it became a foot stool.

Then I got a rocker with its own footstool and later Paul got a massage chair and this stool was somewhat demoted to an accessory. 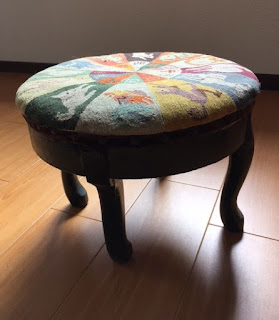 It was still part of the family, but often considered something to be used when the shorter member of the family needed to reach something on a high shelf.
That member, not having a good sense of balance, somehow managed to break off the legs of the stool, and knowing it had somewhat of a value to the person who made  it, took it off to someone to "fix".
Now, how did I find out? You have only to look at the two legs turned in the wrong direction. Of course It can still be used as a footstool, but probably not very secure for sitting on.  No longer worthy of taking up space in our tiny livingroom,  it has wandered to assorted locations where it only gathers dust and is forgotten. 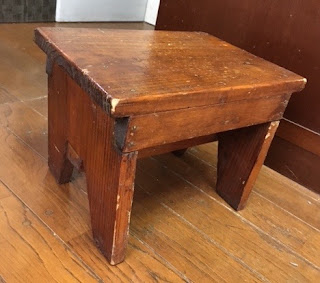 Most handy and least likely to be damaged is this test model I made for cub scouts to build at a pack meeting.

The design is easy to assemble, even for younger scouts, and very sturdy. It can take all the abuse a stool gets in daily life, and I have little concern with chips and scratches.

Yet... my old needlepoint stool calls out for a few more years in the picture. I wonder if the legs can be turned back or if it might be used as is.

What would you do?

After making three "Big Boy" quilts to replace single bed size baby quilts made long ago, I have started on the first of the "Big Girl" quilts. Maile is at the top of the list, and her request has changed with time. After seeing a Morning Star quilt made years ago, she said she wanted one of those.

I dug out my collection of yukata fabrics, and, not using a sewing machine, I have begun marking and cutting diamond blocks to assemble in star points. Now, half of the points are together and I can get an  idea of how this will look.

I have yet to decide on the background . I am thinking of Hawaiian style blocks with hibiscus flowers. Since it will be a double bed size, I plan to put some of these fabrics in the border as well.  Hopefully I will get a bit of input as to the main colors. I could stick with blue and white ... dark on light or light on dark. or I could add a third color. I may assemble this as a quilt-as-you-go to make it a bit easier to quilt.

Hopefully, by the time I get to the quilting stage, the sauna weather will have ended. 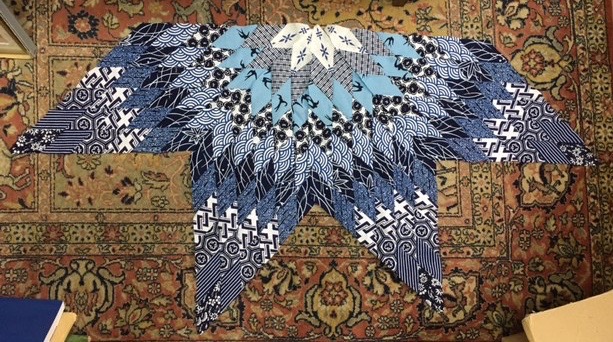 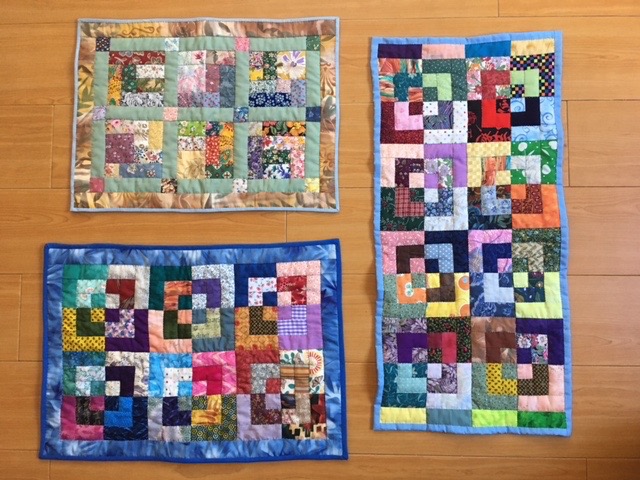 July 15th, 16th, and 18th saw finishes. The small one I intend to give to a neighbor next time I see her, The bento box on the left will wait to be snatched up, and the long runner is now waiting to take its place on my daughter's entryway shoe cupboard.
I realized I never posted a picture of the finished kotatsu cover. 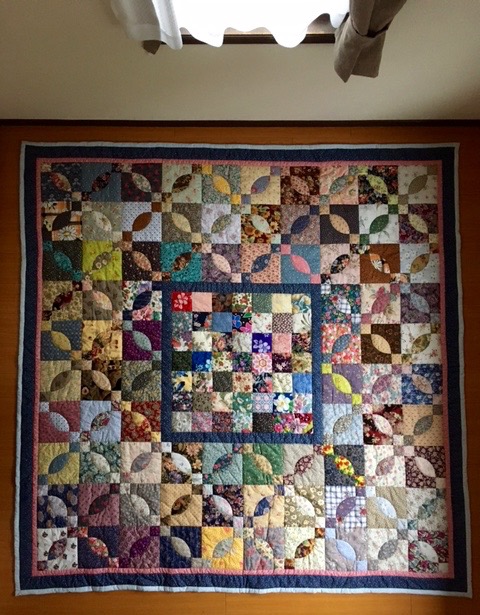 I had to take a picture of it laid out on the floor because it is way too big and heavy to hang on the park fence. I turned the flannel backing to the front for binding. I'm not sure if my daughter will want more quilting, but I really like it the way it is, so soft and cuddly.  The batting is thinsulate #80 and even with light quilting, it is not going to shift. This is about 88" square.
I have a number of other things on my list. My next in line granddaughter is ready for her "big girl" quilt. I have been short on gifted items to the kids. Thinking of a pieced shoulder bag for Marie, and Ken would like a king size quilt with a blue and white Japanese style design. I have lots of ideas for these ... so why am I playing around with little scrappy things. I guess it is just because I like to have something finished that doesn't take forever. The heat and humidity have been a great deterrent too. The rain did bring two cool days on Monday and Tuesday, but morning wind blew all the clouds away and the hot sun took over.
The anniversary banner is laid out with paper for sketching. Now waiting for the days to cool off a bit so I won't drip sweat all over the layout. Taking it all one day at a time...
Posted by Julie Fukuda at 1:21 AM 8 comments:

Planning is underway for the anniversary banner, and I am looking at the small pieced blocks that were replaced with color-coordinated ones.  There are not enough to make anything big ... though I have plenty of scraps that I could use to make more... It might be fun to just put a few together that I could use as gifts for friends. Hmmm. I wonder what might be a useful gift.

Not everyone has a square table. Mine is round and a long runner would not fit well.  Maybe a small runner or a large mug rug would find a use. I have one on my getabako in the genkan, and another on the shelf above my trash bins. A quilted item to set a hot tea pot along with cups and milk or sugar containers... Or a little luncheon mat... 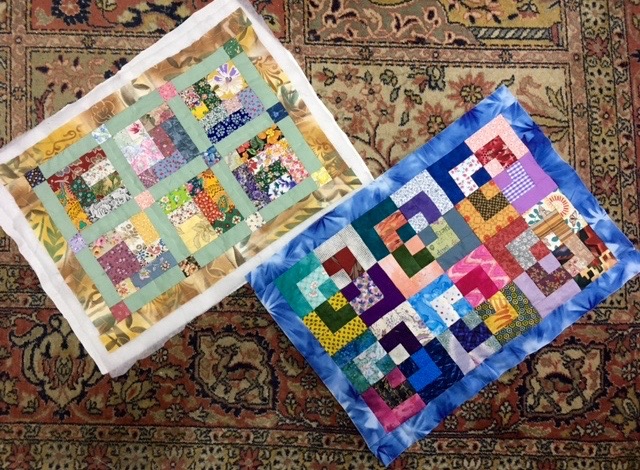 The one on the left is basted and ready for quilting. The floral blocks were intended to be used in the banner.  The one on the right is the "Bento box" pattern. I used some of these blocks for a gift and the rest for a long runner for my coffee table.  I have made a number of floral quarter-blocks with nothing in mind other than to use up some small scraps.

Both of these patterns use one-inch strips. Anything smaller than a square inch , I toss in the waste bin ... though I have in the past used one-inch half-square triangles.  So... now I have a little quilting to fill my zoom time.  I don't know where these will end up, but hopefully there is someone out there who likes scraps as much as I do. I wonder if these small squares might make a quilt. In the past, I used some to make a "crumb quilt". That was snatched up by my daughter, Kimie. Then I was lucky to have a rather large piece of dark "gifted" fabric for setting the blocks. I would rather not have to buy any more fabric to use in setting blocks.