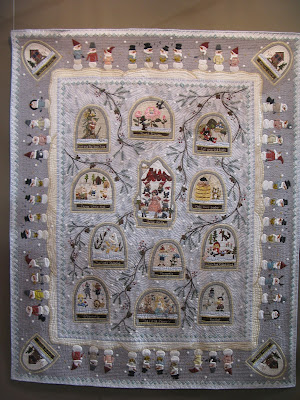 As I have mentioned before. other than prize winners, the only quilts that have the quilter's name posted in roman lettering are those made by 60 or so "well known" quilters and teachers.

This quilt, using a lot of "Japanese Taupe" was made by Osami Gonohe

It is called  "Snow Dome" and besides the number of scenic domes, there are lots of cute snow people lined up around the borders. 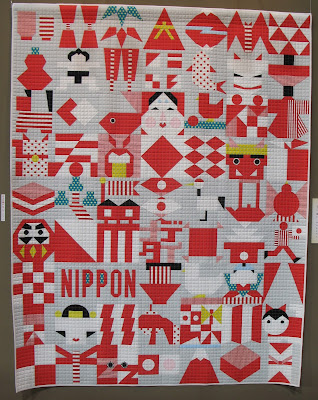 The title of this is "Japanese Patterns".

It was made by Kumiko Fujita and if you look closely there is a lot of variety among those red and white blocks ... A sumo wrestler, lanterns, demons, daruma, kimono, fish, flags, cat, teapot, and many more items. 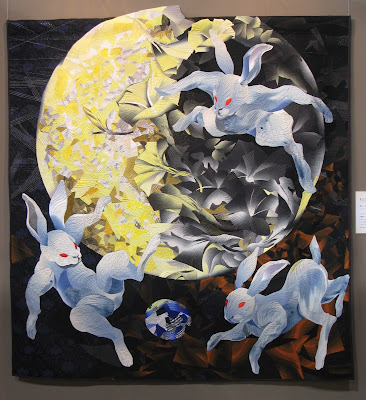 How about these soccer playing bunnies?

Usually the rabbit in the moon is busily pounding mochi but his attention seems to be diverted by the game in progress.

Made by Miwako Mogami 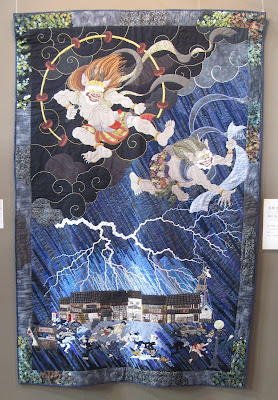 
A lot of work must have gone into this one... 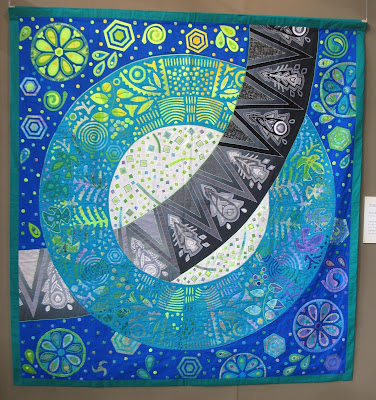 
Lots and lots of detailed reverse applique in this one. 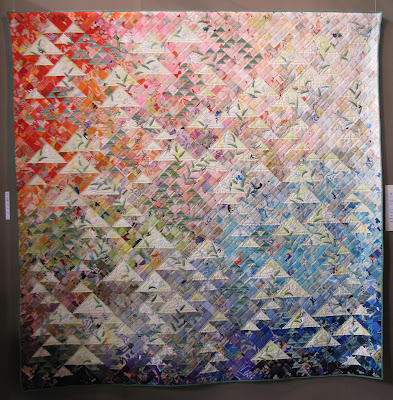 I see a lot of leaves but the lilies are well hidden among all those colorful scraps. 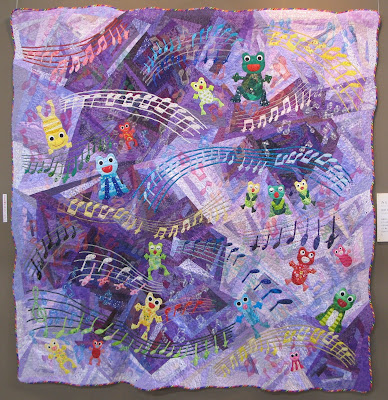 With all those frogs, I wonder what the song would sound like? It might remind me of my house with a pond so long ago... 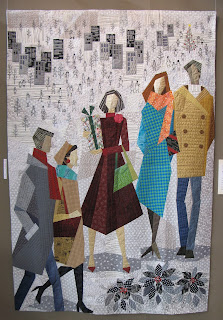 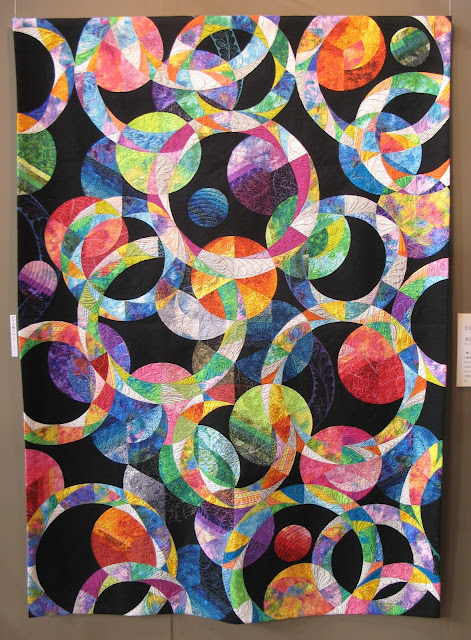 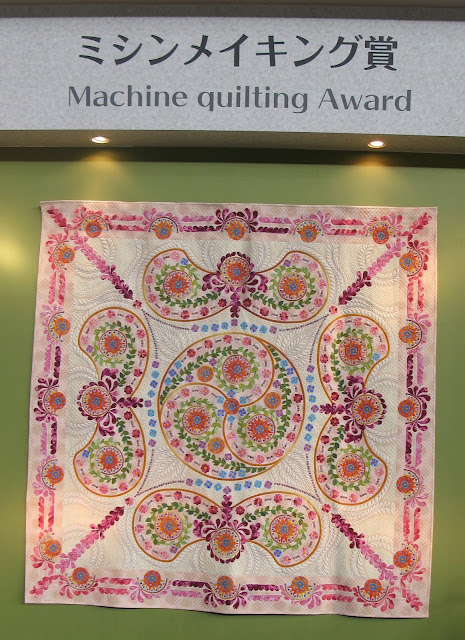 And a few of the winners ... this one "Kawaii" by Rumiko Oiwa.
I don't know how this one was picked as I saw many more that caught my eye. 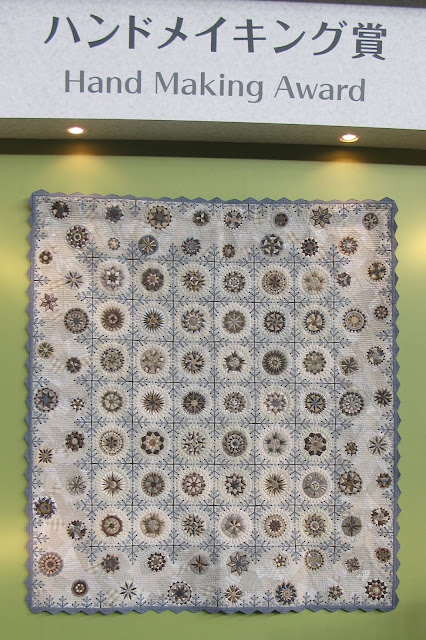 The title was in Japanese ... "Winter flowers" by Hiroko Tamai
Yes, a lot of fine detail but it seems the judges liked rather mild quilts. 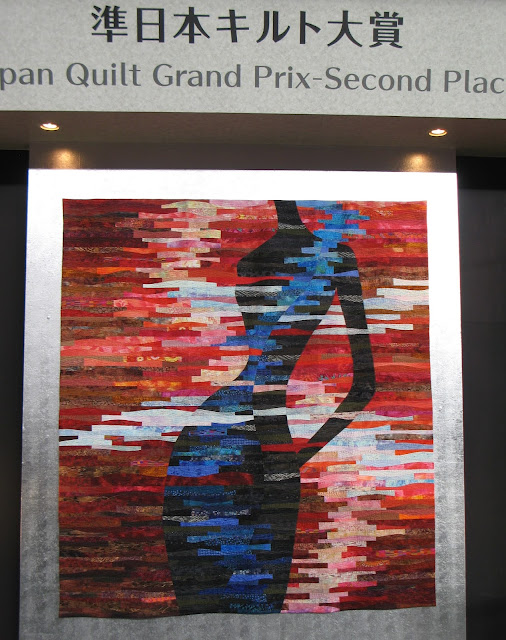 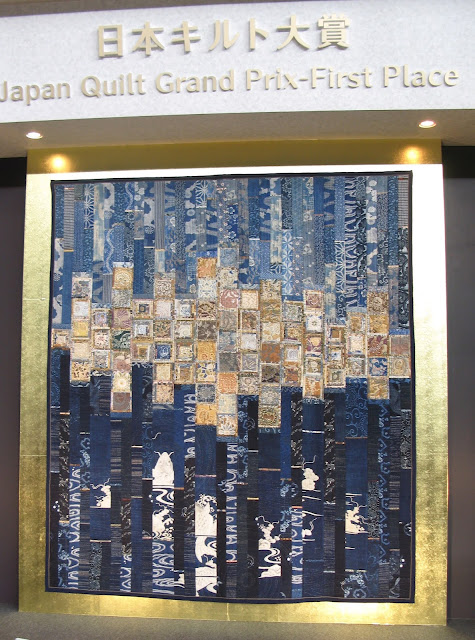 And the grand prize went to this one by Sumiko Nagami ... Title in kanji had something about rain. 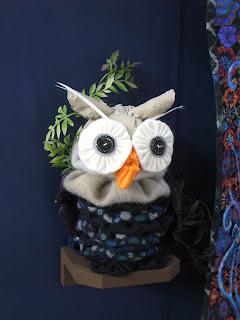 And, walking through the displays, I met this owl. 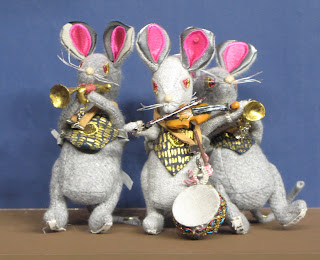 And, of course, being the "year of the rat" there were a number of these little critters as well.
Had it not been for the tails, I could have mistaken them for rabbits with those long ears. 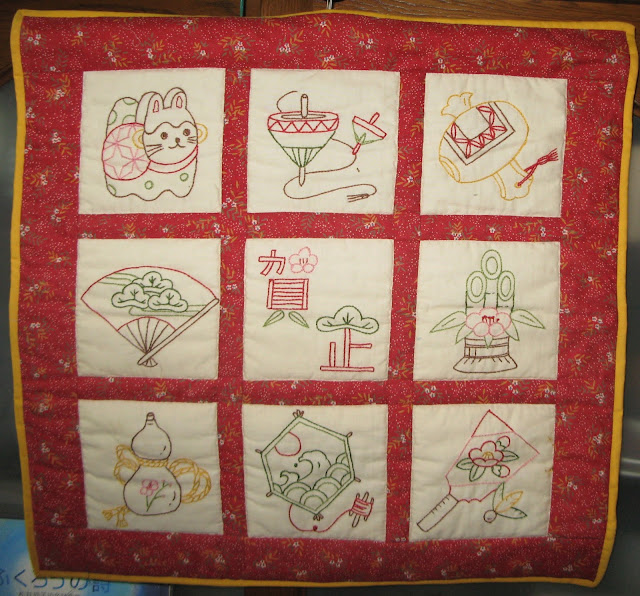 And now, with the lunar New Year having passed, it is time for me to roll up this little hanging ...
one of the first quilted items I made after getting married and coming to Tokyo.
I think I found a "kit" in the local department store.
Not much like that fancy red and white one, but just as typically Japanese.
Posted by Julie Fukuda at 12:11 AM 9 comments: 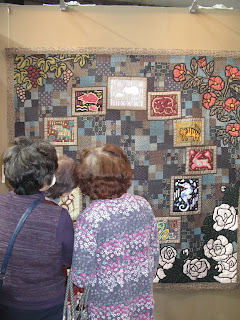 There were so many quilts at the show that I wished to take pictures of, but ....

This looked like something I would have liked a good look at but this is the closest I could get.
It looks like a mola with the 12 animals of the zodiac.

There were several quilts I put on my "later" list, hoping to get a better view. 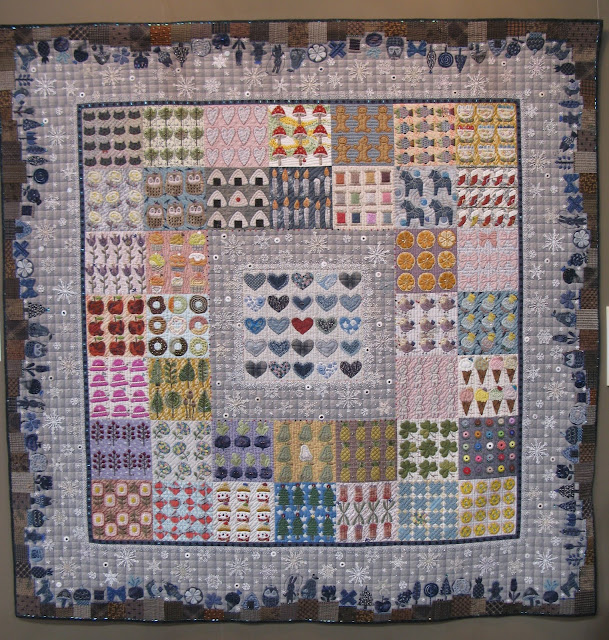 This is one that gathered crowds of viewers, and when I got close enough to see it I think I know why. 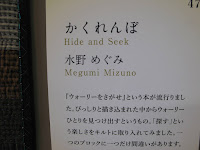 Kakurembo is a game of hide and seek played by children.

I think this was more of an "I-Spy" quilt and the viewers were playing along. I returned a number of times and finally could get a picture to share. 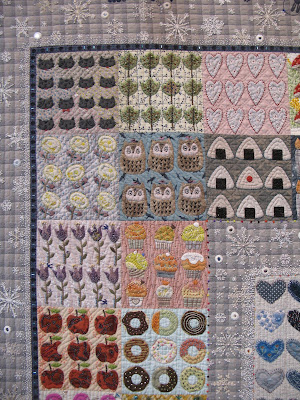 Each section block has a number of the same items.

The thing to find was the one that was "different".

Not hard to find the onigiri with the plum in the center or the flower leaning the other way,
But ... how about those doughnuts? 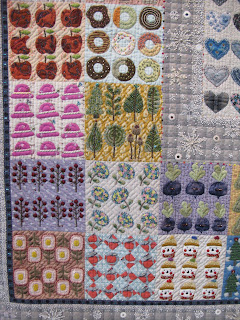 Looks like someone took a bite out of that apple....

and one of those leaves looks more like a mushroom... 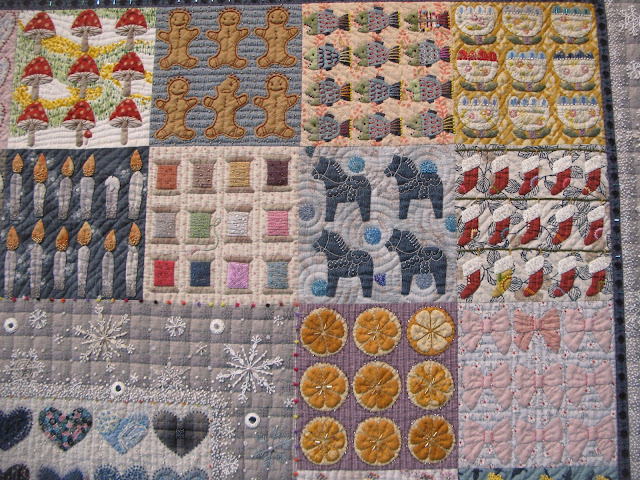 I guess you might see why the viewers were gathered so closely for so much of the day. The use of "Japanese Taupe" worked well in this quilt ... 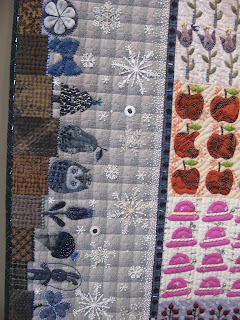 Look at the charming detail in the borders...

Lots of embroidery and embellishments....


Judging from the fact that the quilter's name was on the post, this was probably made by one of the "well known" quilters.

I have begun enquiring of ways to find those in charge of the show in order to convince them that a proclaimed "international" show needs to have the names of the quilters in roman lettering. It wouldn't be that hard to add one more blank to the application and every person ... even my pre-school artists ... know how to write their names that way.

Wouldn't it be nice if I could show all my pictures while giving those marvelous artists credit for what must have taken years to do?
Posted by Julie Fukuda at 10:22 PM 6 comments: