Finished with time to spare

The quilting was just a simple heart in each square and I finished on Sunday. I had planned to purchase binding on my way home from school Monday, but it was beginning to rain and I had not gone out in the morning with my umbrella.  Tuesday Nikko and I walked one station over to the local shop and I picked out some pink binding that matched the color of the blossoms. 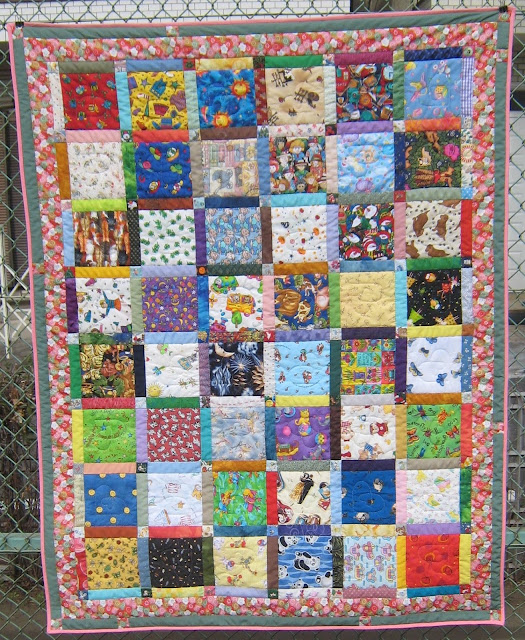 This afternoon I finished turning the binding and tonight I will take the quilt to choir and turn it over to the choir president. The idea is to  have the choir members sign on the hand prints. I have signed mine ... a left hand of course. 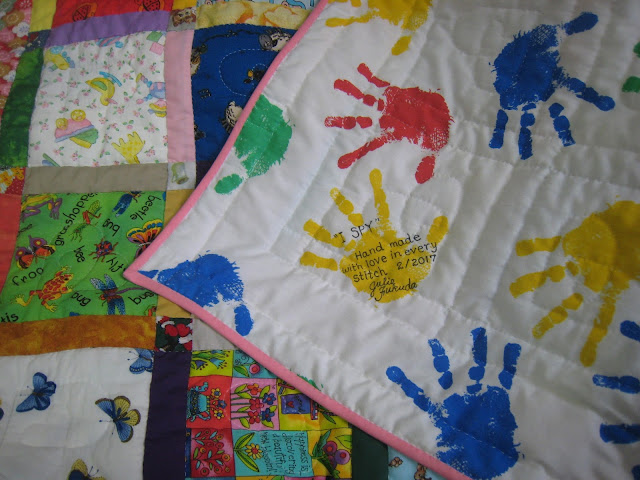 The batting I used is #60  Thinsulate. It doesn't really need a lot of quilting to keep it from shifting as I think it is intended to be used in clothing.

I placed the blocks facing up and down, left and right, so that there would be no top or bottom other than how the quilt is used. I also hope it will be used to play "I Spy", as words are the most important thing you can give a child. (and this child will be in a bi-lingual home.) There are plenty of items that might be counted too so I hope it will add a bit of fun.

This week as I sat beside four non-sleepers during "nap-time" I couldn't help recalling my own childhood. Our school used woven straw mats instead of the cushions these kids have and no blankets for covering... and certainly there were no cuddly stuffed animals, but I am sure I was a non-sleeper too. I remember being placed in the cloak-room where I wouldn't disturb others.  No cloak room in our school but I'll bet those kids would have had fun counting cats or frogs or stars or bunnies or just hunting for items. I remember being separated from my twin at home and being entertained by the quilt on my parent's bed ... following the rows of stitches with my finger and finding and counting matching fabrics.

And ... now that this project is done, I am getting excited about the next thing on my list ... the belated Christmas present for my dear #3 daughter! Time to go up and sort scraps again and hope to find the items I need.
Posted by Julie Fukuda at 10:31 PM 12 comments:

I decided to let the backing decide the size of the quilt. It is now 43inches by 55 inches. Probably will be large enough to use for some time. 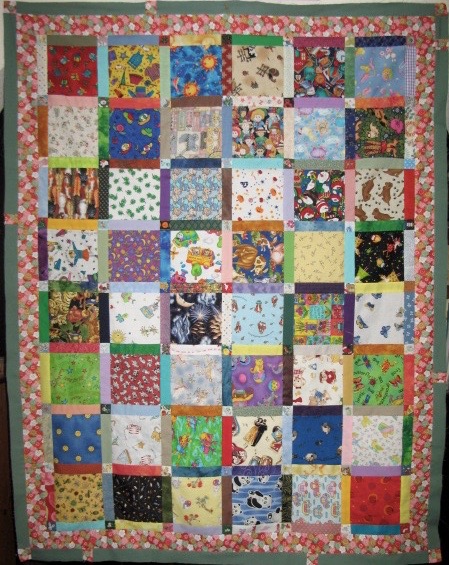 I alternated dark and light prints and turned them in all directions so there will not be a top or bottom.
I needed to add two more inches to the quilt so as not to waste the backing. The only green I had that matched the flowers on the print was short ... actually a left-over from one of my first quilts. I just added floral cornerstones between the strips so they are rather random in placement.

Now, to get this laid out and basted ... Maybe I should go early to choir and use the floor at church.
I am already in trouble at school because a "needle" or maybe a pin... was found on the library floor. I was asked by the art teacher to prepare some materials for a class that involved sewing thin gauzy fabric into larger pieces and asked to take it to the library when the kids were using the art room....
however, the pins I used were safety pins.  I think the needle came from one of those airline kits and there may have been pins in that pack but I never took them out. Nevertheless, I was seen sewing in the library and the art teacher verified that I used the library to sew something. Anyway, we shall see what happens on Monday. My pins have big colorful heads that are easy to spot when dropped. Maybe I should take them along to compare.

The weekend is drawing near and there is an awful lot on my plate before Monday comes around.
Posted by Julie Fukuda at 9:04 PM 11 comments:

What are shoe boxes for?

Sometimes you find the perfect place for sorting your scraps. It may be a tin or a buckle-box of even one once intended for shoes.

When my quilting ends up with small scraps, rather than putting them back in boxes by color, I cut them into the largest square size they will fit. I used to make only squares but with a good box of one-inch squares, I began to cut one-inch strips into 1 x 2, 3, 4, 5, or even six inch lengths. Those go into baggies and live in the shoe box. 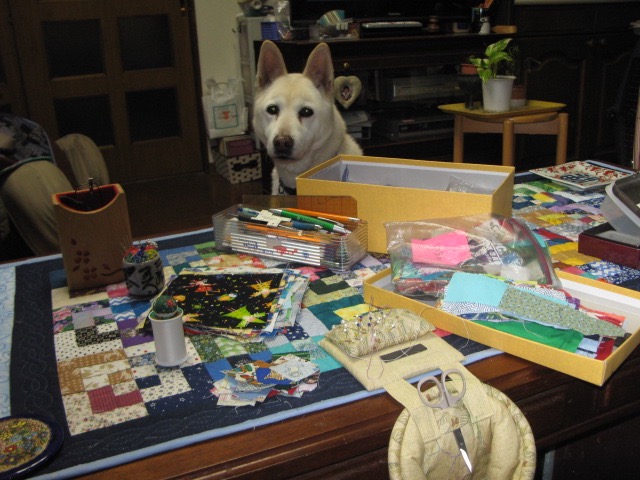 Last night I took my baby quilt idea to choir and ran it by the head honchos. The proposal was approved and it will not be too hard to do as most of the pieces are living in a box or tin. 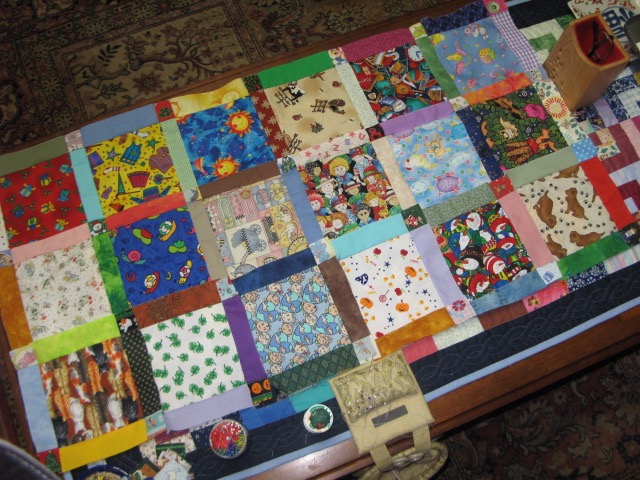 I have more than enough kid-friendly prints and am arranging them in an alternate dark-light pattern.

I am turning them left and right and up and down so that there will be no "right" way to use the quilt.

The 1 x 5 inch strips are going between like a kind of sashing and those one-inch with kid-friendly prints fit where the sashing joins the next block.

Since this will be from the choir, they wanted a place to sign their wishes and names. I have just enough of the hand-print fabric I used in a baby quilt a little over a year ago for my fellow teachers to sign.

If I add two inch border, the quilt will be about 41 x 47 or longer if I have time to add more rows.
There is enough variety in some of these fabrics to make an I-Spy quilt.

What do you think is a good size to end up with? The quilt I made for my first grandson was 51"x 63" and that was too small to use on his bed when he moved to a bunk... thus a few years ago I began the tradition of a big-boy quilt. Other grandkids got bigger quilts but since they are rather babyish in design, they are gradually being replaced with something more mature in design.

I did make a big I-Spy quilt for the family that seems to be used for guests or on the sofa so I guess one can always play I-Spy even as grown-ups. I never know how or if a quilt will be used. The quilts my mother made for my kids got a lot of use except the first one that was crib-sized.
Well, I have plenty of time putting the blocks together before I have to gather opinions and decide on the border.
Posted by Julie Fukuda at 11:37 PM 11 comments: 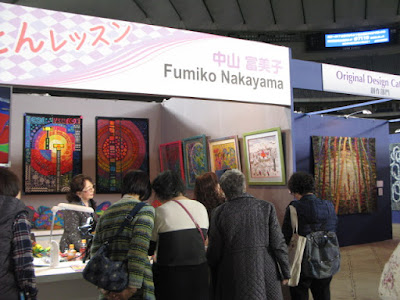 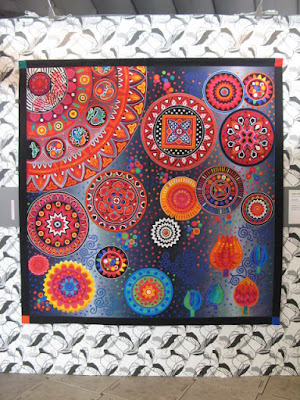 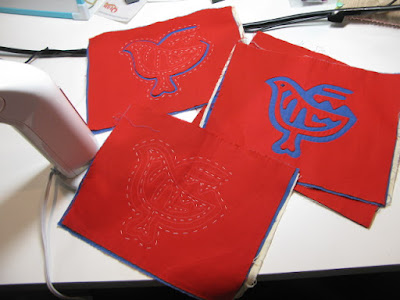 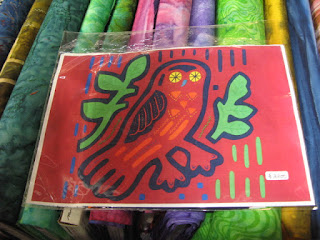 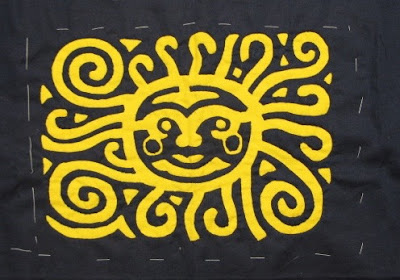 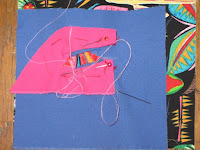 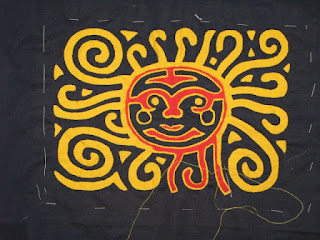