In a little over a week, Japan will celebrate "Respect for the Aged Day". Well into my 80s, I have been contemplating the challenges of growing old in Japan.

My first challenge came at age 70. From then, and every three years after, I have been required to take a "Senior Driving Test". The first time was not too bad, rather a waste of time being lectured by a young man and driving a pretend roadway more like an amusement park.

Over the years since, the test has become more and more demeaning, as if every elderly driver is in the last stages of dementia.

Trying to book the test, I was told there were no openings until the next year. My daughter tried to book it for me with no luck. It was my Son in law who finally got me a date ... not at the local school within walking distance, but far from home and hard to locate. Of course the test itself was no problem, but even with a score of 100%, I was told I had to go home and make a phone call to book the second half of the test. That segment was booked in a different location, but the test was easy ... if one doesn't mind driving the course in an unfamiliar vehicle. I said to the teacher,"It seems to me that you are making this test so hard to get, as to  discourage older drivers from taking it", to which he responded :You're right".

Yes, senior drivers may have accidents, but my car has been hit three times by young drivers. Once I was parked and unloading my van, and a young driver ran into the back while searching on the floor of his car for his dropped cell phone. Twice my car was hit while stopped for a red light by men on cell phones. One guy got out of his car with the phone still to his ear, checked the damage to his own car, and when the light changed, took off like a shot. Since I drive a van, I can see down into other cars when stopped at lights. The number of young people texting with phones held below the window is absolutely scary.

Another challenge of getting old ... when my 16 year old dog died in December, I began trying to find another dog. Walking the dog at least three times a day, keeps the elderly active and healthy. It also builds community with other dog owners. How sad it was to discover that being over 65, I am restricted from getting a dog. Even seeing a 10 year old dog advertised as looking for a new home, I was turned away as being too old. I am not sure how this makes sense.

What else might we find to challenge old people? Tuesday, I happened to be out to a dental appointment, and since there was a branch of my bank near the station, rather than walk a long way in my area, I decided to stop there to withdraw a rather large amount of money to pay for the dental implant that is not covered by national health. Imagine my surprise when the machine rejected my request. Going to the teller's window, I was told that because I am over 80, I can only take out a 100,000 limit per day. What that meant was I would have to walk over an hour each day for four more days in the heat of summer before I could pay my bill. Is this a rule to save the elderly? Or kill them off in the heat, to keep them from earning 0.01 yen interest? Who makes these rules?

Japan has a large aging population. Those elders who used to be respected are now looked down on as a "problem". Is history forgotten? This is the generation who rebuilt Japan after the war. Everyone who uses a credit card should be grateful to my husband who fought the big banks for universal acceptance, now taken for granted.

Surely I am grateful to be able to buy a "Silver Pass" that allows me to ride the Toei lines and city busses for free. And then, there are those things called "Silver Seats", supposedly for the elderly and handicapped, but in truth, only for the youngest and most aggressive. Surely those young people on their cell phones or sleeping with earbuds have found a way not to see those elderly ... and we all know, if we don't see it, it doesn't exist. Of course I won't see it either because that tall guy standing in front of me with a backpack knocked my glasses to the floor. And to add to the challenge, what used to be 8 seats in each end of the train is being readjusted to three seats at one end and six at the other. 5 fewer chances to sit.

"Respect".I looked it up in my 85 year old Children's Dictionary.... "To look up to" , "To esteem"... Are those young people sitting so they can look up at the elderly standing? I am wondering if those driving school people or pet rescue people, or the bankers, or even the commuters have ever thought that one day they, too, could be "elderly". As for me, I am rather tired of being judged entirely by my date of birth.

In the USA, there is the AARP, American Association for Retired People, The AARP advocates for senior citizens making sure they get a fair deal. Perhaps it is time for seniors in Japan to organize and advocate for our rights. 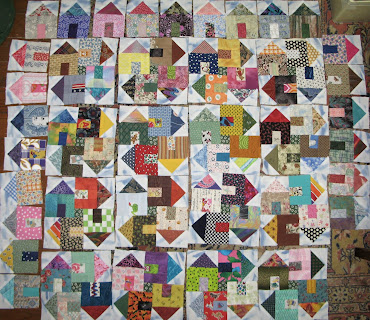 Meanwhile, my Coronaville is growing. What I thought would make a table runner now seems more likely to end up as a quilt. I am considering sashing between the blocks. I was thinking of alternating light and dark on each block but I do not want to spend money on any more fabric. I think I will wait until the blocks are together and then do the math to figure out what will work, I can adjust to outer row by putting some tree print  between them in a few places. Well, no rush. I have at least a hundred waiting to be arranged in blocks.

My homeless friends will be happy to get onigiri tomorrow after a long summer break. At least I am not too old to serve the homeless in the wee hours before dawn.