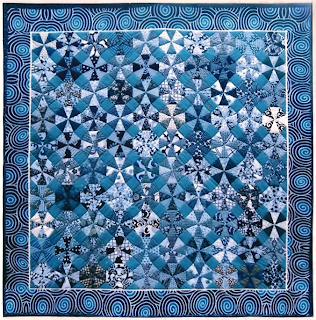 Made of a very wide selection of Japanese blue fabrics. Completed March 2, 2010 (Tuesday) in time to display at the ELC a few days before the Gala. 100 Dark and light blocks were marked and cut by a large number of volunteers. A sewing session was held at the ASIJ Winterfest when about30 to 40 of the blocks were pinned on a large paper.

By February there were a few panic moments, but Kendra was able to add the border to the assembled blocks. I took the project home between sessions and did the quilting on the blocks as it was a bit difficult to quilt into fabric layers at the points.

The last few sessions we quilted the white design in the border. Again it went home with me where I took out some of the poorer work and finished off the left over areas. Kendra added the binding and the last session on March 2nd, turned the binding and added the sleeve for hanging.

We finished at the ELC by the end of the day on Tuesday and it hung there until the Gala on Saturday.
size is 92"x 92"
Posted by Julie Fukuda at 9:44 PM 3 comments: