It's been a while

Over a month has passed, and I am finally getting down to the business at hand. I had laid the kotatsu cover facedown on the floor with little space to move around. I had thought of taking it to the church for basting, but that would have meant hauling the quilt top and the roll of batting and the queensized flannel sheet, plus the other basic sewing items on two trains plus a walk. I really need this space on the second floor apartment for laying out the anniversary banner, so I can get to sewing the rows together.

Yesterday I laid out the batting and today I whip-stitched the sections together. After laying the flannel sheet on top and pinning it in place, I flipped it over and pin-basted the top. Now it is back to my livingroom and today will go in the hoop. 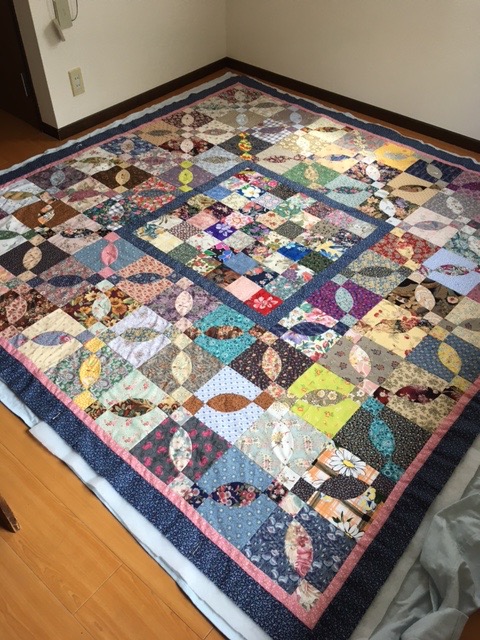 I used #80 thinsulate which, being made for clothing, is rather tacky and will not shift. Since this is being made to give warmth at a table, I am thinking light amount of stitching will make it puffier. Maybe in-the-ditch will be enough. I guess I will see once it is in the hoop. I'm thinking that lovely soft pale blue flannel might make a nice turned border instead of binding.

I'm glad to see this small progress and know I will have something for my hands to do during zoom and skype meetings ... though sitting under this warm top in the heat of summer might have its challenges.

Last week was spent at Scout camp. As usual, I did the woodcarving and leatherworking merit badges. Since last year had been cancelled, lots of supplies had to be brought from home, and I am still sorting and getting those things put away.

The classes were long and attention span short. It was my first time to have girls in the class and I have to say they did much better work than the boys. I also did not have an adult assistant to sign off the talking points, and fitting in last-minute requirements was not the best experience. Off and on rain did not add much either, but my silkworms were happy with a constant supply of fresh mulberry leaves.

The final day, I was presented the "Clarence Griffin Award", a new to me Far East Council award for commitment and dedication. Interestingly, Clarence Griffin was the person who brought scouting to Japan, and started the Troop 1 international scouts in Yokohama. He welcomed Baden Powell to Japan, and for a number of years, I was part of the leadership of that troop, and have seen the charter signed by Baden Powell at that time. I didn't even know the Far East Council knew the story from much earlier days.

One of my cub scouts had a graduation ceremony and crossed into the troop with the "Arrow of Light" rank the Friday before camp started. I was pleased thar a week later, at the end of camp ceremony, he was presented with "Honor Scout" award. I guess effort pays off in more than one way.

Off to start quilting....