When life gives you scraps...

The flimsy got its last border two weeks ago and I could take a picture in the park on Sunday. At first I thought maybe that dark paisley border was a bit heavy and maybe needed to be trimmed a bit narrower, but I had selected five inches because it will be good for the celtic heart stencil I made for the last baby quilt. 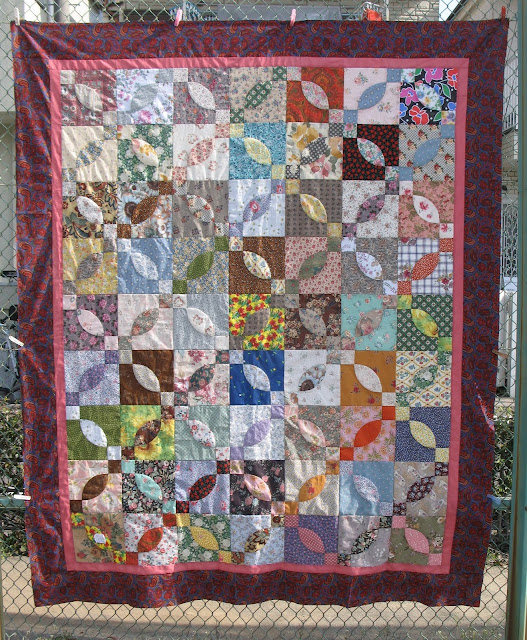 I wanted to back the quilt with a non-directional busy floral print but I just didn't have enough of anything and the idea of hand-piecing something with all that measuring and then having a bunch of seams on the back side was discouraging. Instead I found a large length of plain white fabric and after cutting it one seam was enough.

I had planned to take the quilt to church for basting but could clear enough space on the floor of the empty apartment, and though I had to crawl around on top, it worked perfectly for pin-basting. Not having enough of the #60 or #80 weight thinsulate, I put on two layers of #40. The white backing is a bit hard to quilt through so my stitches are only five or six to the inch.

I am quilting this all in the ditch and then I will decide about the large spaces. I quilted others with big-stitch but with this backing, I'm not sure how the reverse side will look.

I had planned to give this to the women's society to sell or raffle at their flea market, but that has been called off. Now I am not sure where it will go but I plan to pass it on to the church as my tithe to raise money for the homeless mission or the library renovation.

Church now on livestream only. School closed. Scouts not allowed to meet . choir not meeting and cut to 4 members from this week. Neighbor's house undergoing renovation ... banging and clanging of setting up scaffolding last Friday, then the roaring of a motor all day Saturday and the smell of some chemical that gave me a headache. Being super-sensitive to noise and smells, I had to get away from the house, so went to the park to pull weeds ... three big bags full for Wednesday's collection and three more out today. Once the mosquitoes come out in full I won't be able to spend that much time in the park. I am wondering how much longer the work will go on.

Since the work is in the house to the south, (18 inches between my window and their wall) the scaffolding blocks off all my sun on the third floor. I had been working up there to save electricity on heat and light. A tall apartment on the east side and a three-story building a few yards to the west means very little sun coming in. Wearing a down jacket and sweater inside, I was surprised when I stepped outside today to see how much warmer it was than my livingroom.

Weeks ago, thinking of what I would give up for Lent, little  did I realize the choice that would be made for me. Many thanks to my blogging friends for a taste of normalcy.
Posted by Julie Fukuda at 2:16 AM