Busier than a one-armed paper hanger. 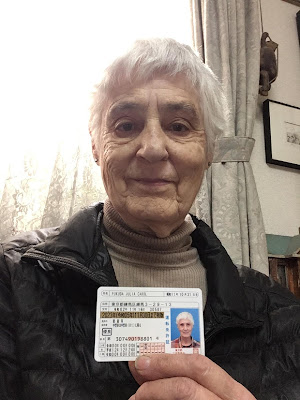 Monday was my second date with the driver's license bureau. Of course, that is the day I leave home at 4:00 am for onigiri delivery

I had been scheduled to  take the second part of the test starting at 11:30 am, but a few days before, the bureau called my daughter to tell her the time had been moved up to 11:00.

That figures ... let's make those old people taking the test ride two hours, part way on crammed commuter trains. Of course, not wanting to be late, I allowed about 20 minutes extra for getting lost... meaning I got to stand in the crammed sardine can and wait in long lines at station changes.

I arrived at quarter to eleven and was told I was late, that they had called and moved the time up to 10:45. Well, I never got that call, Maybe they called my daughter who was out of town.

Rushed to the classroom on the 4th floor... forms to fill out ... money to pass out ... and LOTS of waiting time.

Actually, the whole day was spent waiting in lines. Assorted eye tests... at one there was a long standing line of hundreds of people all spaced out so as to make rows and rows of people waiting to go in a small booth for an eye test that was about the same as one already taken. Then another line to take the driving test along a course. I swear, if they had offered to give me that car for free, I would have said, "No way!" The gear shift lever was between the seats and each movement was several steps. The car seat was way too low and couldn't be adjusted. Anyway, I passed that part, went back for the lecture... all in Japanese, and was handed a booklet of rules, also all in Japanese. Then more and more waiting Finally standing in line to get my picture taken and then sent to another line on a different floor to wait for my number to be called. Only about 90 people in front but they seemed to call only 20 people at a time with long breaks in between. Then, pay more money and wait to be handed my card. Finally finished at 3:55 and went out to stand in the line for the 40 minute ride back to the train station. It was about 5:59 when I got home, not even having had a lunch break. Luckily I had slipped a smoothie into my bag, so had a bit to sip from time to time.

Thankfully, that is over for the next three years. Hopefully in that time, someone might figure out that there are better ways to test senior citizens skills than putting them through two days of torture. 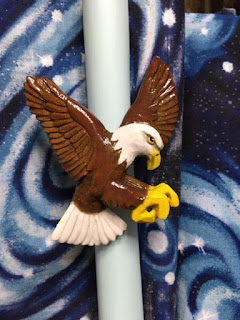 Next on my list was an invitation to an Eagle Court of Honor for a scout.
When this boy was a cub scout, I gave the boys what I called "The Cubmaster's Challenge". I promised to carve a neckerchief slide for and cub graduating to Boy Scouts having earned the "Arrow of Light" and completed everything in the book including the religious award and the conservation award. When the boys met the challenge, they got a slide of a hand in the scout sign and a promise that if they made it all the way to Eagle, I would carve them an eagle slide.
I didn't get the invitation until around Sunday and there was not much time to whip out a carving. I don't like to do a rush job and possibly get cut or make a mistake and have to start over.
Tuesday I spent whittling the bird, and today did the painting and varnish. Now it is ready to go with a note rolled up ant put through the ring.
As the scouting community here in Tokyo is a revolving door, with families here for just three or four years, I am lucky this scout will not have to wait to have his slide shipped to the next country of residence. I think there have been years that I sent five eagles off to far away lands. He will get it presented on Friday.
My Coronaville table runner is almost finished with only the border to quilt. Last week I went into town to buy two rolls of thinsulate but I still need to prepare the backing and get the bed quilt basted.

Last month I began trying to trick my poinsettia into blooming by Christmas. I have cut the amount of daylight it gets by moving it from a closet to a sunny space. So far, two small leaves have begun to come out red. Last year there were a few red leaves but the flowers were later in January. We shall see... 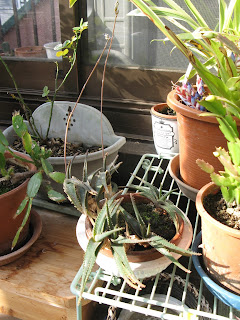 This spiky plant in the foreground came from my friend, Wally's house, along with a number of plants that were raised by his wife.

Can you see the flowers? 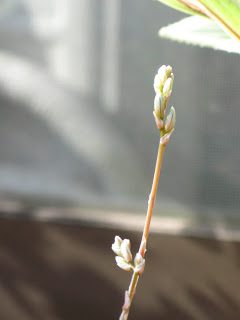 Here is a closer picture.
The wife was a fan of succulents from South Africa.
I have no idea what this is, but there are several pots of something similar. 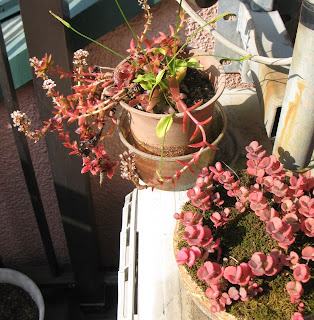 There seems to be more than one plant in this pot on the left.
The flowers are very tiny. 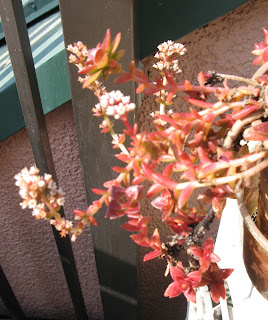 Those kind of star shaped red segments that look like leaves seem to be starters of new plants.

I have a few books about cacti, but those only seem to cover ones that are found in the Americas.

This one totally thrives on neglect. It has spent a year sitting on the AC unit on the balcony.

I have also moved a small potted rose up to the greenhouse as it had lost all its leaves after blooming in October, and was looking very sad. I talk to it each day and cheer it on and now it is looking very lovely. I don't know if I will get flowers, but at least it is saved.

So ... that is about all for now. I should probably prepare some hand work for take-along work... and maybe get to basting the bed quilt so I will have something to work on during my down time...

other than running outside several times a day to sweep up falling leaves... I should have planted ginkgos that drop their leaves all at once...