Scout week is for the birds

Years ago, I began quilting a dragon runner for the bureau in my entry way. Then we moved and the bureau went into storage. The new place has a large coffee table and the "Dragon year" was coming so I thought it might be a good time to finish this runner. Do you think I could find it? It is a complete mystery how anything can hide in a place this small! I found a second panel which has now been re-homed but it took some time to find this creature lurking in a box where it had been shoved to make room for guests.

I had quilted with gold thread around the pattern and at last I began to quilt the waves in the background. I was travelling a long way by train today to meet up with Scouts for a bit of nature study. I should have been able to finish during the train ride ... however ... In the "Silver seats" which are reserved for handicapped, and aged passengers, all but two of the eight seats were taken up by young people (reading, texting, and sleeping). I sat and pulled out my work expecting an hour of progress. The very next stop, two elderly ladies got on. One sat beside me and none of the younger passengers moved. Finally I got up and gave my seat to the other lady. Well, they were probably within a year of my own age but I was in my Scout uniform so I thought I should be setting the example. Next stop, an old man with a cane entered. So much for the example. I am amazed how those young people can manage to sleep, (eyes shut so as not to see those standing), but still jump up and exit when their station arrives. 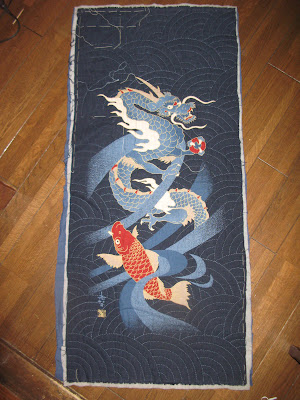 I took the long way home so the waves are almost done but they could have used that hour trip. I will have to add a border as my coffee table is a lot bigger than the bureau of the earlier plan. 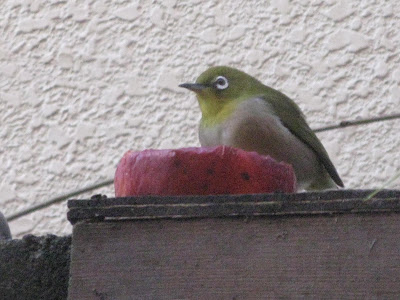 On the wall between my house and the neighbor, I have made a feeder by pounding nails up through a board. Two sides slide down over the wall and I can place apples or oranges on those nails each winter for the birds.

This Mejiro or Japanese White-eye seemed to be saying, "You are going so far to see birds? Whats the matter with right here?"

The group I met in Ueno was made up of Scouts and Cubs and parents from a combination of Tokyo units. We walked up through the park looking at trees, then back down to the pond to check out the birds. There are requirements for identifying "wild animals" in your area but unlike the states where you might see squirrels rabbits, coons, skunks, deer and all kinds of wildlife, in Tokyo, your best bet is birds and the best time is winter when the visiting flocks are in town.

The group was HUGE. I'm glad there are so many kids interested in developing their observation skills. There were at least 30 boys and parents and siblings and leaders doubled the size of the group. 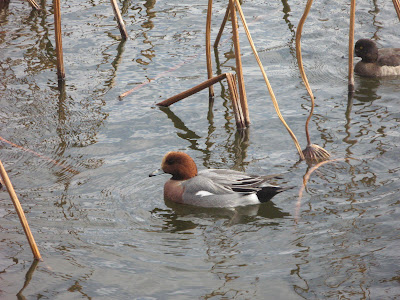 I gave each boy a printout of what we might expect to see and told them how to use the clues to identify the birds. We saw over 20 varieties. The city has not cut back the lotus plants so they were a bit harder to see among the plants. Still, ten was the goal so we did well.

Here is an Eurasian Wigeon. 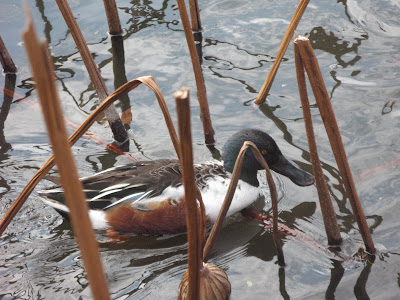 This was a very aggressive male Shoveler. He was chasing every other male out of the area. 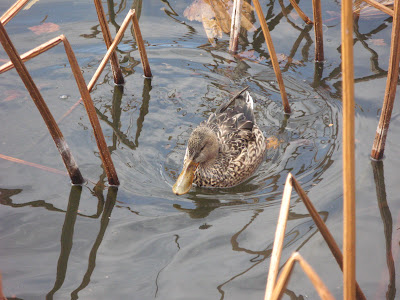 All the while the female scooped up bread crumbs tossed by visitors. 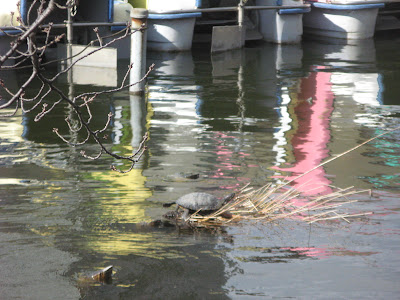 Surprise visit by a turtle. Checking out the sun. 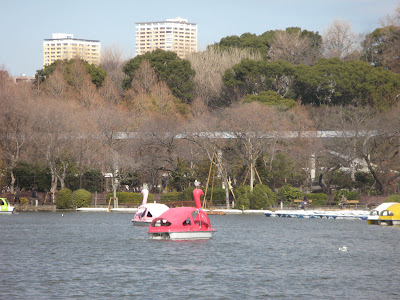 And this immature Black-headed Gull is fetching a ride on a swan boat. 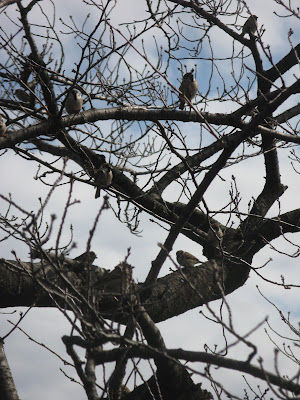 In the trees above the bird-watchers are the people-watchers. There were quite a few bird-watching groups in the area. Many had telescopes and let the kids have a peek. I have a camera with a very good telephoto lens but it is not digital. I have been toying with the idea of getting a digital that can use those lenses. Other than the price, the size and weight are enough to make me wonder if I would use it enough to make it worth buying. Today was a day I wished I had it.

Too bad I didn't get a picture of the real "wild life" ... all those boys! This was a fun way to end Scout week and a group I didn't mind speaking in front of.