I have always loved piecing triangles and began making these North wind blocks in the winter of 1997. Once I had plenty of blocks, I thought all that wind needed something to do, so I added sailing boats  ... and a mariner's compass, so they wouldn't get lost. 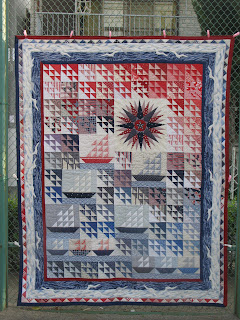 Once the center was together, the project stalled for want of a border and ended up as a UFO in a box with other unfinished projects.

A  1999 issue of  "Quiltmaker" magazine printed designs using the block and requested pictures using the block be sent in. I sent the picture of the unfinished top which was printed in the May/June issue and along with the printed issue came a suggestion to use a cloud print for the border.

Then in the summer of 2001, on a trip to the States, I bought some cloud and water print but I still couldn't decide how to use it as the print ran the short way across the fabric.

Finally, I declared 2003 to be "the year of the unfinished project" and vowed not to start any new project until all my UFOs were done. This was the last project of the year and finished in April 2004. I pieced the water and clouds and placed gulls across the seams. The outer border used up triangles I had originally thought of using for the border in a different way. 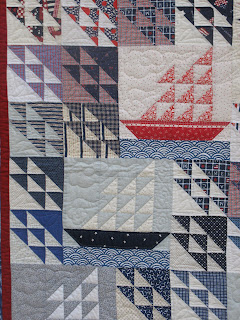 I quilted a Japanese cloud design in the boat blocks. Some gulls were white and some were gray and some were quilted along with more clouds.
I usually make scrappy quilts but this time I limited the colors to red, white, and blue, putting red and blue prints between the red and white and blue and white blocks.

Although this quilt took a long time to reach the finish point, I am happy with the final result and learned that sometimes a bit of waiting for the right idea to come along may work better than rushing ahead.
Posted by Julie Fukuda at 3:47 PM