A few more additions, and this will be ready for quilting. Once all the cats have faces embroidered on, there is an opportunity to add a bit more color ... or to balance out the colors you have already used by adding balls or other objects. The balls added here are about an inch and a half across. They can be made rounder by cutting a round of batting the same size and making a sandwich when appliqueing them on. Since this is a table runner, I have left them flat.

Since the side margins of the cats move by the tails width, the background could be balanced by adding another ball or some other object in the wide spaces. On the larger quilt I moved the outside balls into a line and added a sideways cat at each end.  Here I am auditioning a butterfly.

Though the tweedy cat and the striped one do not seem to show up well next to each other in the photo, they do a bit better in real life. The hardest part of this cat pattern is selecting fabrics and placing the cats so each one shows up against its neighbor. Small prints that read as solids seem to work best. If I had made this quilt larger, I would have separated these two with a solid. 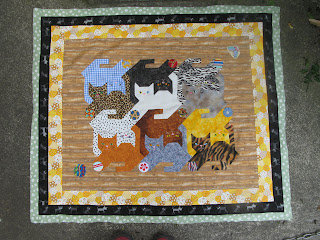 I have also added a night cat patrol around the border. Judging from the yowling we heard there must be at least this many. And, since I had gotten this fabric out too, I added a bit of the daisy field. 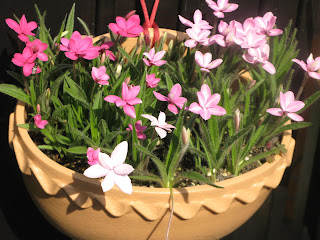 The hanging pot on our front gate has put on a show. It must have enjoyed the rain more than I did. 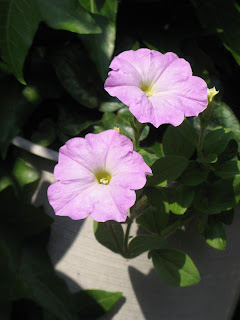 And one petunia in a pot hanging from the wall must have survived the winter and has begun to bloom. When I was a kid, my mother loved petunias but they had to have the finished flowers picked off each day in order to continue blooming. Since my mother could not get down that far, it became my task to tend the petunias and I never had a particular fondness for them. These days, there are new varieties that are perfect for hanging pots and never seem to need tending as they begin early and bloom all summer through.

When I get frustrated with new things (like blogspot "improvements") it is nice to see that a few improvements, especially when it comes to plants, are really for the better.