My love affair with Kasuri

I am not sure how many of my blogging friends are familiar with "Kasuri". I don't even know how much of it is being produced today. All my bits of that fabric have been picked up from shrine sales (the Japanese flea market) or used bins in stores carrying old stuff or picked apart work clothing.

The fabric is hand woven. The warp and weft threads are dyed before the loom is set up. The skeins of thread are tied off at intervals to resist the dye and left white ... but in some cases, dyed other colors.
The most common color is indigo and white but sometimes other colors are added.

The thread used is slightly heaver than ordinary cotton fabric and was commonly used for work clothing. I have bought several worn pairs of "mompei", long over-pants for working in the fields, and yesterday spent some time picking out the thread to return them to a usable fabric. 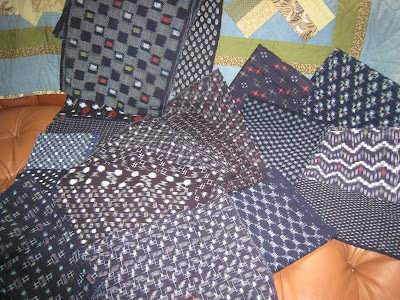 Here are some fine weaves that are a bit older. You can see that the color chosen is not always indigo but sometimes light blue, gray, or browns. 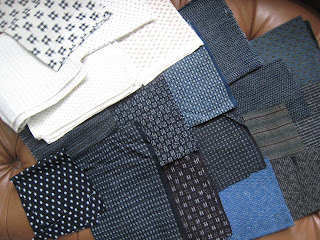 The whites are very old and hemp fabric rather than cotton. They were probably used in summer yukata or even night wear. 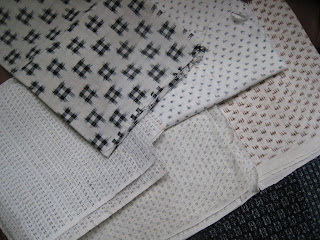 These whites are woven with brown or gray. 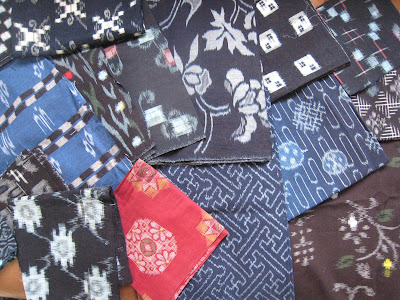 Sometimes the designs can get very intricate and amazing. It is hard for me to imagine measuring and dying a piece if thread so that when you put it to the loom, it would produce such an intricate design.

All that work for a strip of cloth about 13 inches wide which is then sewed into work clothes!

(well, probably not some of this fancier weave). 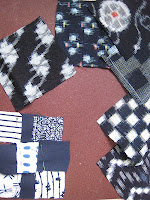 My #3 daughter has been wishing for a bigger bag for carrying her stuff and I thought this sturdy fabric would hold up pretty well and not show the dirt.

Yesterday I did a bit of un-picking and washed and ironed some of these kasuri pieces, cutting around the worn places into three inch blocks (and the scraps into one inch). 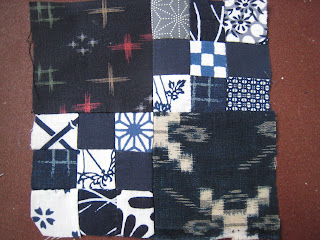 I thought I might sew them together alternating with nine-patches of other fabrics from yukata or tenugui.

I like the idea of nine-patch blocks for take-along work but I am not certain this is the best way to show off those kasuri fabrics. 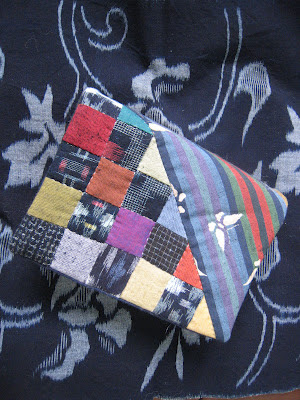 A few years ago, I was asked to make a prayer book cover for a speaker at the Women's Conference. Before setting off, I tried my hand at making a cover for my own Bible.

This poor book was presented to me in 1944 at my confirmation. Those were war years and though the binding has held up well, the fake leather (cardboard) cover has completely crumbled.

Although I used one-inch squares of kasuri, I alternated them with a similar fabric made much the same way. The warp threads are one color. (usually indigo or black) and the weft are colored. The weight of this fabric is quite the same, as is the width of the piece.

I picked out a piece with a butterfly which was a symbol used by the "hidden Christians", as it represented to them the resurrection.  I chose the kasuri because, at least to me, this fabric represents a great act of faith ... that after all the work of dying that thread and stringing the loom, that when woven, the design will come out as planned.

Now that I look at this old piece of work, I begin to think that those solid colored fabrics might show off the kasuri a bit better than those nine-patches.

Thanks for any feed-back.

Email ThisBlogThis!Share to TwitterShare to FacebookShare to Pinterest
Labels: Kasuri