My first post from this years show featured a section on children's book quilts. I don't know why Tokyo Dome and  NHK pick out books for each years theme but it certainly seems to popularize those stories. Last year we saw lots of Moomin quilts and even today we can find those illustrations printed on clothing for sale ... and I do not mean just children's clothing.

This year,the featured author was Laura Ingalls Wilder and her "Little House" series. Although many books have passed through our home, this is one series that remains, waiting for re-reading to grand kids 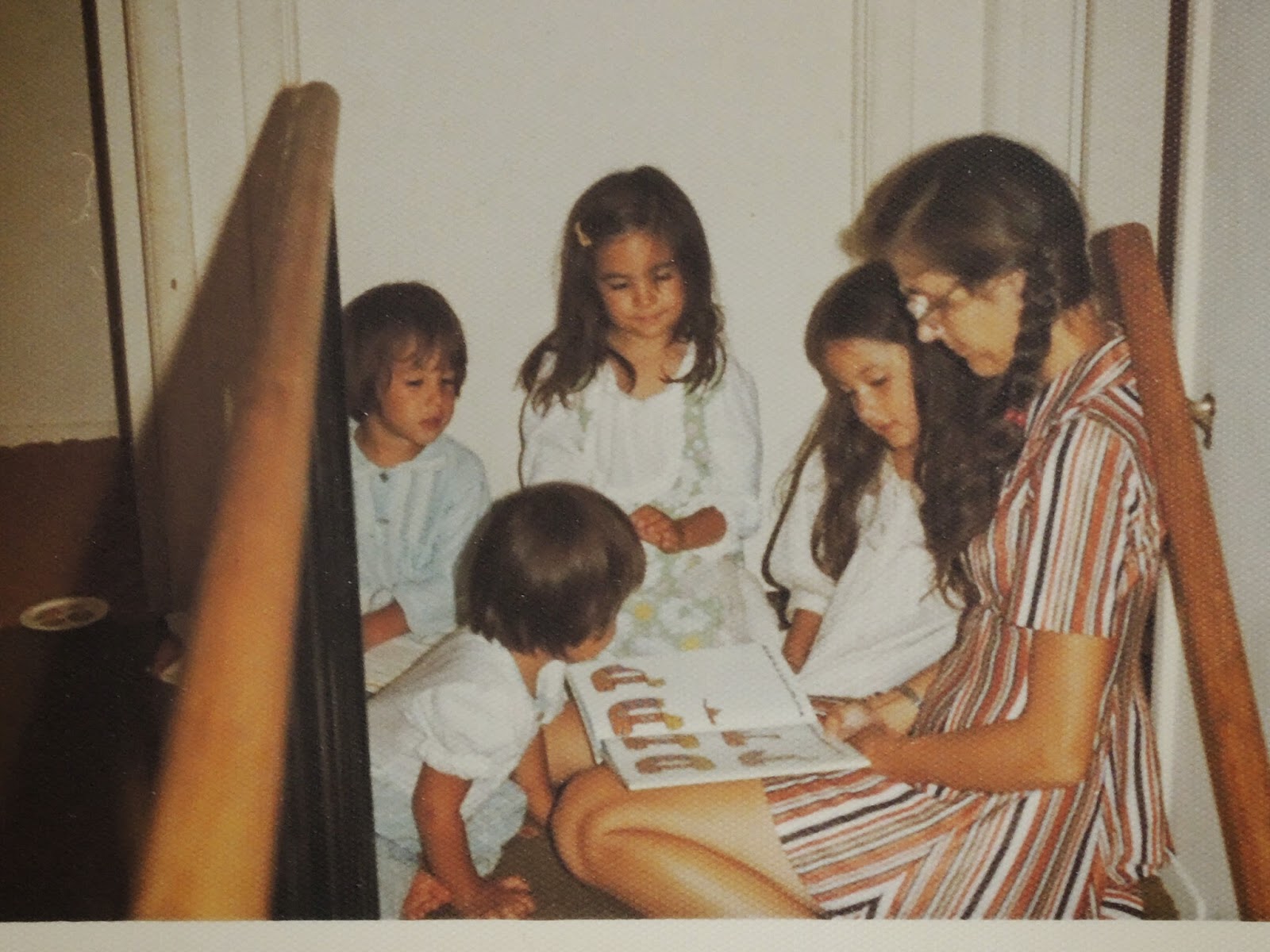 I have recently read an article about reading to your children with great interest.

When I began school, I was expected to read to myself. In those days, perhaps because of the war, we did not have books to hold in our hands, but one large book that sat on an easel at the front of the class.

I sat about in the center of the room ... in alphabetical order ,,, behind my twin brother. (who was far-sighted and wore glasses). I could barely make out the pictures by squinting and I had to "read" by memorizing the words that went with the pictures. I honestly thought I was reading. We had our eyes checked every year. All I had to do was wait in line, and when my time came, I put my toes on the white line and said the eye chart.

As the years went on, there were fewer pictures in books, requiring me to memorize longer passages. My parents scolded me for holding things so close to my nose saying I would ruin my eyes.I should have been enjoying the Wilder books by the end of fourth grade when finally it was discovered I couldn't see anything beyond my nose. At that point I was given some glasses by a doctor who believed giving me full correction would make me lazy.

Reading was a huge chore. I hated school for many reasons and escaped at any opportunity. It was when I was a senior in High school that I picked up a Nancy Drew mystery and read my first book for pleasure. Of course I went  back for another and another.

While attending grad school, I got a job as an assistant children's librarian. I loved sharing books and their stories with kids. And, when I had kids of my own we had story time every night. Every night after dinner was bath time followed by a bedtime story. We sat at the top of the stairs as in the picture above and you can be sure the entire Wilder series was gone through ... probably more than once.
My daughters were excellent readers, several before even entering school, but that didn't mean that story time should stop. We read well into the high school years. 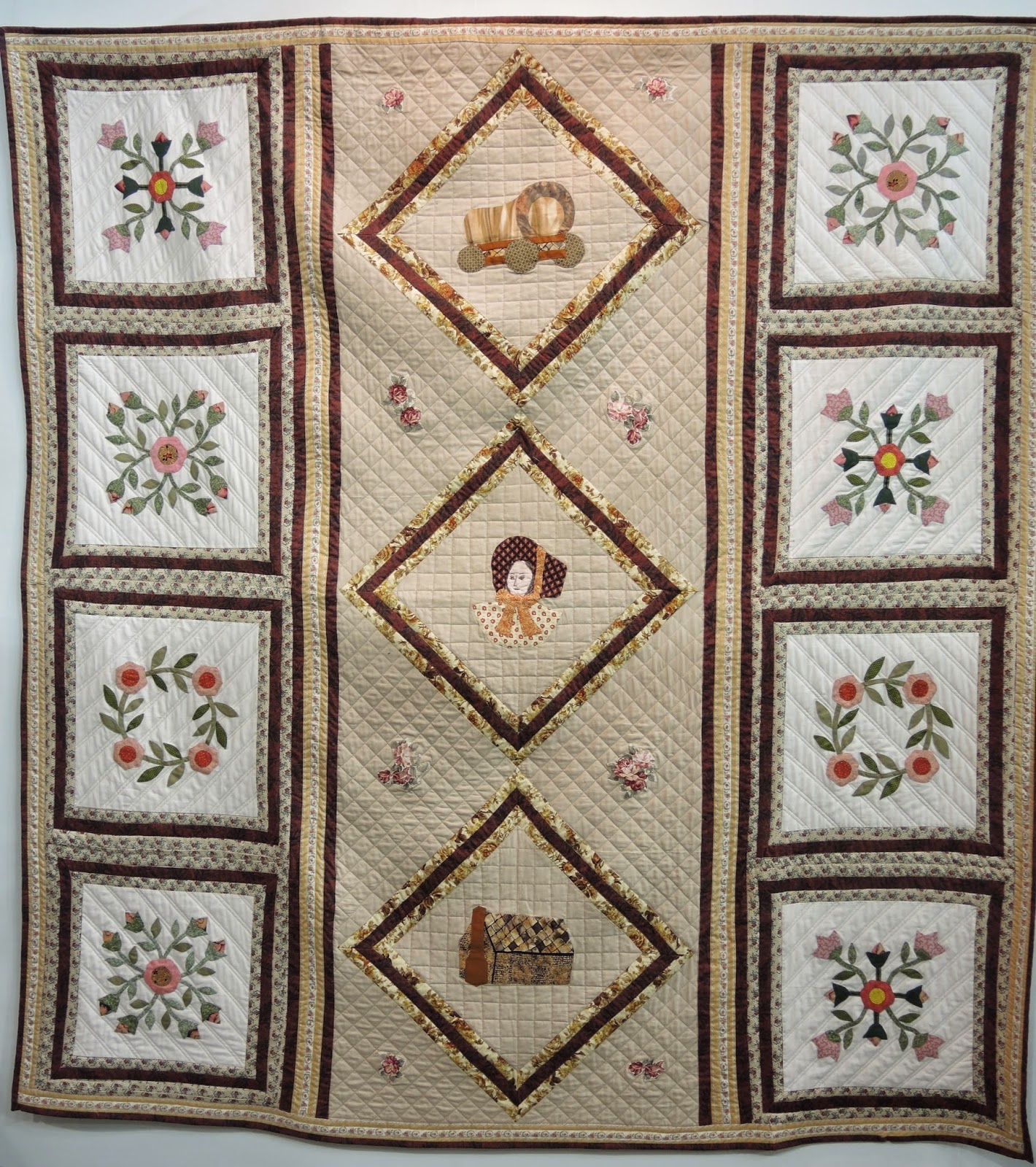 All these thoughts came flooding back as the quilt show neared.

My friend,Yasuko Kuraishi was making a quilt for the show while working her way through the Wilder books, which she was reading in English.

"I am a Pioneer Lady" is the title of her" quilt on display.


There were both quilts depicting pioneer life and some using what might be considered "vintage" patterns.

There was also a side exhibit of quilts from the Poos Collection, on pre-1860 quilts. 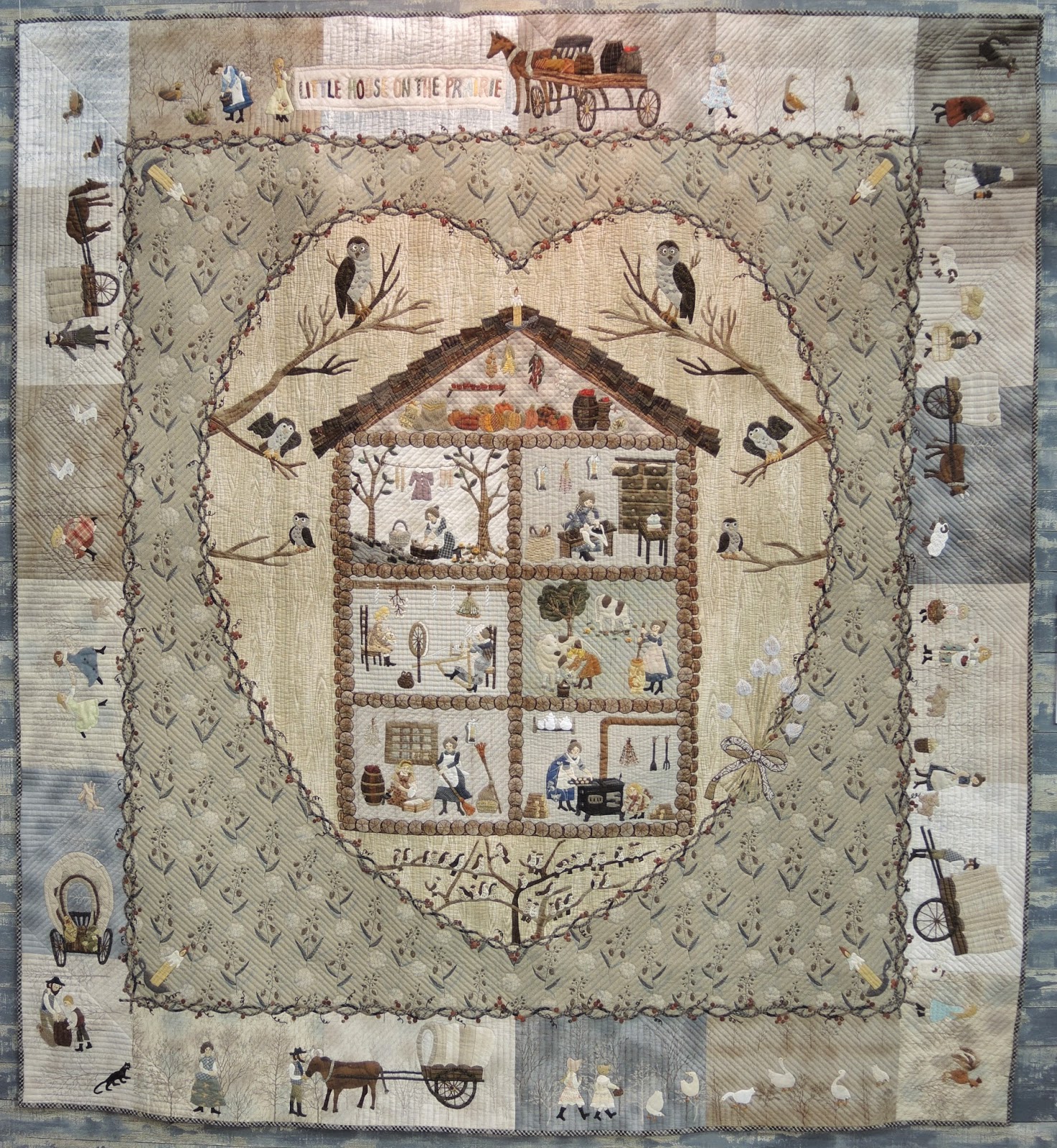 This quilt entitled "Day-to-day Work of Ma" is the creation of Osami Gonohe. 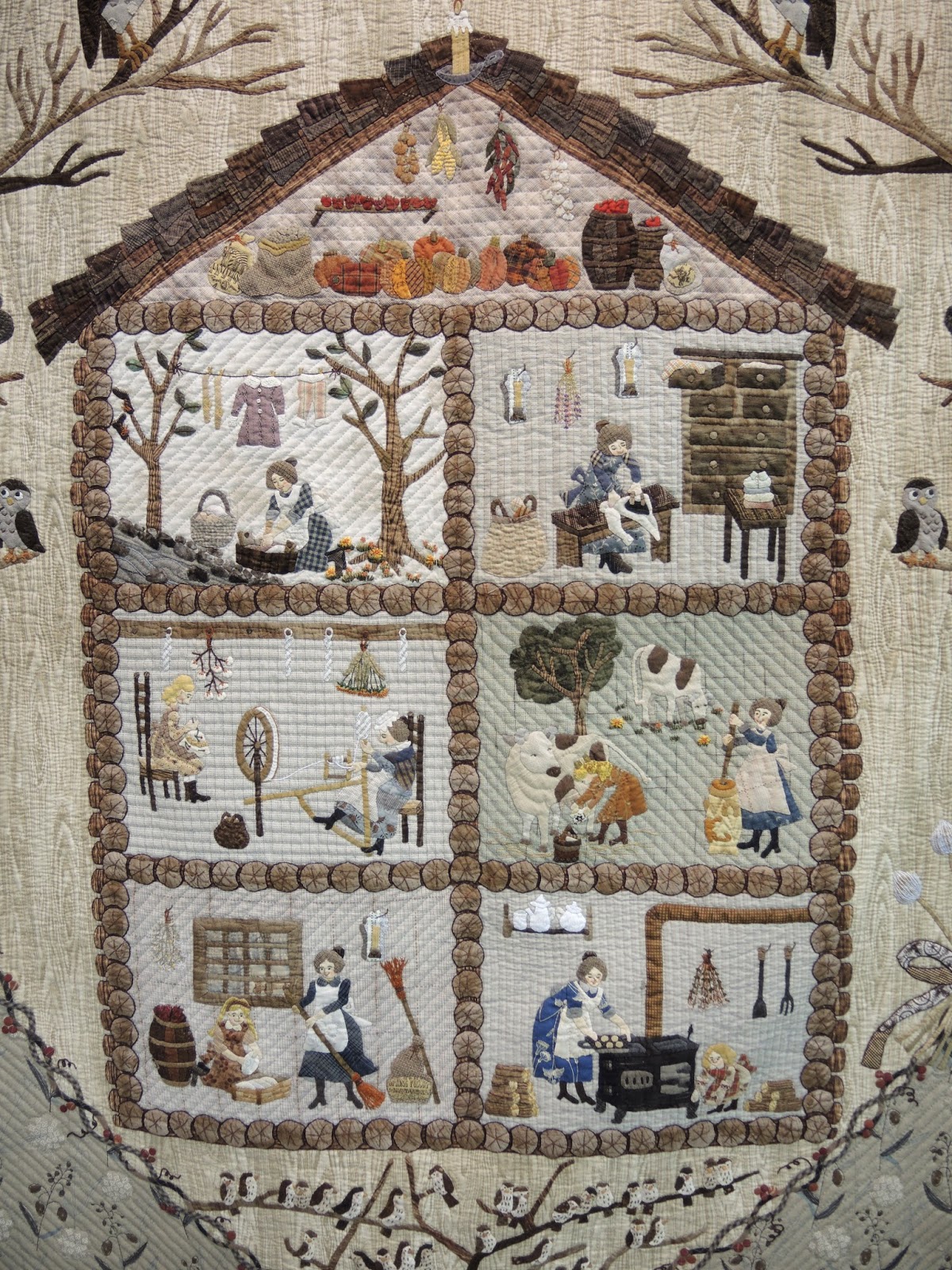 Just enjoy all that activity going on in this house!  (I also enjoyed those trees filled with Owls and other little birds). 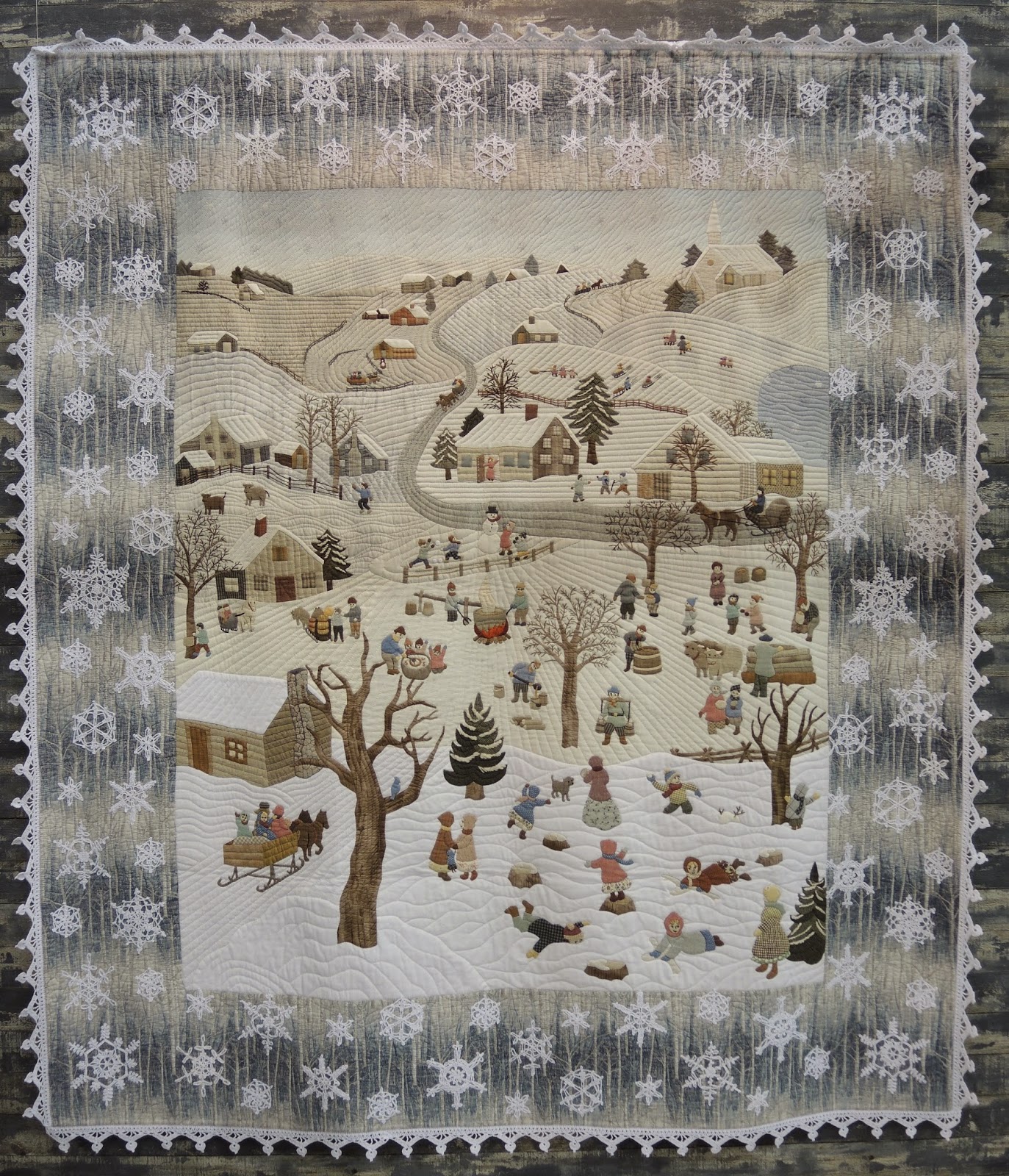 This quilt by Chieko Shiraishi is called "Winter Memories".All those snowflakes in the border are crocheted and appliqued in place. 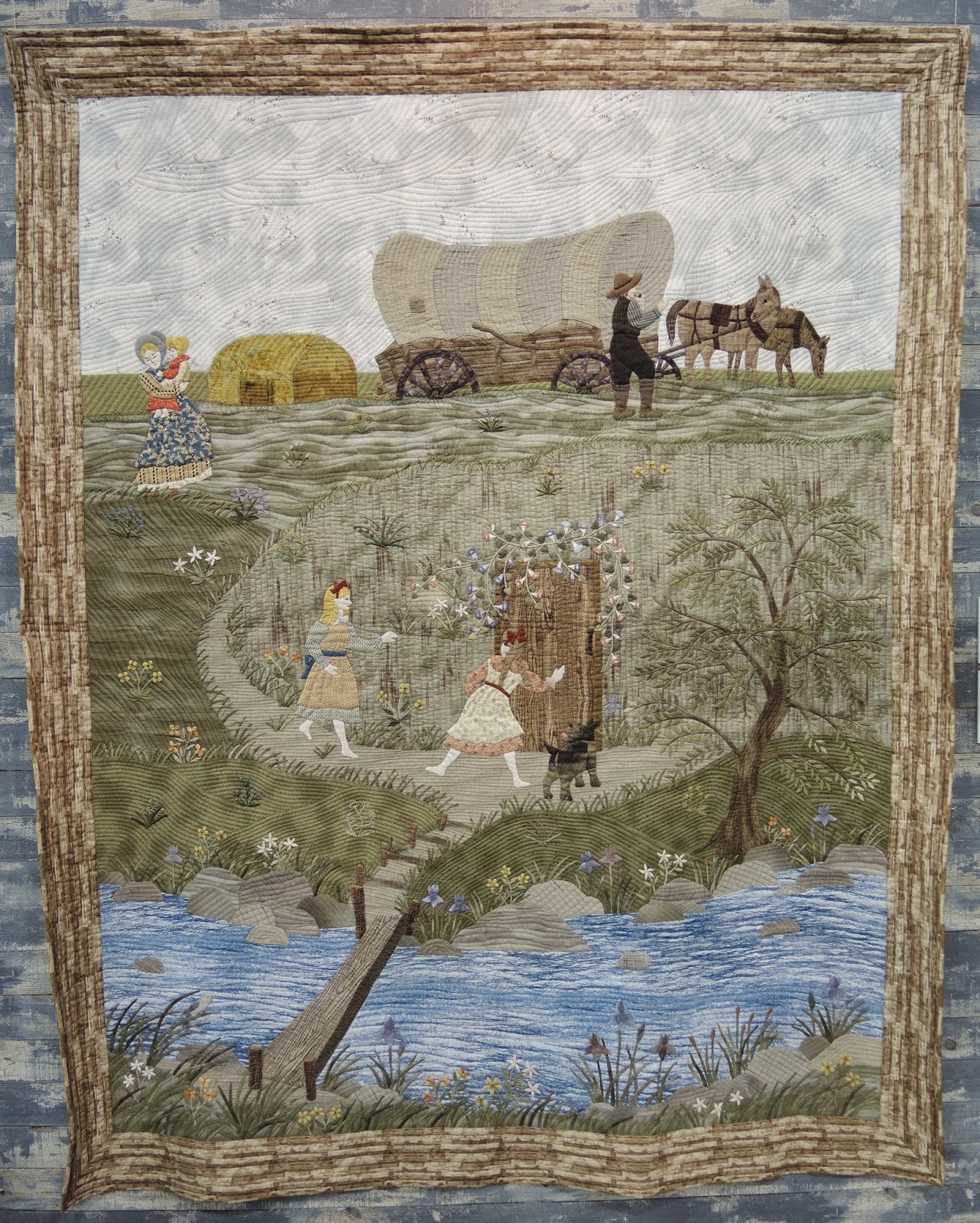 Here is another piece of the story, "A Door is on the Bank Side!?" created by Naoko
Hayashi. 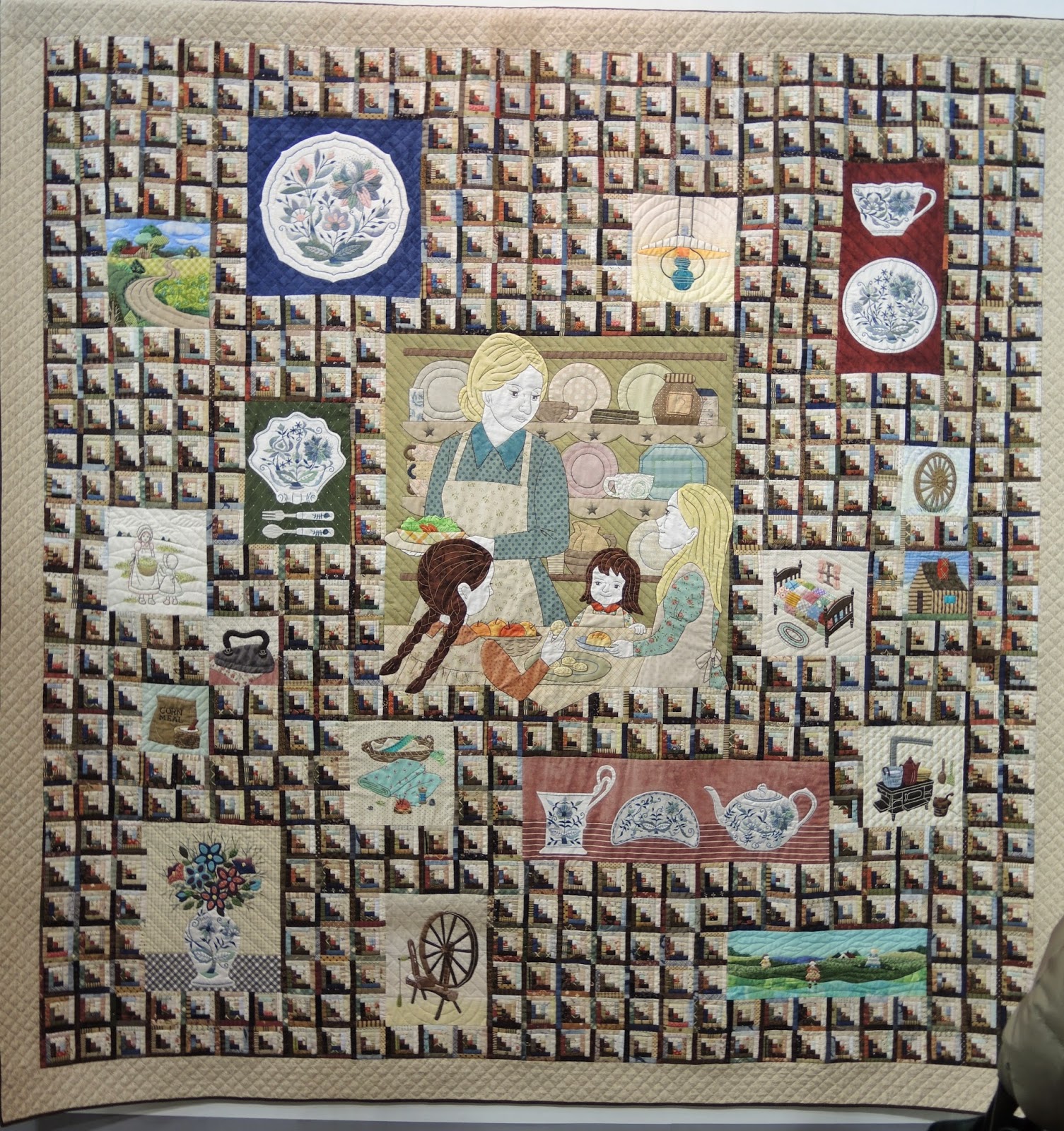 "Ma's Beloved Dish" is the work of Junko Yazawa. Each of those picture blocks is set with many small log cabin blocks. What an amazing amount of work all these quilters did to represent the theme of the show. 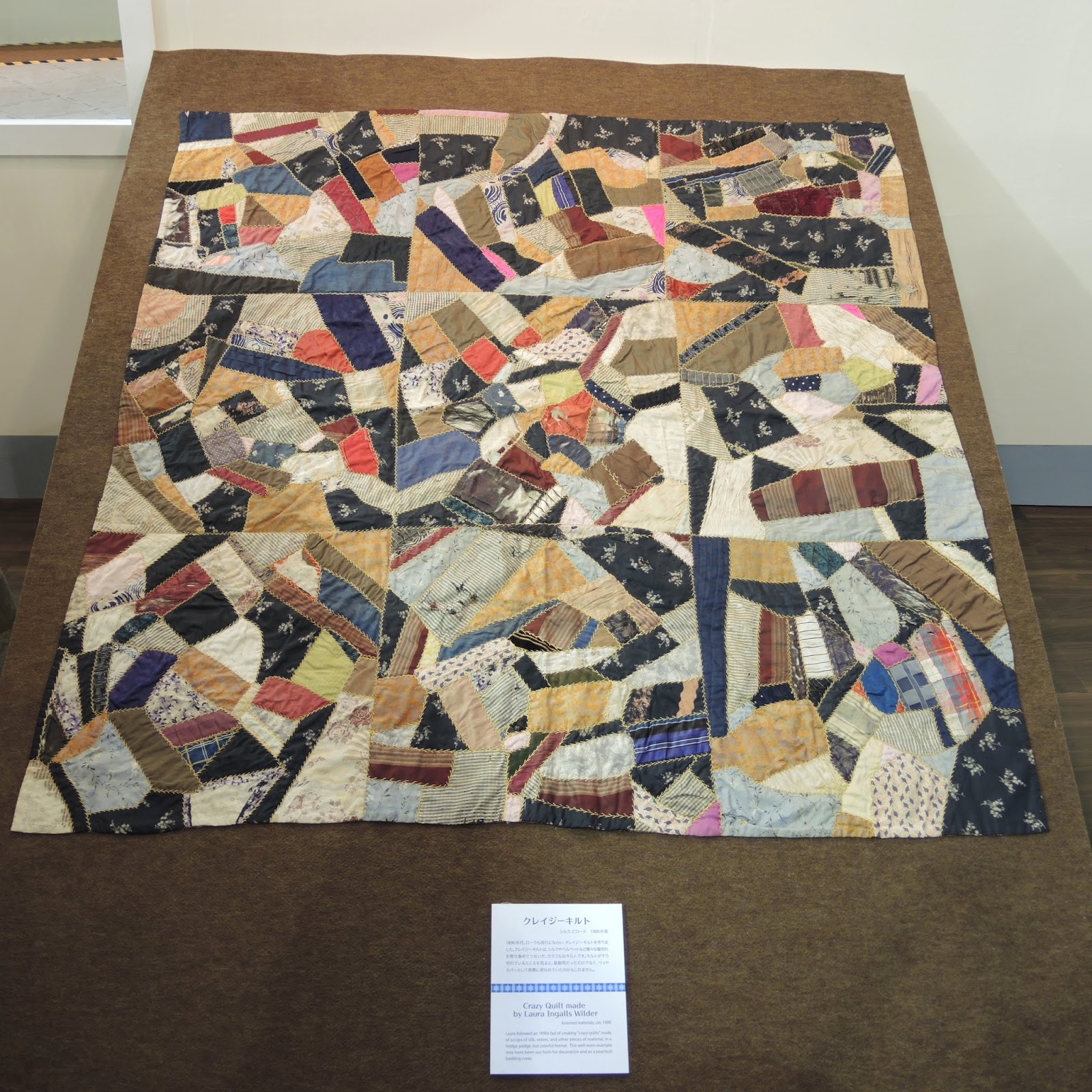 The tag below reads, "Crazy Quilt made by Laura Ingalls Wilder.  Assorted materials, cir.1900.
Laura followed an 1890's fad of creating "crazy quilts"made of scraps of silk, velvet, and other pieces of material, in a hodge-podge, but colorful format. This well-worn example may have been used both for decoration and as a practical bedding cover." 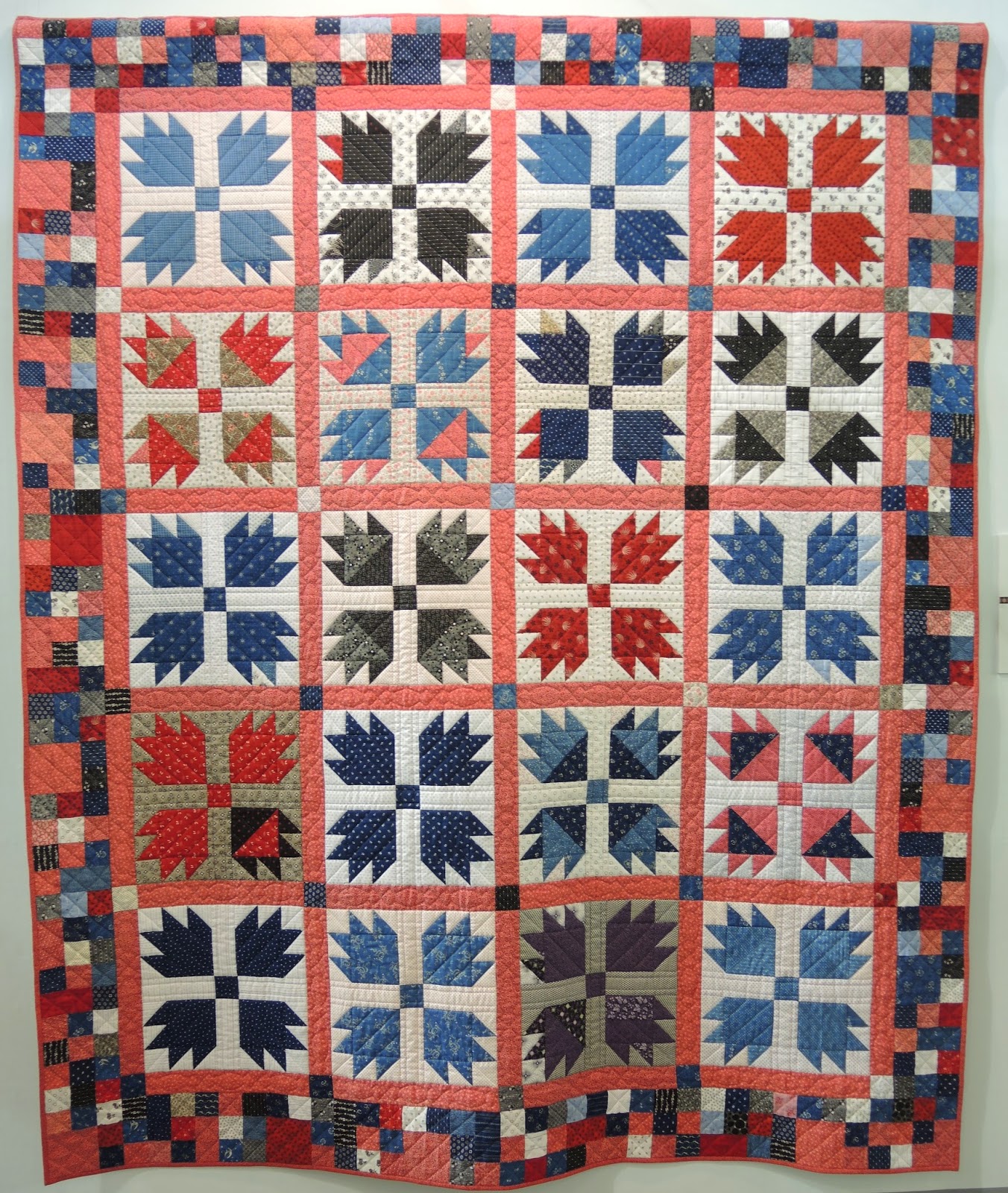 This lovely "Bears Paw" with a vintage feeling is the work of Atsuko Matsuyama.
The following quilts are from the Poos Collection. There were interesting explanations of each of the works.... a very educational side exhibit. And ... these were in both Japanese and English 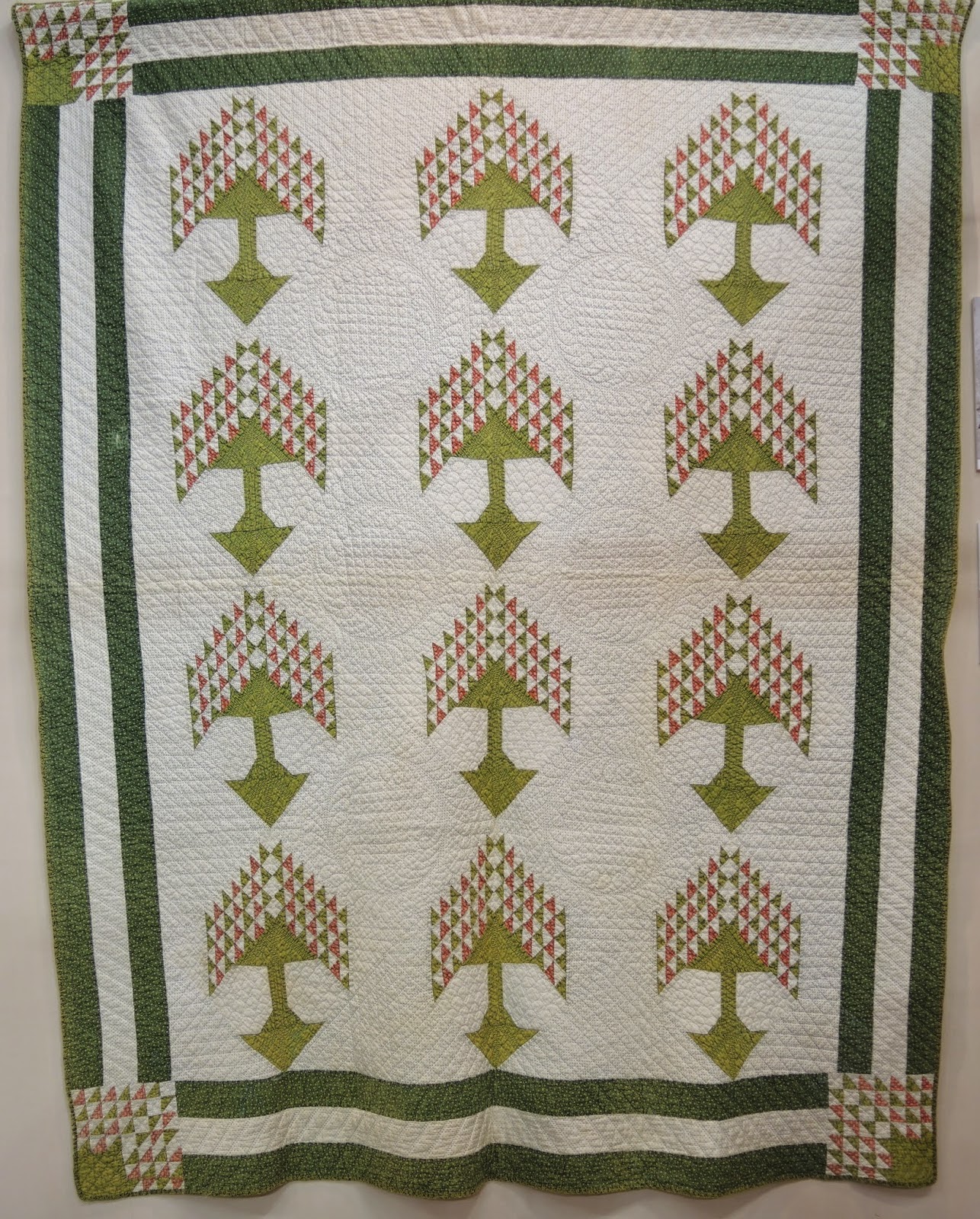 The pine tree is the state tree of Wisconsin, where the Ingalls first originated their journey. But on the planes, the pine tree has a special meaning.  It is one of the few trees that grow providing a wind block against the prairie winds and winter blizzards.  Much of the furniture and many of the houses when made of wood were constructed of pine and evergreen trees. As the German immigrants reached the plains, it was a pattern which was used frequently at Christmas time, when poorer families couldn't afford a real Christmas tree. 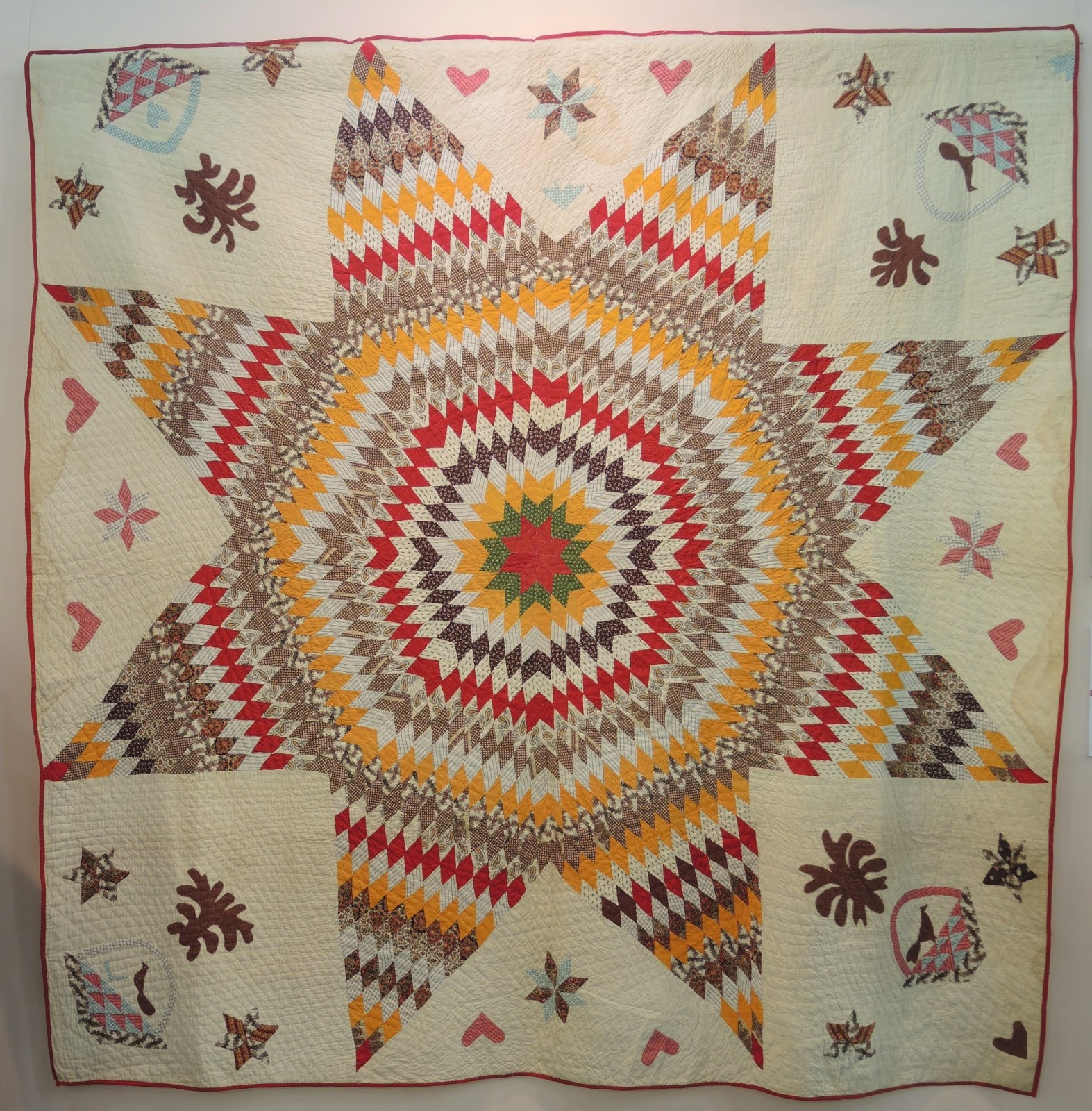 The star pattern and many variations were extremely popular on the plains. The original name hearkens back to their faith reminding the quilter of the birth of Jesus. The baby was born in Bethlehem where a bright star led the shepherds and wise men to bow down and worship. As the popularity of the star patterns grew, the variety of patterns and names developed including Lemon Star, Lone Star, and Morning Star which was derived from the Native American. 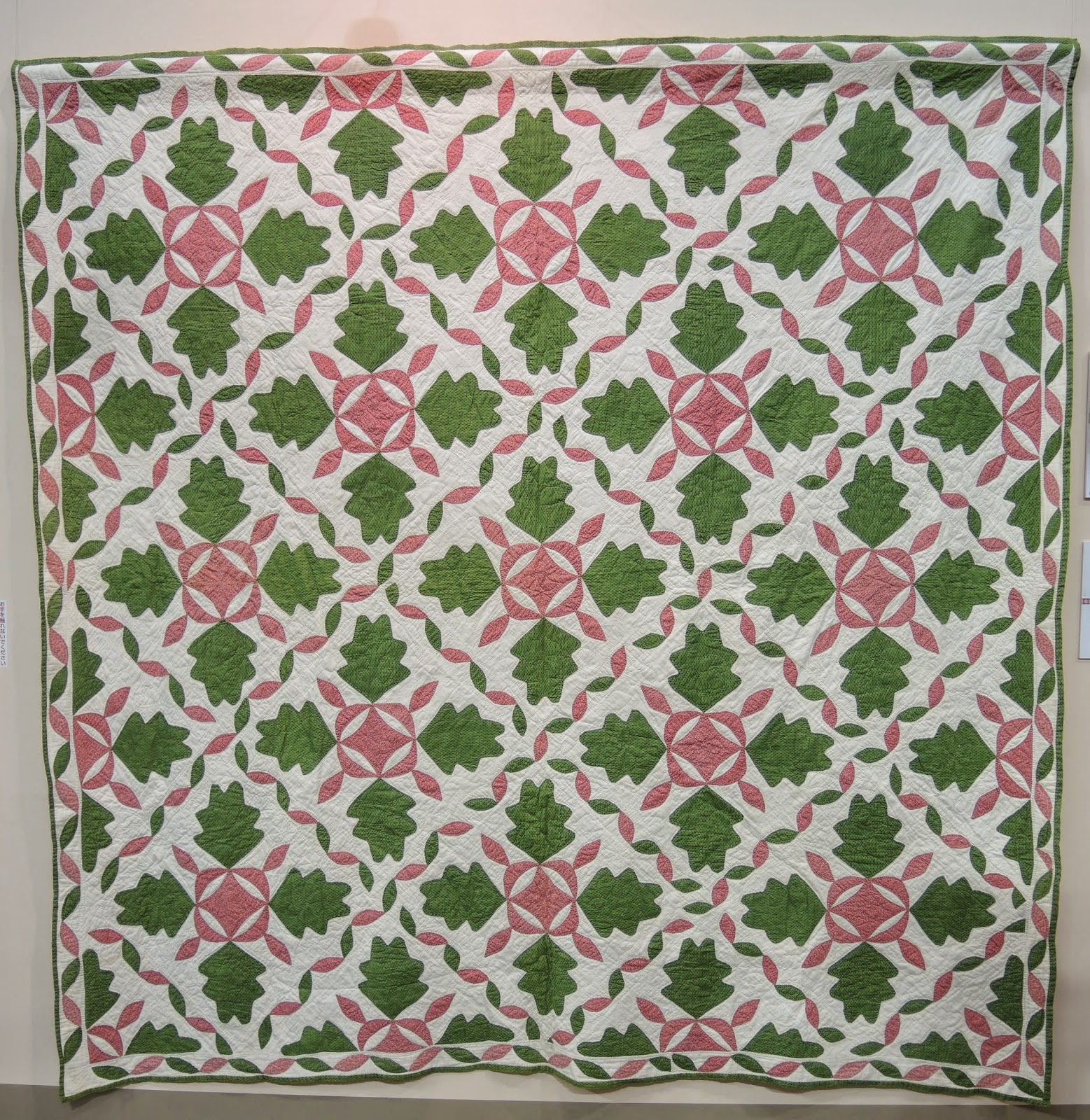 Because the wagon was usually so full of supplies for the families' new life, most of the pioneers actually walked beside their wagon. This quilt pattern was inspired by a woman walking alongside the wheel of the wagon that would carry their life to the new land. The Oak leaf was added as a reminder for them to be like the oak tree, strong and courageous through the long and difficult journey. 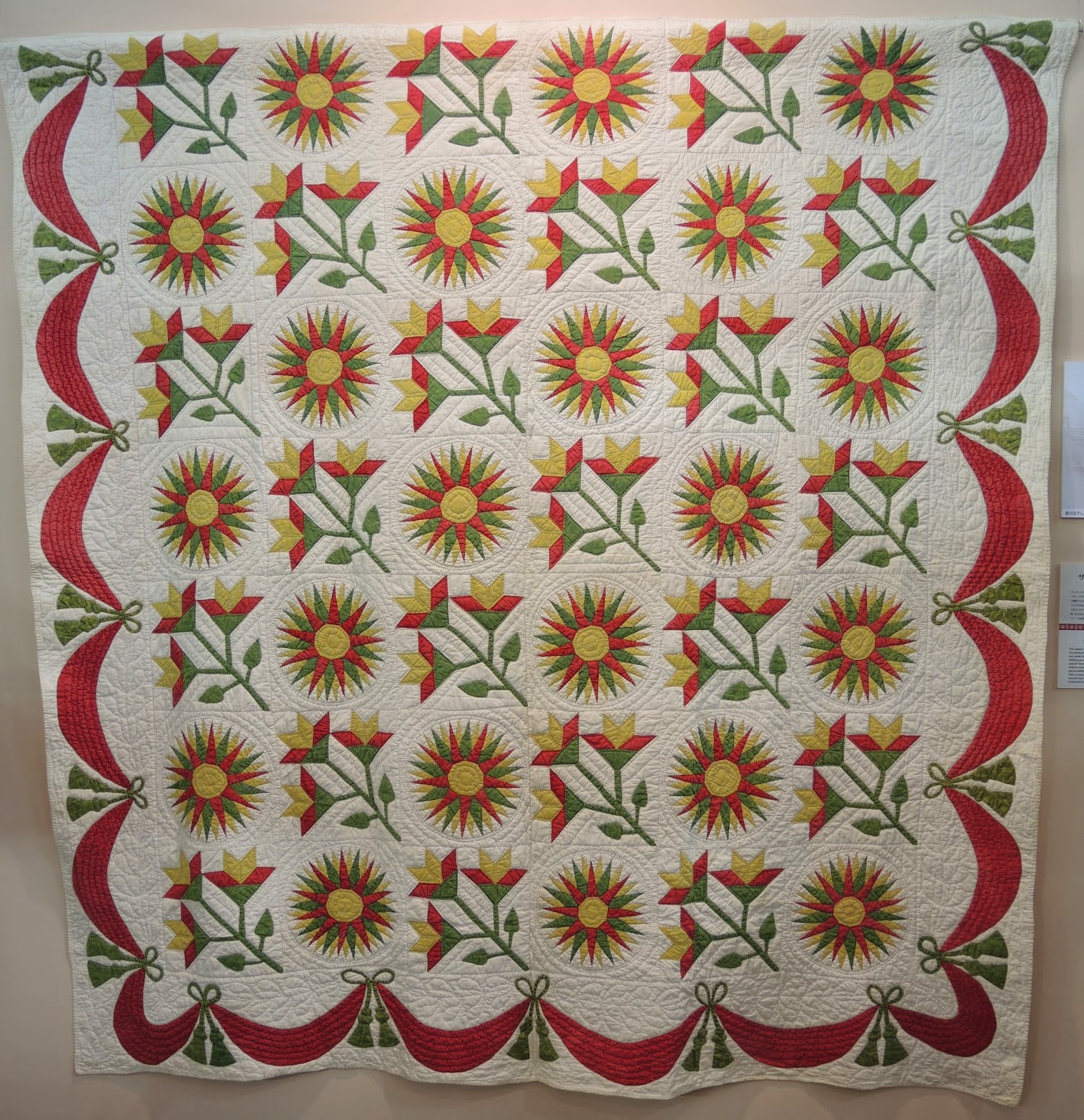 
This pattern developed as a variation of the Mariner's Compass into the sunburst. In the middle of the plains, days of travel away from the sea, made the ocean seem irrelevant to the pioneer women. But the blazing sun was a reality the women could understand, and the lily had special meaning to the plains women as well. The Native American Indians considered the lily a sacred plant because in times of scarcity, it had an edible bulb that could be made into soup. These two patterns were so popular that when the centennial of Kansas statehood came around both were featured patterns and updated/renamed as the Centennial Sunflower and Centennial Lily.

Though I had never heard of the Poos collection, I think it was a wonderful addition to be included.
I grew up with quilts like these and never tire of seeing them ... especially so lovingly preserved.
Posted by Julie Fukuda at 2:55 AM