I guess the best translation of "Wa" would be "Harmony". I am not sure why, but these quilts are probably what we would think are typical Japanese quilts, often using indigos and more muted tones. 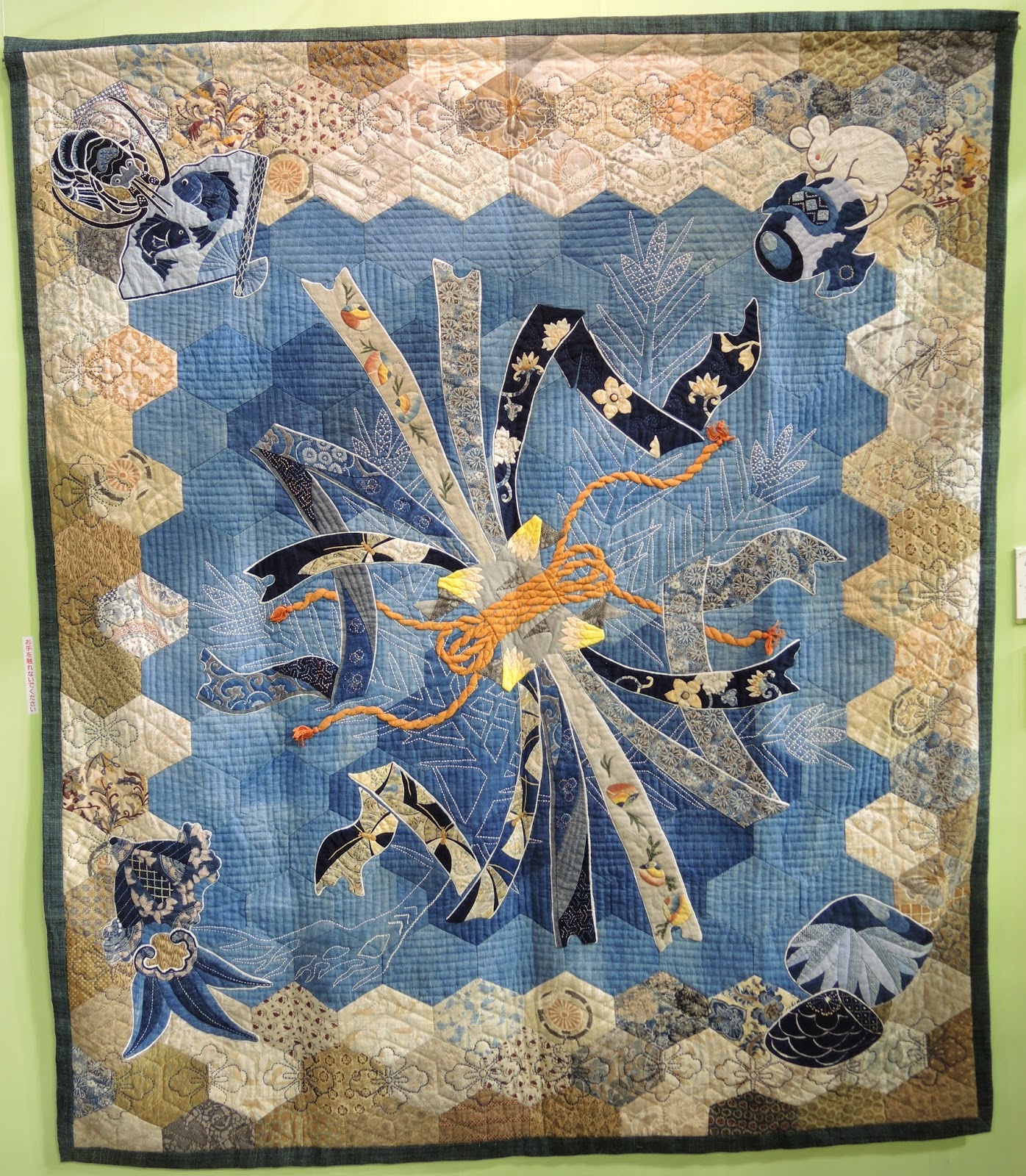 This quilt, roughly translated, " Auspicious Congratulations" is made by Yoshiko Uemura.


Not only the colors, but the noshime or strips of fabrics and the corner subjects call out their Japanese origins.

Check out Queenie's post that has great close-ups of the detail in this quilt. 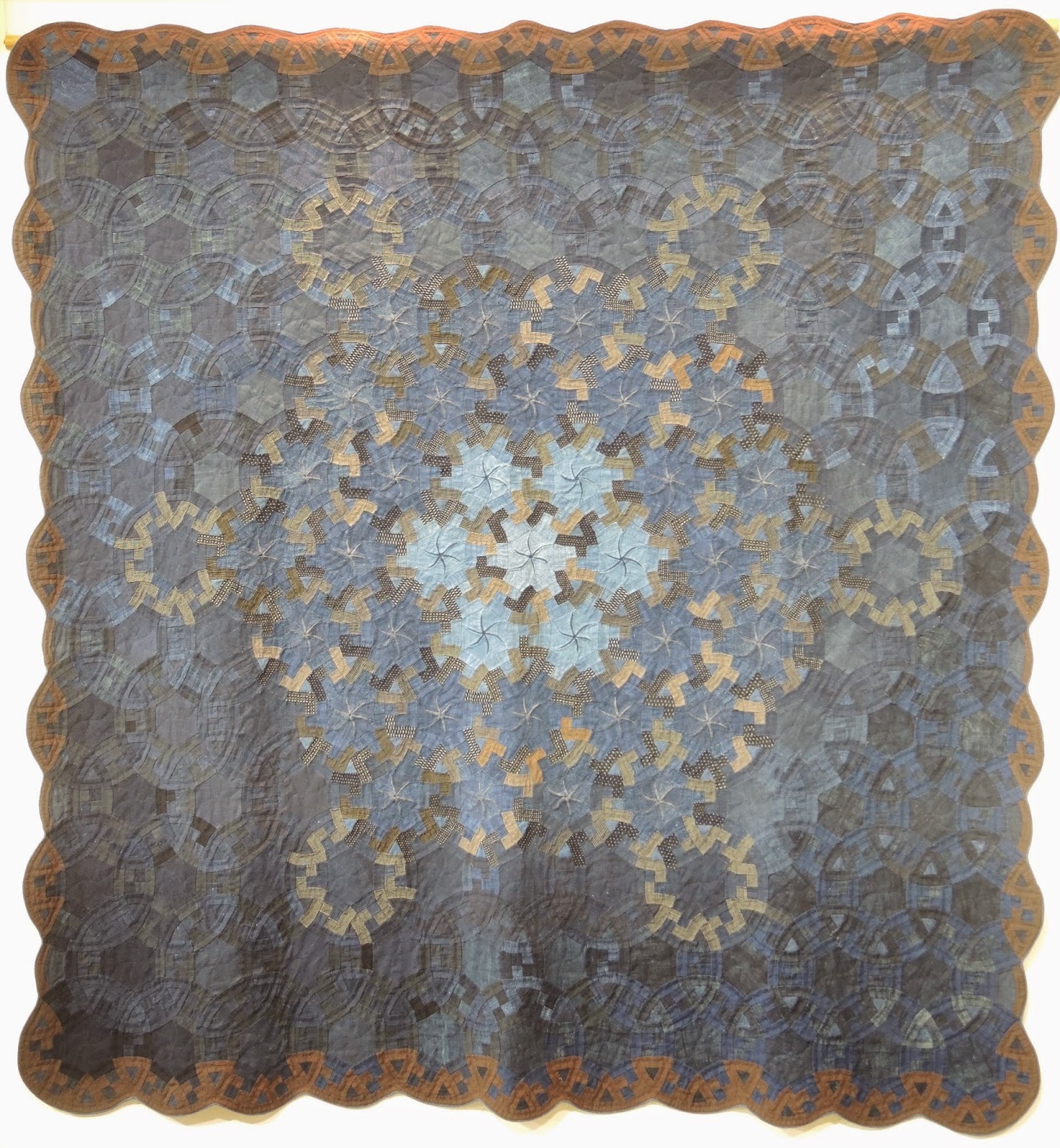 This quilt photographed a lot lighter than the actual quilt.

The title had something to do with watching the moon through the forest and it was created by a quilter named Ms. Saito. One would have to be a good guesser to figure out her given name.


There are lots of tiny curved pieces in this quilt. 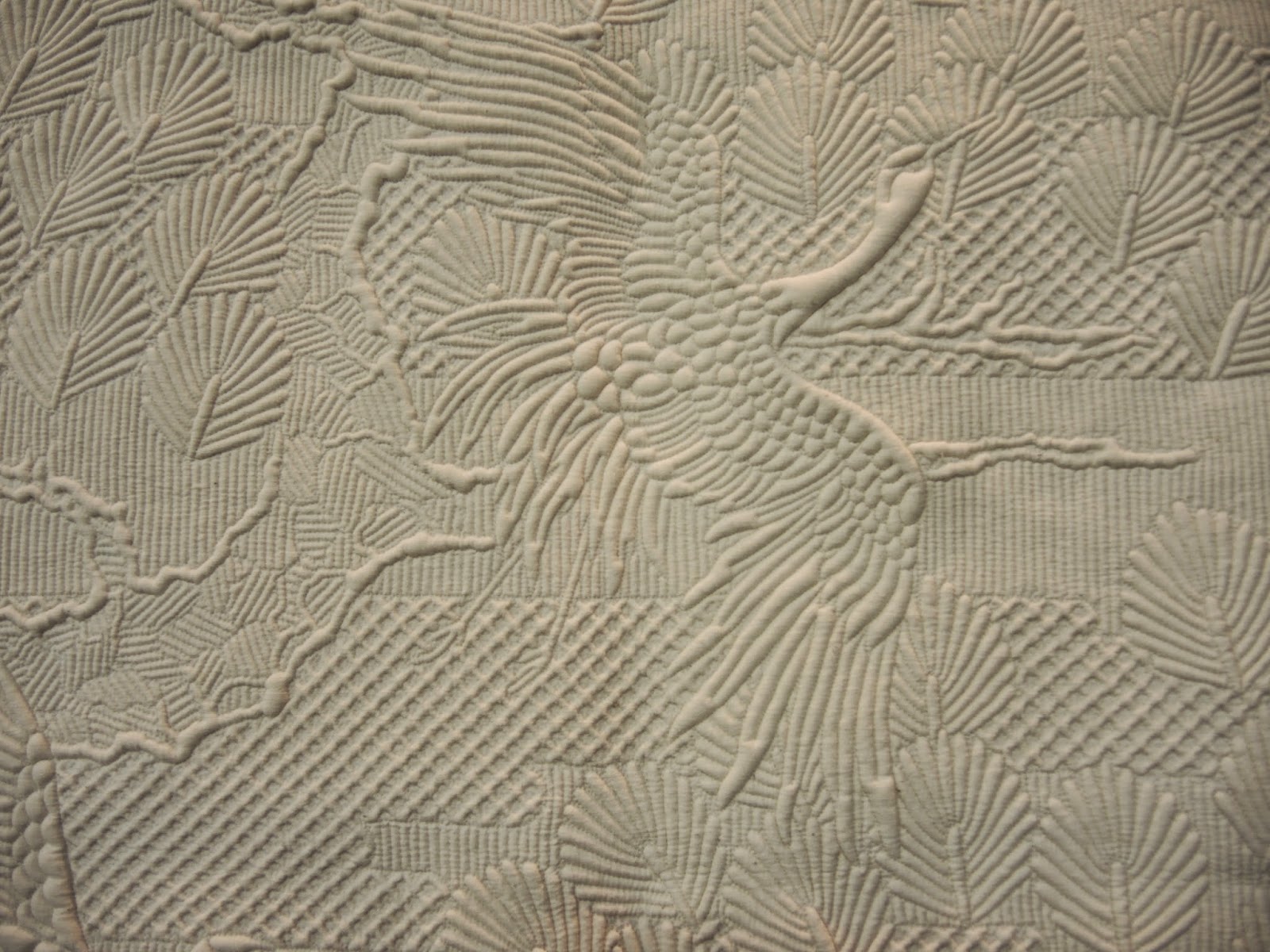 I have only shown a detail of this white-on-white quilt. It took second place in the Wa quilts and had a number of cranes in flight.

Titled"Fledgling", by Tomomi Ishii, it was a lovely piece of work but a little hard to see and even harder to photograph. 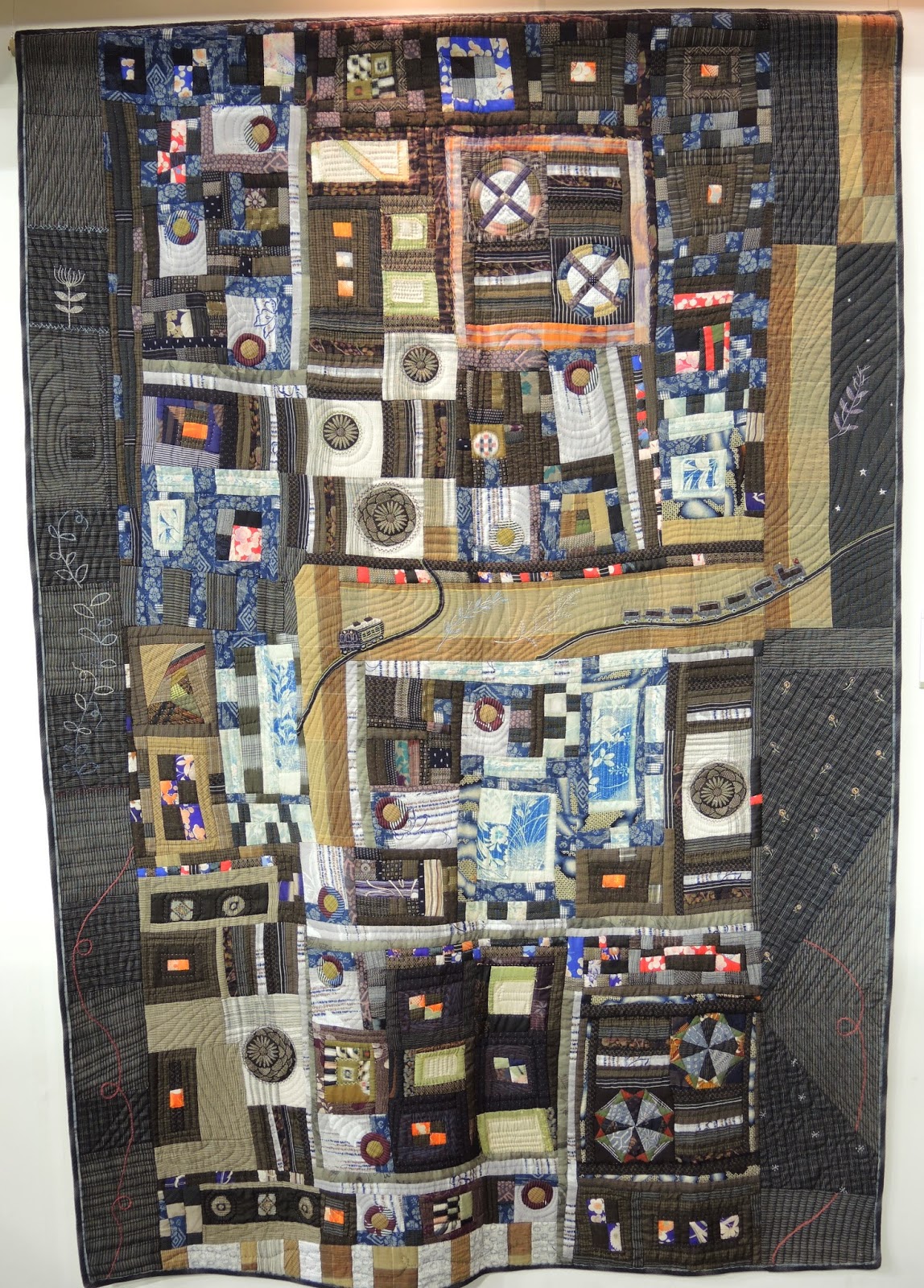 This was the third place winner in the Wa quilts.

Called roughly, "Re- Ring of Circulation" ,
it certainly contained an interesting combination of vintage and kimono fabrics. Maybe that made it a bit more Japanese.

Anyway, it was made by Ayako Takeguchi. 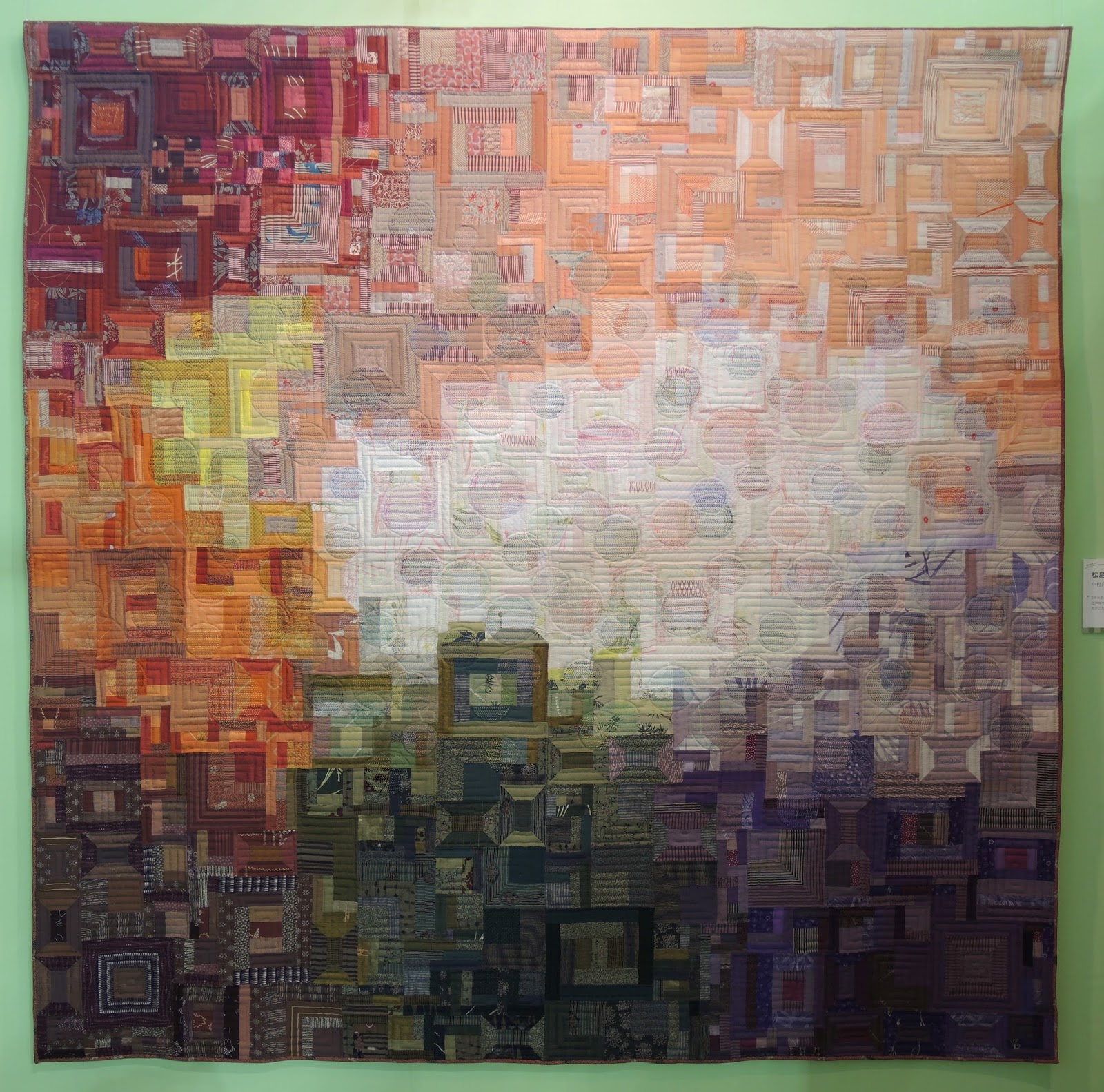 This one didn't get a prize but I rather liked it better than some that did.  It is "Morning Light of Matsushima" and made by Kumiko Nakamura. 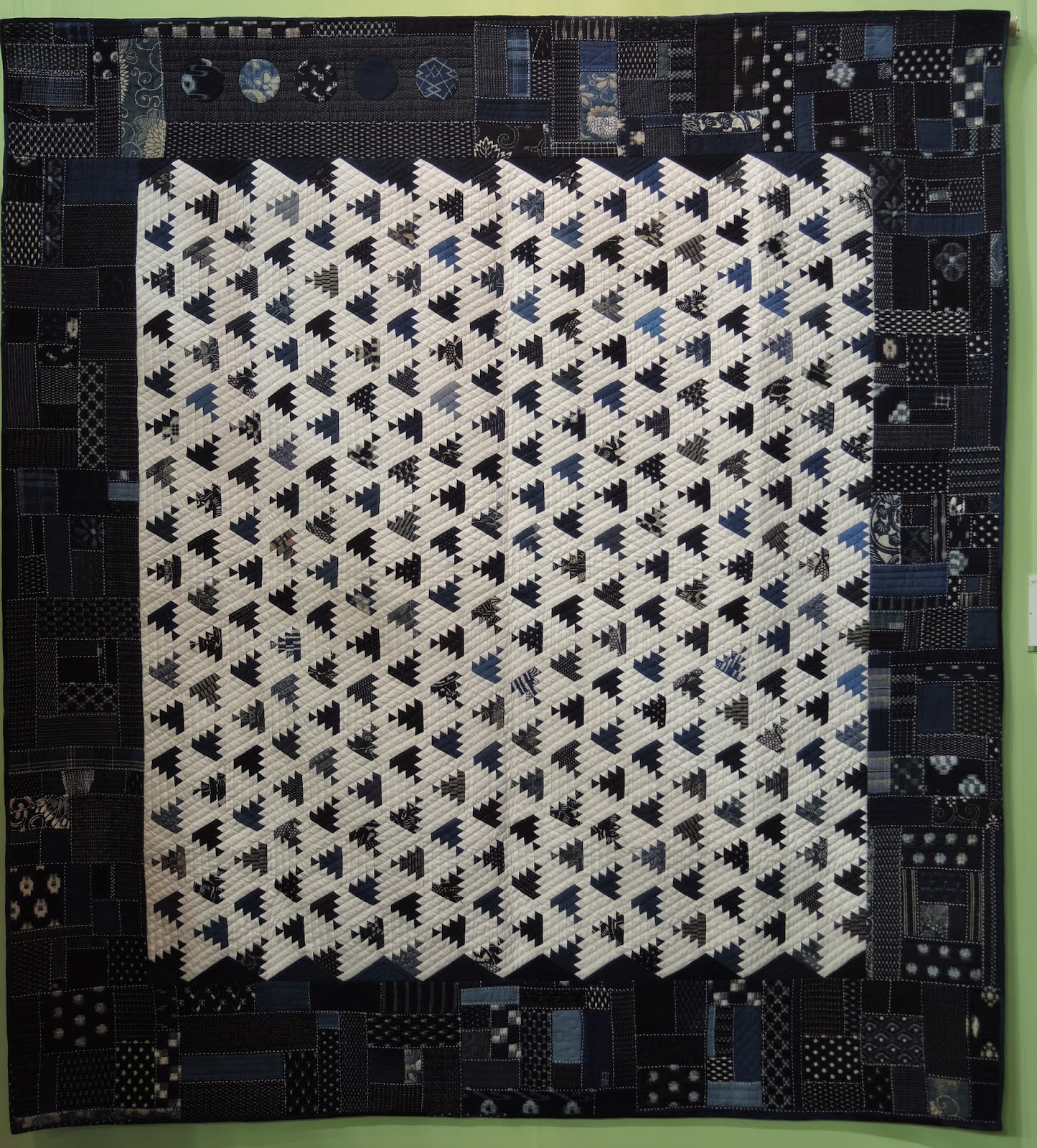 This quilt called "Hour of the Blue" by Kuniko Hishinuma is more impressive for the amount of work that went into it than the total effect.

The border is a symphony of vintage indigo fabrics. 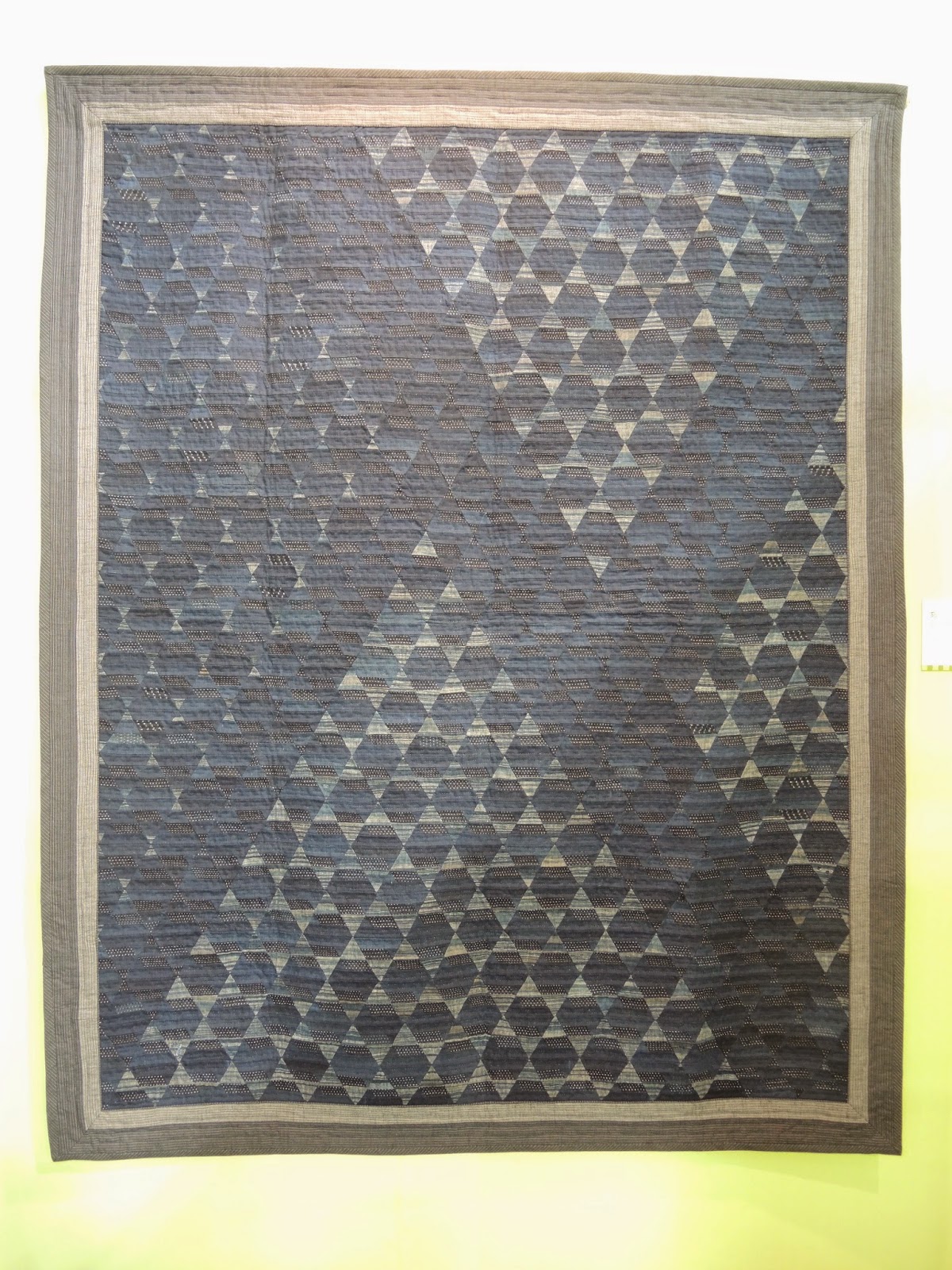 This quilt also was much darker than it appears in the picture.

I think my camera has a bad case of over-compensation and I couldn't figure out how to turn that aspect off but I thought this was quite a well-done piece.

Made by Chikako Furukawa, it is called "The Hour".

It had an interesting arrangement of traditional fabric hexagons  and must have taken quite a while to put together. 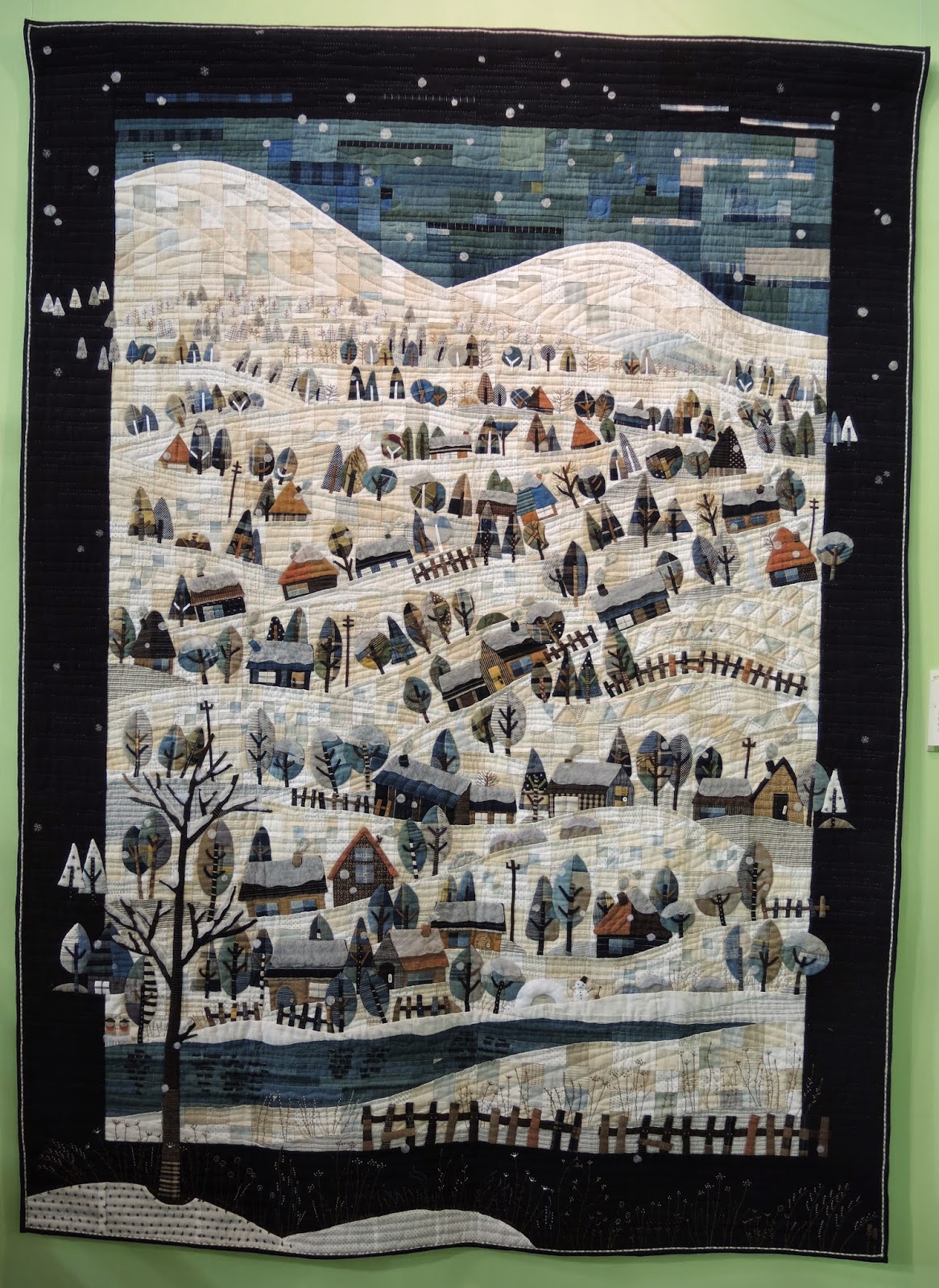 was also shown on Queenie's blog.

I think she showed some of the wonderful detail on this charming piece of work.


I think this beat out the prize winners too, 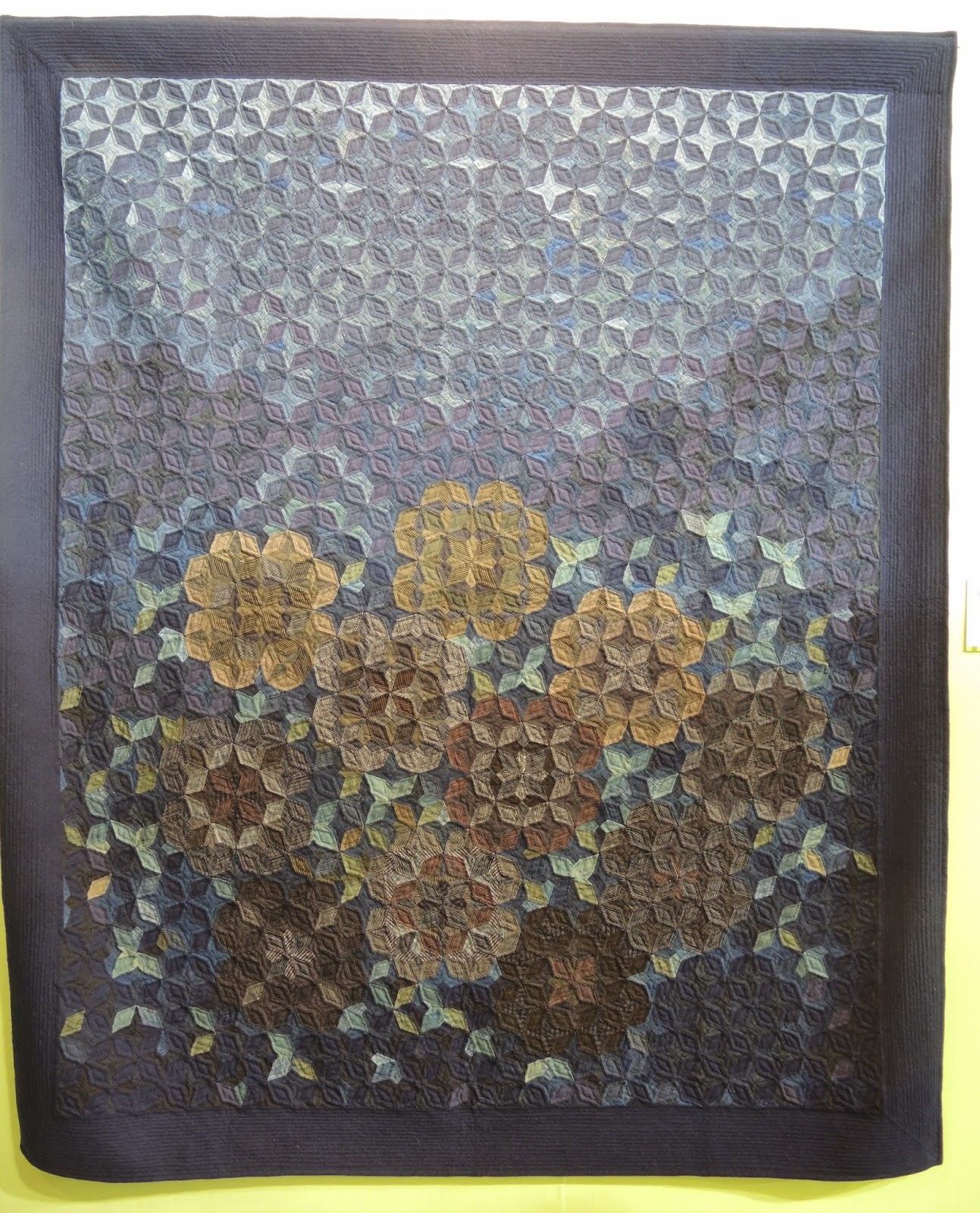 
I took a close-up to see if the color would show better. At least you can picture the amount of work that went into this piece. 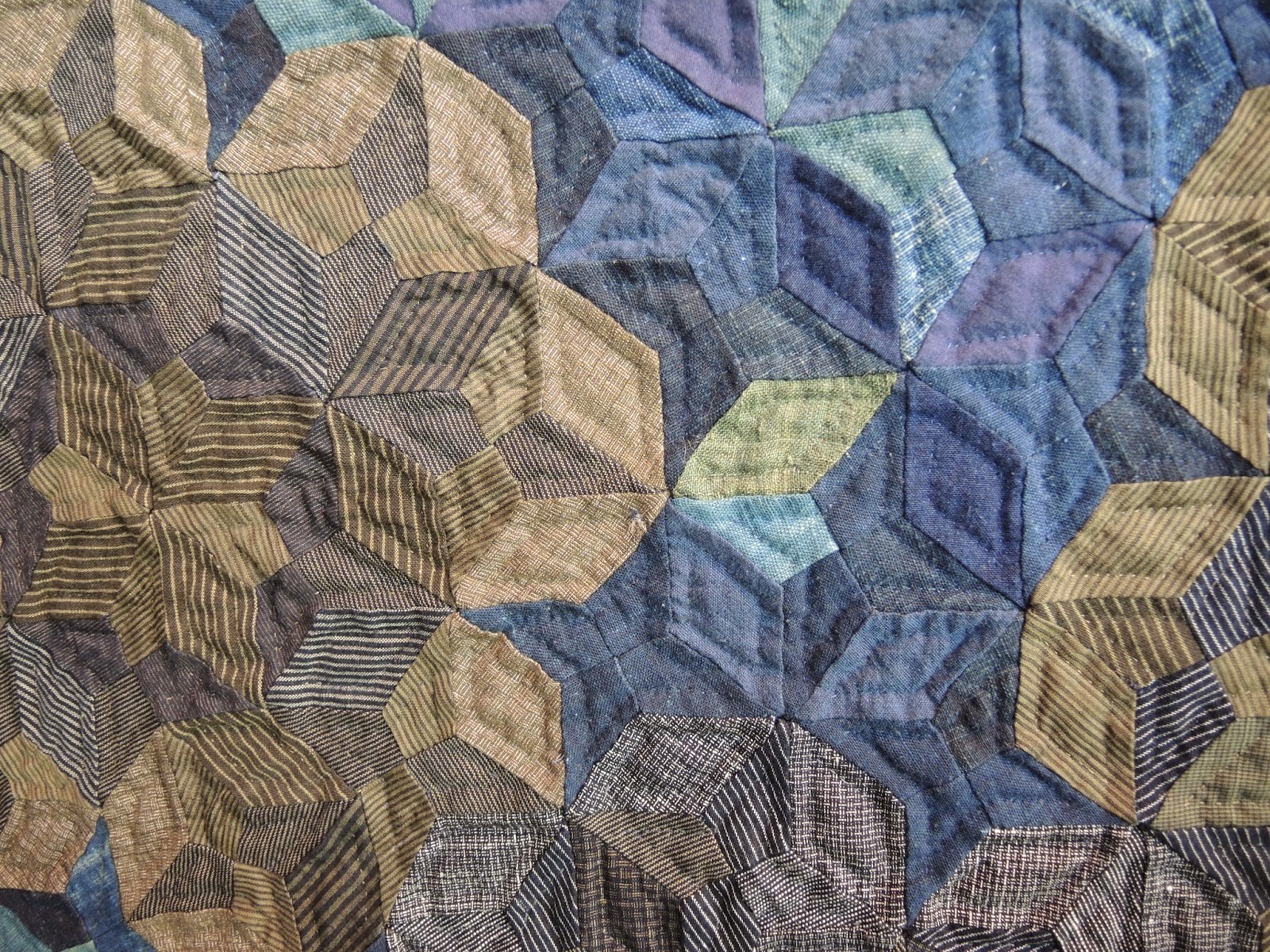 With this picture I will leave it to you to decide which deserves those prizes.

Do other quilt shows in other countries have such a category?

I can't think of something that would be typically American ... other than a quilt made of vintage feed sacks.

I think some of these quilters must have pondered a while as to which category to enter their work in.