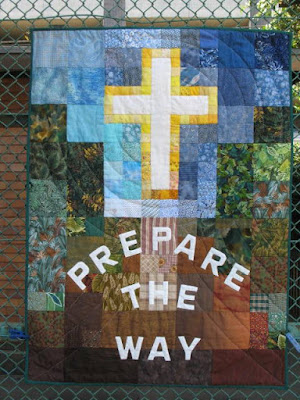 Or maybe the title should be ... finding the hoops to jump through.

Well, I finally got a picture to post, though I have not yet figured out how to edit or crop it.

While I have been without anything other than my mobile phone, I have had more time to work on this project.

This banner may be more of a compromise  than other years. Last year I almost quit because I did not want to waste my time adding more words, knowing they would have to be too small and not likely to even be read by people passing through the church foyer.

As it turned out, the pastor asked me to finish it as planned and give it to him. It has been hanging in view now for a year and many people liked it the best of all I have made.

However, this year's theme is the Shinkan-sen or bullet train. Since I was not overly enthralled about the image of jumping on the bullet train ... even if it might be heading for heaven ... I was removed from the committee.

A few weeks ago I was asked by the pastor if I was making a banner for this year. I told him I had been removed from the committee and had not been asked. Then a week or so after that, the committee head came to me and asked if I would make a banner. I told her I didn't want to make a bullet train and she could probably go to JR and get a poster of the Shinkan-sen that she could use.
There is some artist who is making projections that show the train tracks running off the top that have been shown during the service.

She has a fine connection with JR and her voice is one of the first things you hear when the English announcements begin as the train starts to pull out of the station. However, buying an expensive ticket and being then entitled to a comfortable seat, eating or napping or enjoying the scenery, is not an image that speaks to me ... and my train is usually the cheapie one where I stand and just try to keep my body above my feet while lurching from station to station.

Still, she wanted a banner and asked if I would agree to a bible verse ... to which I replied I'd give it a look and decide. Well, this is what she sent me. "Prepare the way". And this is what I could come up with from my stash. I had good advice on the quilting design from my husband and the choir members at the retreat. It was finished Saturday evening during our party and I picked up bias tape on my way home Sunday. My husband bought two dowels for hanging while I was at school yesterday. Tonight I will pass it to the church office.

At the choir retreat, one 14 year old son of two members came along and was kind to give me some time to show me where to find things on my new laptop. It is the same he uses for school but other than e-mail, the applications he uses are not the same as I use.

I wish I had taken my notebook along and written things down. He was quite fast to try things when what he could see didn't work. It did make me a bit braver to try without giving up. Even so, getting this one picture into a place where I could post it took enough effort and I still don't know how I did it. 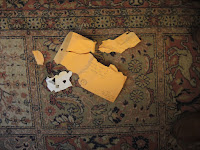 Now I am back to the Christmas tree skirt. My daughter sent me an envelope with two paper snowflakes to use as patterns. I traced the first one and while I was appliqueing the first one on to the skirt, Nikko took the envelope out of my file box and chewed it up, leaving only a tiny scrap of the second design.

I am also waiting for a few more from Jon's family. I can't complain because he was so quick to come up with this new laptop and whisk it into the post ... all set up and ready to use.

Then .... there is the Christmas hanging for Marie's door .... No more excuses, I have to get out my sketch book and get going.
Posted by Julie Fukuda at 10:01 PM