The rest of the story

Well, Saturday morning has come and gone in a whirlwind of activity. Friday was a National Holiday ... the Emperor's birthday ... and from early morning I had been off to Mochi - pounding with the Scouts. 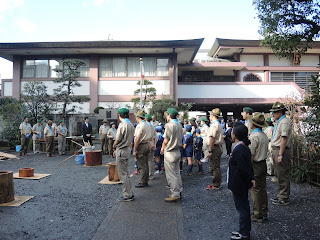 I arrived exactly at 10:am as the opening ceremony had begun.

My Scouts are lined up along the back row. 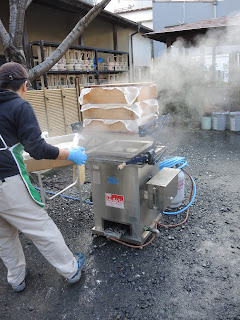 The rice was steaming in trays, ready to be moved to the stumps for some active pounding.

The chip in my camera had been swapped out with another and there was no room left for more pictures, but the scene changes little from year to year.

At the tables by the flagpole, Cub Scout mothers were lined up, serving Mochi in all kinds of styles and the most delicious "Ozoni" a soup specially made for the occasion and worthy of several helpings.

(actually, it is one thing I look forward to every year). 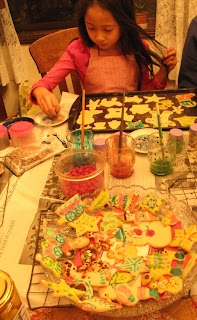 Norie and Leia came in the afternoon and the cookie guru set to work making painted cookies with sprinkles.

Some went into a box to share with her friends, some went with me to the choir, and the rest piled on a platter for Sunday's dinner party.


Norie and Leia spent the night on Friday and were in position in front of the TV by 7:30 am.

It was interesting to see what the TV crew had picked out of three hours worth of filming to show. After a bit about Tokyo Union Church, there was a video of Nikko and me walking along a back street. Luckily they left out the part where I was picking up trash.

They played some of the clip with the Rice-store lady "Kanazawa-komiya-san" Having suddenly appeared at her shop with a camera crew and a reporter with no warning at all, she came off her usual warm friendly self.

Then there was some interview in a corner of my rather cluttered livingroom ... a bit of stitching ... and a bit of quilt showing and some chatter about the "early days" in the 1960's. I didn't record the program ... actually, I don't know how to use all the gadgets with only Japanese labels, but they said they would bring me a DVD and that can be copied and sent to the kids.

The rest of the interview featured another member of our church, Wally Higgins, who was my husband's best friend and has worked many years for Japan Railways, and probably has more knowledge of the railroad system than any other employees. He has an archive of historic photos.
I have a suspicion that he may be the one who got my name in the pot.

Today, the reporter called to ask my permission to post it to their web site. She would send me the link in a few days.

Tanya watched the program in far off Nikko and posted some pictures on her blog. http://bytaniwa.blogspot.jp/2016/12/nhk-tv-program.html (along with many very kind words)

The rest of Saturday was spent prepping for a big dinner on Christmas day. Having Christmas fall on a Sunday made the schedule that much tighter but we managed to make a pumpkin pie out of fresh kabocha and also a pecan pie before I had to rush out to my English lesson and then to the church.

The choir sang in two services Saturday night. and there was a special choral offering by the small group.
Though I have been fighting off a cold and cough, my voice held out enough to do my part.

It was way past my bed time when I returned but I could get the stuffing prepared for the turkey before turning in.  Sunday was an early start. I had to smile when, on my way to the train station, a lady living near the tracks came rushing up to tell me that she had been watching the TV Saturday morning and saw the first picture of me walking the dog and was so happy to see the whole show. 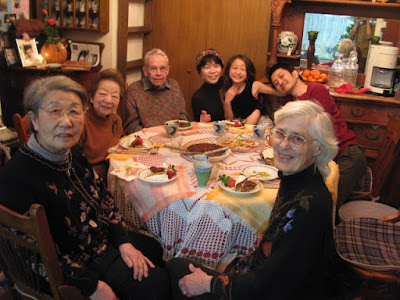 The rest of the day was a scramble but the food was ready when guests arrived...

The dishes have been washed and put away, the turkey bones for boiled down and became a yummy soup 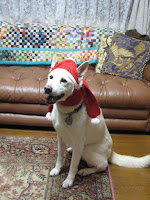 The official greeter finally could take off her regalia for another year ... 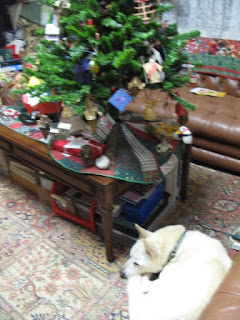 And now in leading by example.


(or maybe she is dreaming about turkey left-overs)

I hope you all have had a happy holiday ....