"No-man's-land" belongs to my neighbor 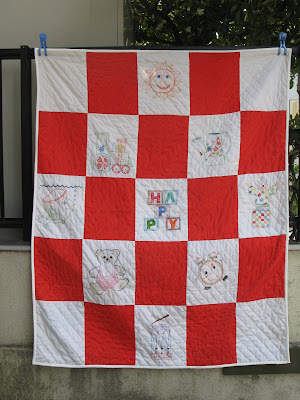 It has been 48 years since we moved from our tiny walk-up to this site. When we came, the house was a duplex and we lived in the back half that opened onto a dirt alley.

Over the years, the neighborhood has changed a lot. When our landlord died, the family sold the house to pay the inheritance tax and since we had been renting the place since it was built, we had first dibs. It was before the "bubble" and seemed like a good investment at the time, so we bought it, paid the other renters to move out, and re-built on the site four very small apartments and a section for our parents ... or as it turned out ... Mother and sister ... to live.

Re-building meant losing a few meters on each side to be saved for widening the road but we knew the people in the neighborhood and liked our quiet walkers-only street.

Many people have left over the years and houses to the East and South have been replaced by tall sun-blocking apartments.

The picture here is the quilt my mother made for my #1 son. He is expecting a son of his own this summer and I wanted him to have his baby quilt but it was in very sad condition. I began working on replacing the quilting a while ago and my daughter saw it and said she would like to make a gift of her time and talent to the new baby, so she took the project home and replaced the stitching and re-did some of the embroidery where  it was worn. This week I replaced the binding which was shredded. It is now ready to make the trip to Oregon.

Here it is hanging in the shade on the wall of the neighbor to the South.  Sometimes I hang smaller items on the gate of my neighbor to the west. At last out narrow dirt path has been "paved" ... that is, covered more or less with a layer of asphalt. We still have no drainage, thus a lake when it rains, and, since the surfacing is rather spotty, we have pretty little flowers growing along the base of our wall.

We lived in a few other rental spots when the family was large but now that the value is about equal to what we owe the bank, and with my mother-in-law no longer living, we have moved back.

I am happy with this status and It will probably remain this way through my lifetime, due to our neighbors to the North. As long as they do not rebuild, they will not lose a meter of their property along the back alley and it will not be turned into a road.

How can I know they will not rebuild? THEIR PROPERTY is very IMPORTANT!!! I don't think they would dare lose even one inch. When we rebuilt, they were very unhappy because they wished to purchase that property to expand their area. They were so unhappy that they came into the construction site at night and measured every inch to make sure we were not making the place any bigger than allowed. They made us put up tall barriers on our balcony so no one could look over into their garden and they placed boards with nails poking up through them along the top of the wall facing our house so no one might climb over the high walls.

Over the years, the old man of the family who harassed the whole neighborhood died and things calmed down a wee bit. I placed fruit on the nail spikes for the birds in winter. I took down part of the barriers on the balcony to let in a bit of light and air. (I do not spend much time peering into their garden). A few years ago I pulled off the last of those rotten boards with rusty nails and tossed them in the trash. 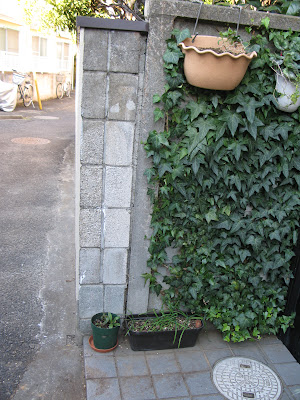 When the earthquake came, many of these block walls suffered. It is common knowledge that in a quake, you are to stay away from walls like these. This wall also moved a few inches to the West and lost a lot of the stucco from the surface.

Earlier this year, the wall underwent rehab and got a new face and coat of paint. Well, they didn't make it straight and the corner facing our entryway was left as is.

Well, it is not our wall but it is what we see each time we step out the door so I tried to hide some of it with ivy. Every so often, the neighbor ... now the son of that old guy ... comes over and pulls all the ivy off his wall, leaving it in a heap by our door. Another thing I have done is put a beautiful spider plant on the top corner so it would hang down and soften that ugly surface. I hung a few planters and usually have something in bloom most of the year. 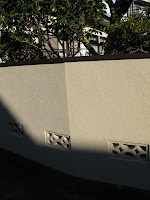 Here is the beautiful garden wall for the rest of the world to see.

Peeping over the top are flowering quince, Many kinds of camellia, a persimmon tree, and a lovely crepe myrtle.
They are quite beautiful and also quite messy, and since this is the back alley, not a place where they sweep. In fact, 99% of what I sweep up in front of me house has either blown or floated down-hill from outside their wall.

I really don't care. It is nice to have such a beautiful garden right next door.
But now, the story gets very strange. . . 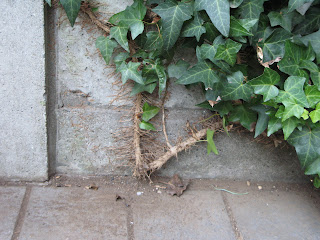 A few weeks ago, on a Sunday morning when we were not home, the neighbor came over and cut all the ivy off about four inches above the ground.

He also removed the plants from the top of the wall.

Some of the ivy died back but now it seems it will recover. I put the plants back up because no one had made any effort to come 'round and sweep, so I didn't think they would even notice a flowerpot.

Wrong! Flower pots set onto the sidewalk. And what is even more strange is the "hole". 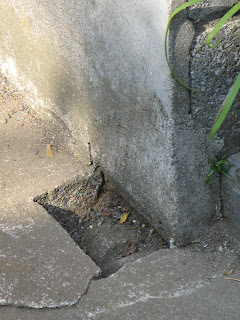 Right at the corner of the wall is this square hole. I think at one time it contained a wooden fence post, now rotted and gone. It fills with dirt washed down the river each time it rains and I thought it might look a bit prettier with a few flowers so I planted a few bulbs of small flowers. They are only a few inches high and not messy at all. They grow along the same wall up the street and look very pretty.

Then one morning, about a week ago, my husband came home and the neighbor was doing something there with a shovel. When I looked next, the hole was all cleaned out. It has filled up again twice since then ... each time it blows or rains it catches whatever is along the wall. BUT NOW the guy who never sweeps is fixated on that hole. If he had spoken I might have told him not to worry, that I wouldn't waste any more bulbs on that spot. 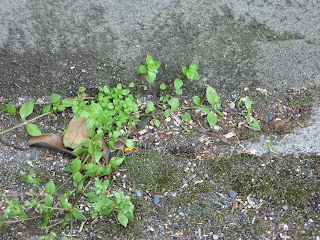 The weird part of the story is that the whole length of the wall along their house is covered in weeds that have never been touched.

My husband is scratching his head over this, wondering what is going on.

The only thing I can think of is a dog, using that spot to mark his territory. Surely, you never know what you will find when you step out my front door. 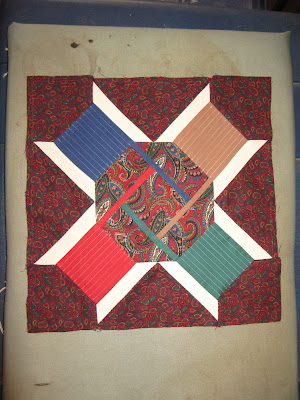 And ... on the ironing board is my second block for the Quilter's Book Club.
I wanted to make something to represent "A Single Thread" by Marie Bostwick and thought the four spools could represent the main characters with a thread coming from each and joining into one. I'm not sure how to make them one in the center but the basic block is done.

Now I am in planning mode for this month's book, The Quilter's Apprentice, bu Jennifer Chiaverini. I had read this once before and am surprised at how much I have forgotten of the story.

I am trying to put a piece of my "pickle" fabric into each block but it is a hard set of colors to work with. I have no idea where that fabric came from. I'm certain I didn't buy it but there is a big piece of the smaller print if I can only fit it in somewhere. Nothing like a challenge to keep your brain in action!