Well, The computer must have figured I was frustrated enough and decided to fix itself. When I opened it up this afternoon, the first thing I see in the place to sign in my password. Usually it is just a little lighted slot. recently I am getting a touch-screen keyboard instead, but the screen had gone back to the original look. Today when I flipped the top open  ... there was the touch-screen again.

Well, after putting in my password, I decided to test the camera again. Sure enough, this time it worked and I could down-load pictures again.

So, here are some non-quilting pictures of my time without the computer. 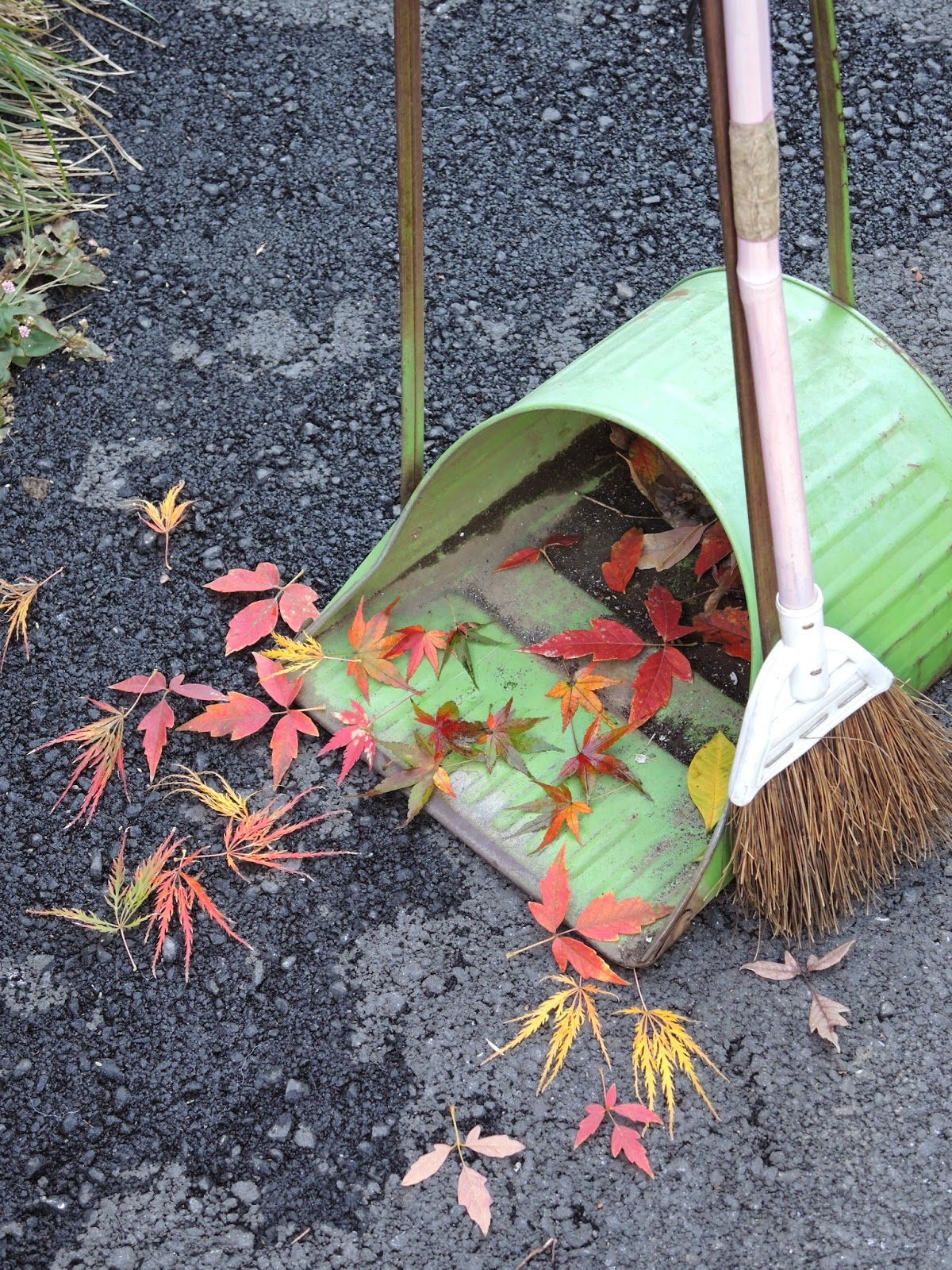 Each morning I sweep the street ... down one side to the corner, back up the other ... and around our corner.


This week most of the sweeping is persimmon leaves and maple leaves.

These are the ones from in front of our house ... and my little sweeping bin ... the broom hangs from the handle. 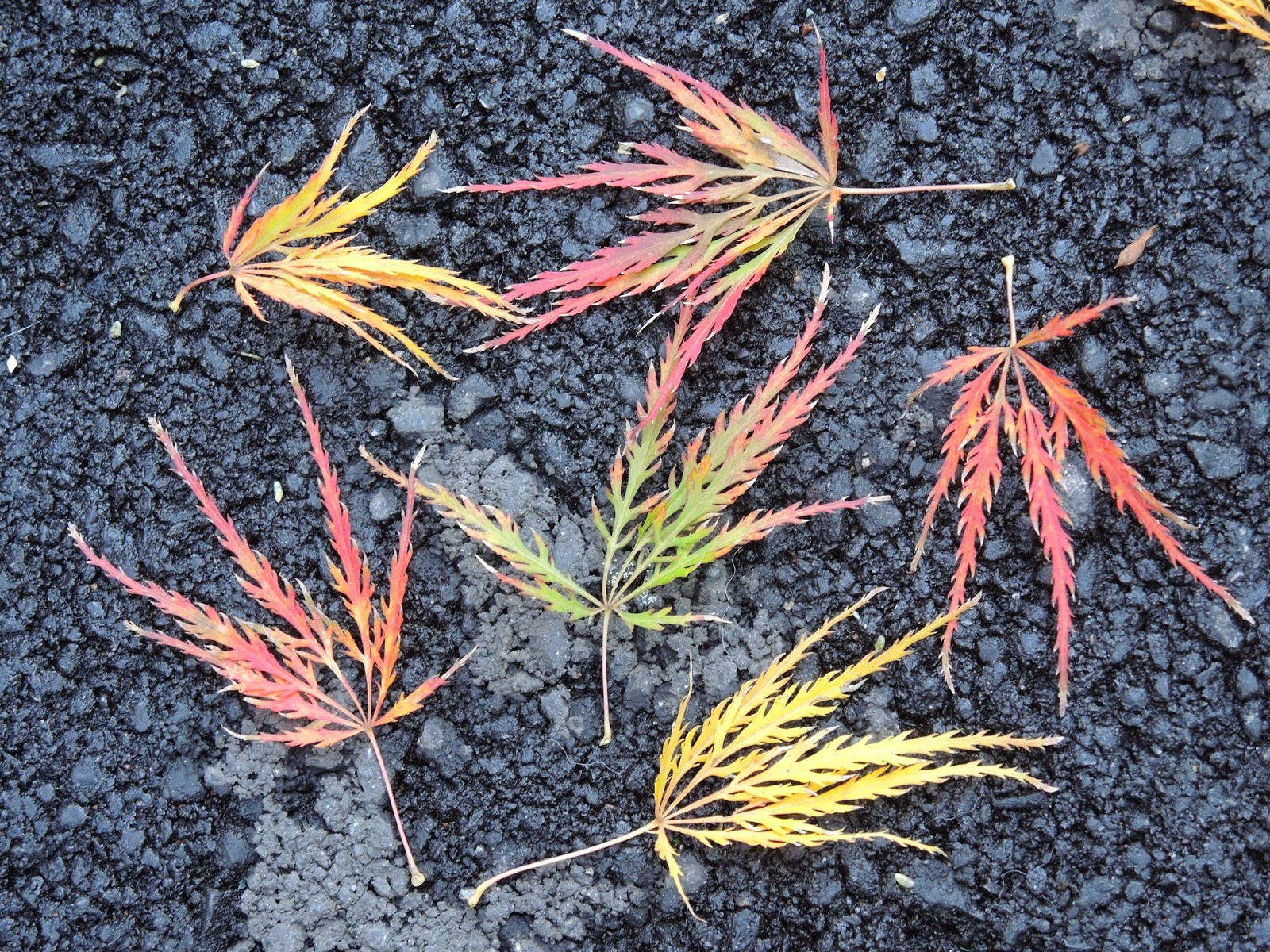 The cut-leaf maples have been red for some time and finally begun to fall.

Most of them get caught up in the azalea bushes
but a few make it all the way to the new pavement. 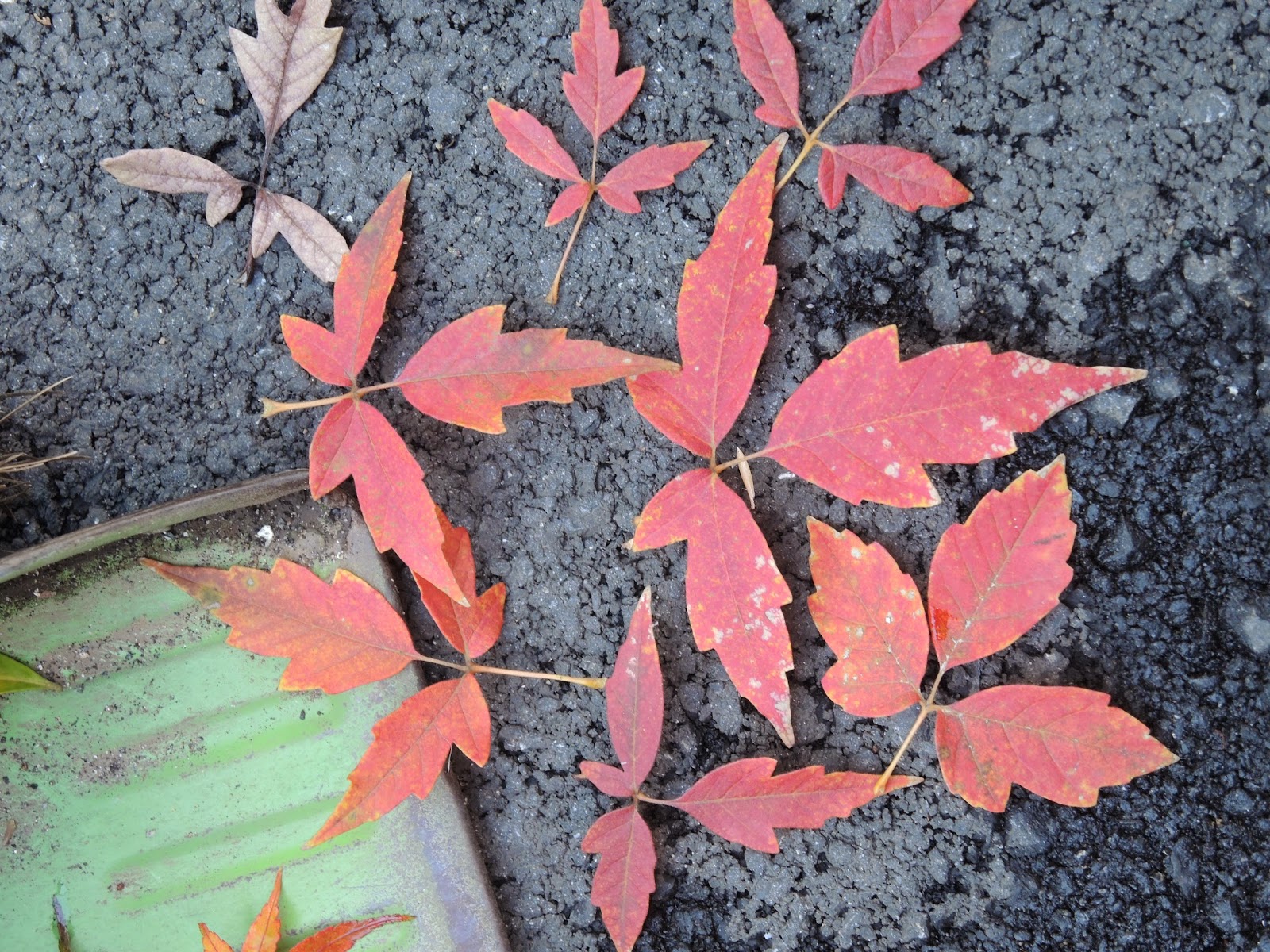 When we moved back to this house, I had some of the enkianthus bushes removed to make room for a few other plantings.

This maple was supposed to be a snake-bark maple but that is not what it is.
My Japanese tree book shows one three-leaved maple, Acer cissifolium, but the shape of the leaves is different with smaller lobes and the stem is red. I don't think that is what this is.

I found a Paperbark Maple, Acer griseum, in the "Sibley Guide to Trees" that I picked up on my last trip to the states. The leaves in that book are also a bit different  but much closer and the bark of this tree has become a bit shaggy in the past two years. The tree is still rather young. It does have pretty color in the fall and that was what I was looking for when we bought it. 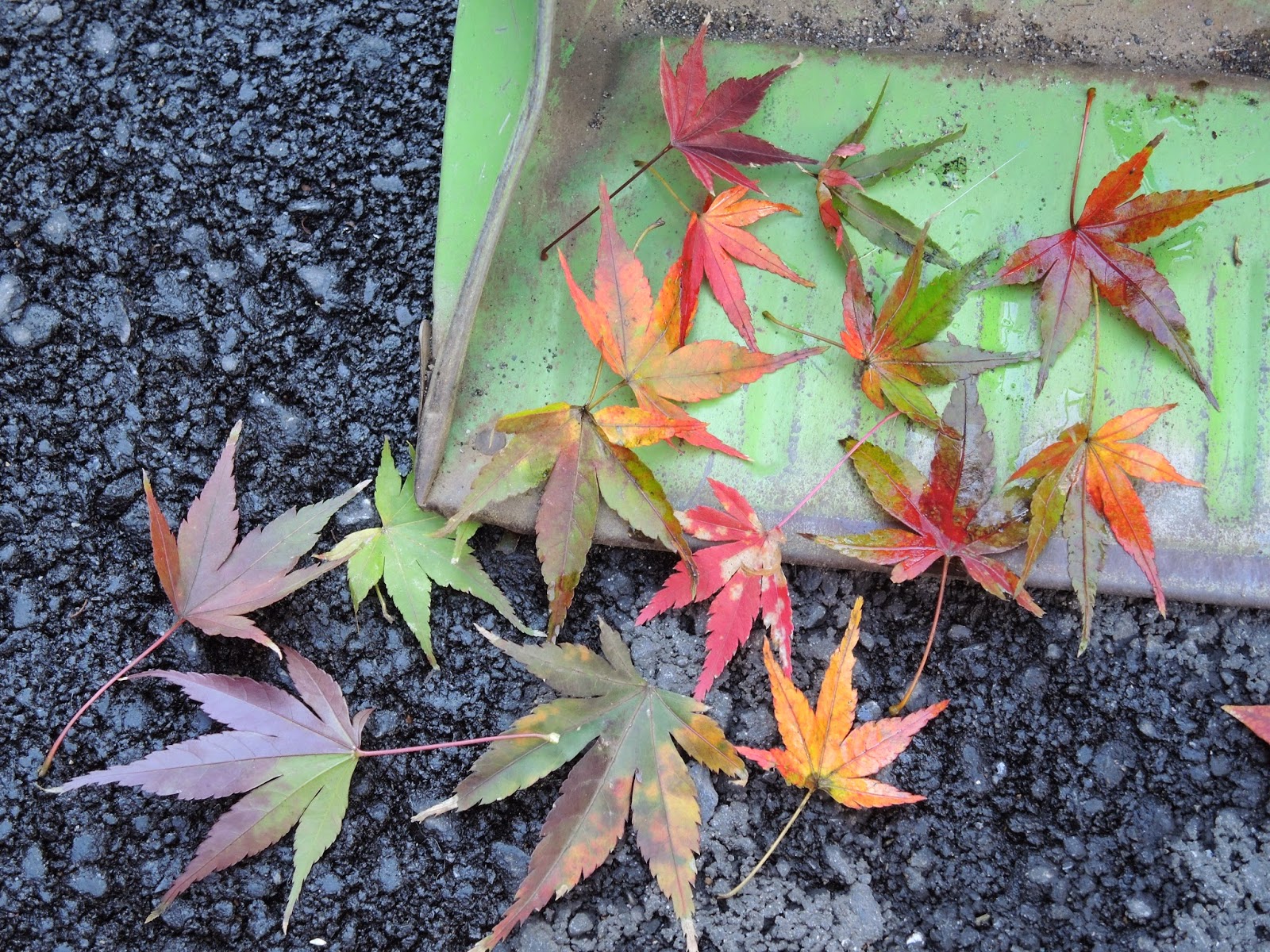 The third maple came to us in a pot.

It was rescued from the balcony of a friend who ad moved to a new apartment and didn't have room for it,

It sits happily on the entry step.

Our neighborhood has two other Japanese Maples and these days those three trees fill my bin before I even finish the street. 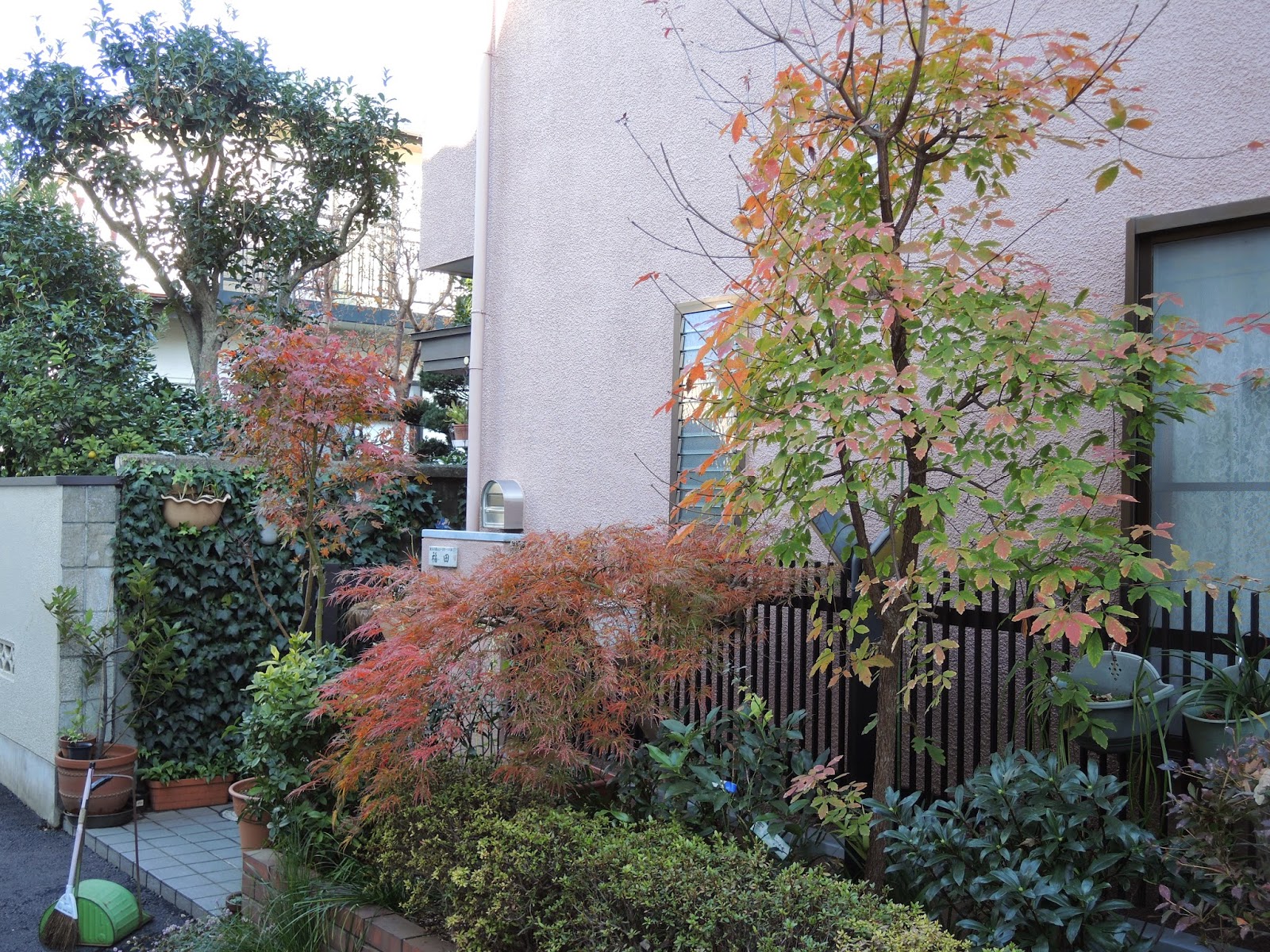 My husband thinks we should name our home "Three Maples".


Can you tell which tree is dropping what?

For a tiny plot, we contribute plenty of leaves ... especially if we add the Plum.

Today I swept up Cherry tree leaves and Keyaki (Zelkova). The nearest cherry id two blocks away and I have no idea where the Zelkova leaves are coming from but the wind has been strong and cold.

The Great Tits were complaining that I should move so they could come back to the window feeder.
And now that the picture down-load is back to normal, I'd better get back to the "real" work.