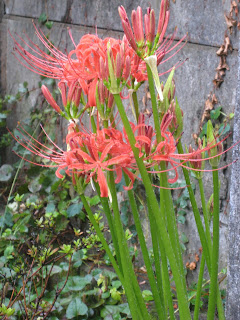 After about a month of rain followed by weeks of super heat and humidity, we had about two cool days.
Now it is hot and humid again and the plants seem to be confused.

Just Monday, on my way to school, I saw the buds of the spider lilies beginning to pop up.
Tuesday they were already open and declaring it is fall.

Meanwhile, the Autumnal equinox they are known to proclaim, won't be here until the 23rd. 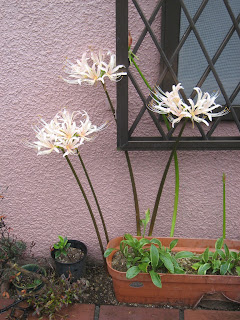 I walked around to the east side of the house  and those were also in bloom.


Because of "set-back" the garden here is only six inches wide and the flower pots are there to keep neighbourhood cats from using the space as a litter box.

The lilies are coming up behind. 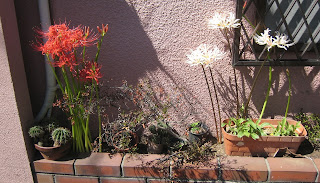 This morning they have been joined by the red ones.
Just as spring marches in one flowering plant at a time, autumn usually proceeds in a similar way ...
The gardenias second blooming, indicating nights becoming cooler, then the Higanbana (spider lilies), then the hototogisu or toad lily, and in mid to late October, the sweet olive (Kinmokusei and Ginmokusei ) perfuming the air.

I admit I look forward to autumn weather  (not the typhoons, but the cooler nights and blue skies.
I even noticed, looking out the third floor windows at school, that the leaves on the dogwoods lining the street are beginning to turn red. Last year's Goldenrod now has a house going up on the site and the pampas grasses are still thinking it is mid summer. 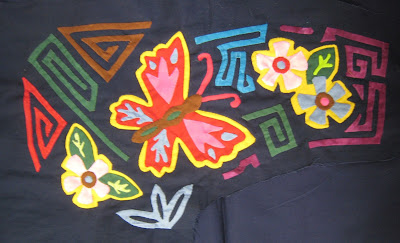 The mola grew a couple of flowers to keep the butterfly busy ... if he can find them through the labyrinth.

Friday ... and my quilt group is close on the heels ... it is a very small group but if I don't get busy quickly, there won't even be a place to sit ... nothing but dust and dog hair ... and to top it off, while I was gone on Monday, Nikko chewed up a bag of something. I lock her out of the livingroom but she found something ... maybe flower seeds in a baggy, and there was torn up plastic spread all over when I went up to bed that night and she had been having bowel troubles ever since and leaving messes here and there.
Time to set handwork aside and tackle the giant spoon that has stirred up my living quarters! I wish cleaning would go as fast as the flowers this year.
Posted by Julie Fukuda at 7:28 PM

Email ThisBlogThis!Share to TwitterShare to FacebookShare to Pinterest
Labels: Mola