Yesterday included a long trip into town for a District Scout meeting. Usually, I just attend on line but that meeting was a chance to meet the newly appointed District Executive. Actually, that part was rather a dud as she only spoke up to give her name during the hour and a half I was sitting there. The only other thing I heard from her was after the meeting when I introduced myself was that she lived on a base and was here for three years with her husband's assignment. I guess for time spent, the best results were two long inner borders added to the quilt on the train ride in, three outer borders added during the meeting and the ride home. Now the flimsy is finished and I need to hunt up something for the backing. 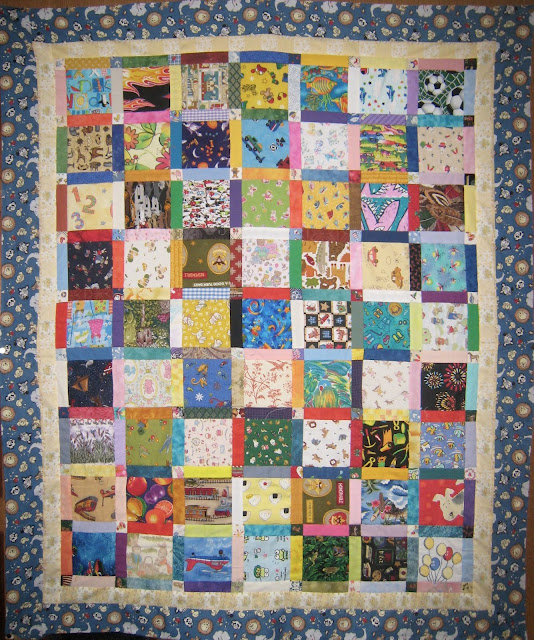 I used a light yellow pseudo-quilt block print for the inner border and an animal print for the outer one. Next year is "the year of the dog" so maybe I can find some doggy print to use on the back.
That will be my next task to see what I can dig out of my stash. Too bad the baby is not a girl because I have lots of florals in large amounts.

This will no longer be take-along work but now I am satisfied with the size.

Another trip into town tonight for choir so I will need to prep some more take-along work. Guess it is back to the stash for more than one solution.....
Posted by Julie Fukuda at 6:24 PM