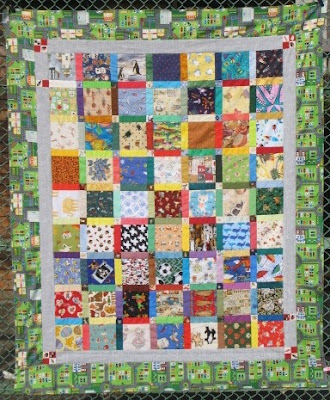 Last night I put the final stitches into the next "I-Spy" quilt.
This one for a little baby boy.


I took this picture in the park during Nikko's morning walk.

Then I dug through the stash and found some fabric that will work on the back, pieced it, and then pin-basted it.

Now the quilting has begun, starting in the middle and working out in all directions.


Once I got to the borders it was a bit too large for take-along work. Hopefully I will have enough home time the next few weeks to get this finished up.
The center block area is all in-the-ditch and I may put a cable in the two-inch grey border ... then maybe quilt the parking lots in the border fabric.

Last week was over-busy and Friday was spent meeting the English class of some friends. Saturday was the wake for a good Scouting friend. I was pleased to see much of the scouting community stepping up to help with many of the duties. After the main service, the scouts and leaders linked arms in the hall to sing "Scout Vespers". It was quite a moving end to the ceremony.

Sunday after church I had to gather things together for my Cub pack's pinewood derby. I did not have a car to race because we were short kits this year, but I was busy helping the scouts adjust the weight and add graphite to their cars.
Some of the track was missing and, because we had booked the activity room and set the date, we decided to make do as best as possible. With the help of duct tape and the wonderful parents and leaders, we were able to pull off the event ... even without the computerised gates. What a relief, as the date to submit the winners names to the district event was the next day.

Monday began with my usual rice delivery and school. As I was going up the very long escalator at the train station, their was a loud noise in the neighboring down escalator, and everyone looked to that side to see a huge hard case suitcase sliding down the moving steps, picking up speed as it went.
At the bottom it hit a lady from behind and wiped her off her feet. Two people waiting on the up-side rushed over to grab her up before she got caught in the stairs at the bottom. Then two guards rushed in.
The young man owner of the bag, who had been too busy on his cell phone to hang on to the bag, rode slowly down and was talking with the group as I got off at the top. It was a very scary event that has stayed with me ever since. I remember when Ken was just a little boy, he got too close to the edge of the stairs, and the escalator grabbed his shoe, pulling it off his foot (Luckily) and grinding it up in the stairs. I also remember a little boy in the hospital who had lost fingers in an escalator. That is not a place one would fall casually.
Even more scary, was on the three more sections going up, I saw two bags with young people not holding them ... one with a girl turned around talking to someone behind her, and another young man on his device. Neither was as big as the one that came careening down the steps, but still.... 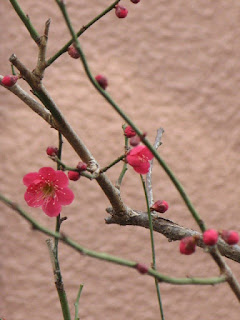 The days are still cold. Rain over the last week finally removed the last of the dirty snow drifts.

The plum is in no hurry but a few brave buds have defied the cold and are beginning to open.

Today is the birthday of my third daughter.
We didn't have a chance to get together other than last Saturday at the wake. 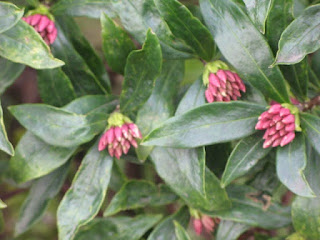 The Sweet Daphne planted for her seems to be thinking about opening ...but taking it's time in tune with the plum.


I did see a few bushes in bloom in gardens that get full days of sun.

Tomorrow begins another month.
Friday I have a quilt group meeting so my work can go with me.

The busy days help me to appreciate the down time.
Posted by Julie Fukuda at 3:32 AM