Taking a bit of "down time" 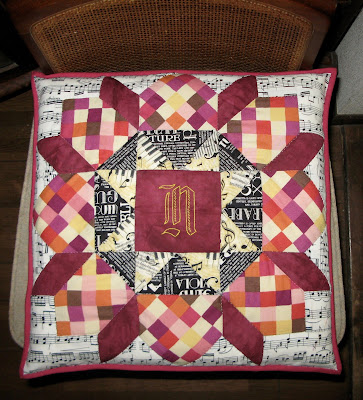 A few years ago, our choir-room chairs were changed from folding ones to some rigid stacking ones.

At that time, the shape of the raised ridge along the front, hit my legs at a place that made it hard for me to sit longer than five or so minutes. To fix the problem, I made a cushion for my chair.

Ever since then, the choir president has been asking, "Where is my cushion?"

Finally I asked her what colors she wanted, and I have to say, fuchsia and yellow were not easy to find among music prints.

Last Wednesday I finished the assembling and embroidered her initial in the center, and passed the cushion to her during the Thursday evening practice. 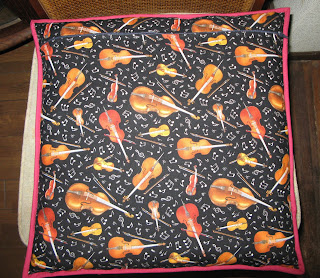 As she and her husband are both string players, I thought this bit of fabric worked well for the backing.


I think she took it home rather than placed it on her choir chair, but she was happy and said she was only joking about getting one.


This sixteen inch "Swoon" block I found on several blogs long ago and made a sketch on graph paper so the pattern was easy to draft.

There are a lot of set-in seams which take time and patience and the zipper was set in by hand.

The weekend included the Women's Conference, and with snow still falling on Friday morning, we took the train instead of driving. Too bad I had not prepared handwork for the train because the ride was long. Unfortunately, my sore throat turned into a cough and my voice was rather shot.

I started my regular week with onigiri delivery and school but now I am taking some down time, hoping my voice will recover in time for the Saturday valentine concert. I tried singing along with yutube and can get all my notes but the trick will be not to break into coughing.

I have yet to post on the Tokyo Dome show but both Tanya and Carin have made a number of lovely posts. I am thinking of going to their posts and eliminating duplicate pictures from my camera to see what I might have beyond what they have shown. For me, there is still the challenge of giving credit to those creative quilters whose names were printed only in Kanji. Only the "Teacher's" quilts had Roman letters included. This year I did not bother to fill out a questionnaire, as it appears  it is never read other than to get your address for sending you advertisements.
Posted by Julie Fukuda at 9:04 PM