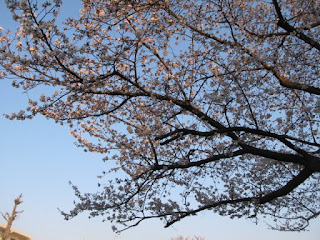 Morning walks with Nikko take me past the kindergarten at the end of the street.

Along the borders of the playground are a few cherry trees. Though the cherries downtown are in full bloom, these have just begun to open in the morning sun.

In the bottom left corner is a highly pruned gingko. It will be one of the last to show it's leaves. There are about five or six of those in a row along the border and they will be pretty in the fall, then pruned again. 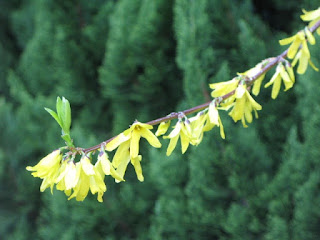 The walk takes us through one of the parks.

They remind me of my childhood home in Ohio, where we had about 8 of these big bushes in different parts of our spacious garden.

These, and the star magnolias, were some of the first plantings to bloom

And, speaking of magnolias, This winter the pruning team left the magnolias near here alone. 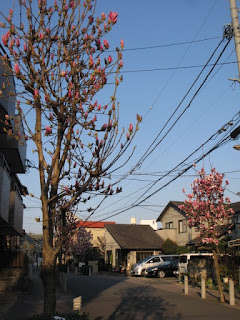 The row along the north side of the street bloom first, as they get more hours of full sun.

The ones on the south side have just started to open about a week later. (the tree on the left)

The trees line both sides of this street, which is along my walk to the train station. Each year they begin to bloom from the eastern end of the street ... one by one. When the last tree in the line has displayed it's flowers, the south side starts it's parade.

When these are finished, the dogwoods will start to bloom. But there won't be many blooms this year because the pruning team trimmed off the buds in the fall. 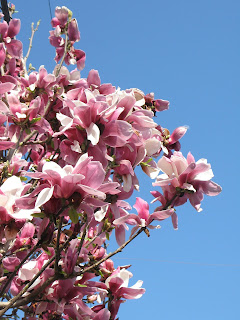 This is a closer shot of the tree on the right.


There are a few smaller buds along some of the branches and they usually bloom during the summer, however are hard to see because by then, the leaves are gigantic.


After weeks of cold and rain, this blue sky is a welcome sight. 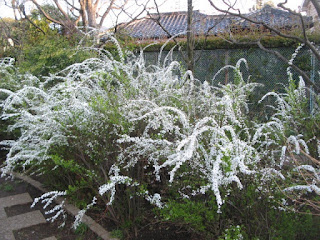 Here are more blooms in the same park.

In my home garden we had these too.

Both "Bridal wreath" and "Babies breath" but I can't remember which is which. One has flowers in clusters but these are like beads on a wire. 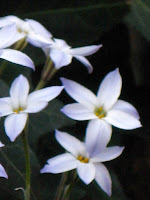 Grape hyacinth have opened in the pots along my wall  and these little bulbs are volunteers along the walk.
Some are all white but these have a slightly purple tinge to the petals.

I don't know what they are but they are very hardy. The picture is a bit out of focus but that is the only way I could get the purple to show.

Today was a school holiday for me and my challenge quilt has increased by another row of setting blocks and a row of crumb blocks, plus one half-finished block.

Tomorrow I will be meeting a good friend and blogging buddy who is in Japan for the week. Guess where we will go? 20 guesses and the first 19 don't count. We will be checking out some fabric and supplies in Kamata. Shall I take a little money with me just in case?

I need more fabric like I need a hole in my head! But then ... who knows what might jump off one of those shelves into my bag?
Posted by Julie Fukuda at 2:09 AM