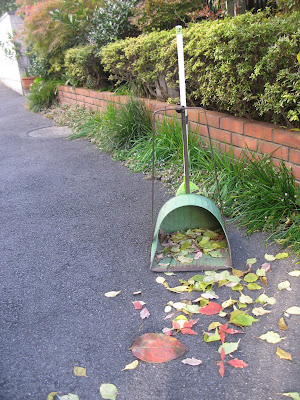 This morning's sweeping gleaned a few red leaves,
but that doesn't mean the whole tree got the message.

One colorful persimmon leaf from the neighbor's tree, and a few red bits from my vine-leafed maple...

The lace-leaf maple in the top left corner has a wee bit of pink tint in the top leaves, but hardly the showcase of former years.

The corner plum has contributed a few yellow leaves and the neighbor-to-the-south's Japanese maple is only dropping shrivelled brown leaves.

At least the sauna weather has been replaced by cooler days and cold nights.


Thanksgiving brought talks by facetime or phone with all my darling kids and grandkids. Norie and I had a nice lunch together to celebrate the day. Then we made a trip to the ward-office to gather up a few of the papers needed to claim what small social security payments might be available.

The week has been spent trying to solve the problem of someone putting screws into my back tires on my van. I at first thought it might have been an accident of driving over a nail. Then, on Saturday, at a scouting event, my tire went flat for a second time. My Scouting friends leapt to my aid and repaired my tire, and I was surprised to see that the object they removed was not a tack or nail, but a hardboard construction screw ... the kind put into walls with a power tool.

When I returned home and told my daughter, I learned that that was the same thing that had happened to the other back tire a few weeks before. The screws were both stuck in the center of the back tire, pushing in as the car drove along. I had been having some problems with the car being damaged while parked in the lot, and began to think about my former parking space.

That lot was owned by the owner of a construction company. At one point, they had called the police saying I had damaged their fence. Well, it was a very battered fence and none of the damage lined up with anything on my car, though I had a scrape on the bumper from a time at camp when the car slid on snow up against the curb. For that, I had statements from the two Scouters that pushed my car back on the road. The insurance company stepped in and the construction guy gave up ... but then the car was keyed. Pee and poop was put on my doors, and the fee was raised so we looked for a new spot a bit farther from home but cheaper.
It has been probably 8 years at our "new" spot with no problems. Then, the lot across the street from the parking lot gate became a construction site. Ever since that work began, there have been small issues of keying the doors, breaking the mirror cover, paint sanded off the fender, and now the second flat tire.

I talked to the police. They said they would check on patrol. Yeah, once a day check ....
Norie called the parking garage. No cameras ... too expensive, and no open spaces to move to....
The insurance company (a new one) can't do anything without increasing my insurance to above the price of the tires....
I wonder is the former guy has discovered my car ... not hard to identify, as it is a camping van, and within sight of the construction across the street. The workers do not seem to come to work by car, so may be local or even part of the former problem. Meanwhile, I am looking for a place to park until the problem is over. I talked with other drivers in my area and they have had no problems. I talked with the owner of the lot where the construction is being done, and told him what was going on.  I really don't need a problem to interfere with my sleep at night, so hopefully I will find a solution.

Meanwhile, the blocks on the big quilt are almost finished with the in-the-ditch quilting.

Choir practice for our "Choir Sunday" presentation is winding down with two more big practices left before our delivery. (And a big beautiful electric keyboard arrived from Ken for my birthday so I can check my pitch in the home practice.)

School goes on. Scouting goes on. And I am giving great thanks for my wonderful family and friends.
Posted by Julie Fukuda at 11:17 PM