A week of rain means progress on the feed sack quilt border.

I wanted to use some of the smaller feed sack scraps in the quilt and I thought an applique border would be a good way to do it.

This is the first long border, now all stitched and ready to add to the quilt.

I have begun selecting flower petals for the second long border and once they are in place, I will add the vines and leaves.

The top and bottom borders will also have flowers and I am thinking of adding a butterfly to each corner. Somewhere I saw a picture of a vintage quilt with butterflies made from feed sack fabrics. I think I made a sketch of the design but have yet to find which book I sketched it in.
Well, there is still time to find it as that will come at the end of the last borders.

Tuesday, while basting flower petals, I watched the enthronement ceremony of the new emperor on TV.

It was very serious and formal, and just as the deep purple curtains of the canopied throne were being pulled apart to reveal him in all his glory, the rain that had been falling for days came to a halt.

Then, a bit later, as he unfolded and began to read the written proclamation of his ascension, the sky turned a bright blue with the sun shining through my curtains.
I heard from a friend that he had seen a rainbow along with the sun.

The rain has now returned in force, but it was nice to have an opportunity to air my bedding in the sun and hang my wash.

I am wondering how the weather went so suddenly from a sauna to sitting indoors in a light down jacket. The dogwood trees in the park are dropping bright red leaves but others have yet to turn color. 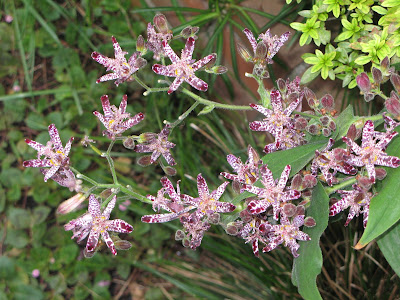 The Hototogisu, named after the spotted Little Cuckoo, has begun to bloom in the front hedge and along the garden path.

In english it is called Hairy Toad Lily. The best part of this flower, beyond its beauty, is it is fine with excess shade and thrives on neglect.

This one has come up amid the azalea bushes along the west side of the house, making up for the lack of blooms (only one flower along the whole length of hedge) this year.

Tomorrow we will fill our rainy day time with a visit from the "Cookie Fairy". The expected produce to be Halloween cookies. Whoever would have thought Japan would have embraced that holiday!!!
Certainly, it was unheard of years ago, and even when my own kids were young, we could actually enjoy a meal without having to jump up and run to the door for trick-or-treaters.
Posted by Julie Fukuda at 9:47 PM