Just a little over three weeks from start to finish, this must be one of the quickest quilts in the collection.  It was on August second that our congregation voted on the choice of a new associate pastor. and the following day I heard he had a two year old son they were thinking of sending to a Japanese pre-school so he could learn Japanese.

That gave me the idea of the I-Spy. The basting went well on the 18th, even though the room was very hot and humid. Because I used #60 thinsulate, it rolled out smoothly over the flimsy back with all seams lying nicely. The "gifted" backing was just the right width, so didn't need to be pieced. I pin basted it and when I flipped it over, everything was fine and no adjustment needed. 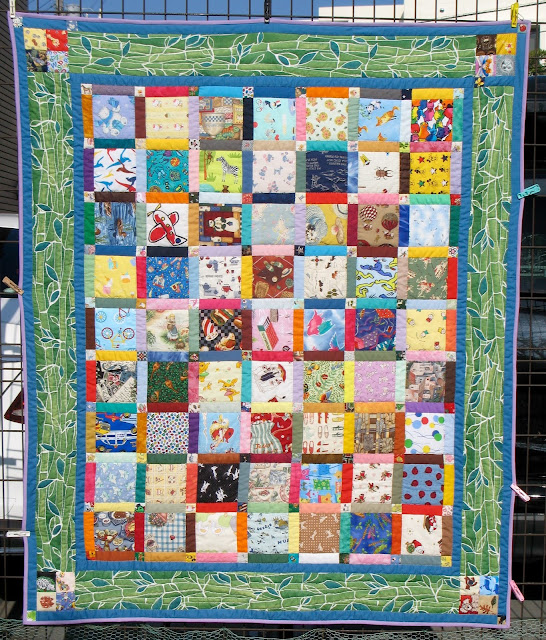 Carrying things back, arms full, I slipped on the stairs at the bottom and hit my knee and toe.
Ouch! The knee wasn't that bad but I got out an ice pack for my toe. By the middle of the afternoon, though I was pretty sure it was not broken, I decided to go to the clinic for a check. 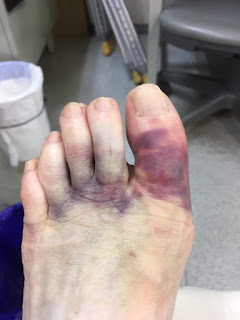 No, it wasn't broken this time. Actually it had been broken in the past and grown back stronger than before. Still, it was getting swollen and the color was spreading over the whole foot,
They put a cast on it and it has been getting regular ultrasonic treatment daily. The purple color has spread over a good part of the foot and all the toes. The cast made walking easier and has now been removed.

I have had plenty of time to sit and quilt. The blocks are all quilted in the ditch. Thinsulate will not shift as it is made for wearables, so within four inches is enough. I quilted the bamboo print in the border along most of the white lines. It gives it a nice texture.

The finished size is 49" x 59", good size to toss over a napping child but really not enough to tuck in on a single bed. I had been thinking something to toss over the back of a sofa, ready to play or use.

I still have the game to work on and have been making a list of nouns, verbs, adjectives, and numbers that can be combined in a game. I had been thinking of cards, but another idea might be a notebook with folded pages having english on one side and japanese on the other.  With restrictions on travel, it will be some time before this quilt can meet up with its new owners.

Now I am dithering over what to work on next. The houses are gathering into neighborhoods and the log cabin is waiting for decisions as to what it wants to become. Down the road is a big girl quilt for my eldest granddaughter. (I have an idea for a Hawaiian quilt ... her choice ... but would like to get a large piece of fabric, dyed from yellow to blue. I have seen that in some Hawaiian quilts and think it would be nice for the design.) I also need to put together a kotatsu cover for Norie's family and I have Marie's name for a Christmas gift.

I know I am getting more done while in lockdown, but my motivation has declined in the heat and humidity. I began turning on the AC in the afternoons a few weeks ago but the electric bill shot up to the moon this month. Good thing I'm not made of butter!