Now 80 inches square, I am wondering how many borders I will need to add to get the right size. I am thinking of a narrow border of bright pink and then just adding enough of the same blue floral used in the center sashing. Several of the darker blue blocks around the edge might not have enough contrast with the sashing I used in the middle. I also have enough of the red floral that I used as sashing on the Coronaville pieces. There is none of that fabric in this quilt so it might work as a plan B. 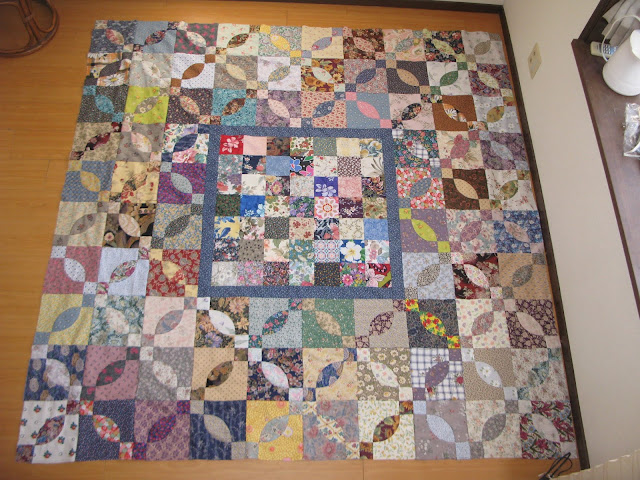 This is pretty well filling up most of the room. When it comes to doing the backing and basting I may have to find somewhere else to work. 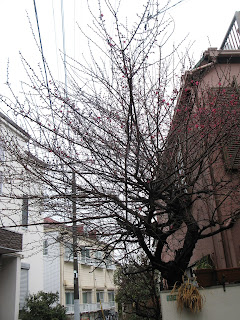 in 1965, we planted this plum tree to celebrate the birth of our first daughter.

Almost every year, it has bloomed on her birthday, the 15th.

This year I kept watching for signs of color but it didn't look likely it would have flowers opening any time soon. 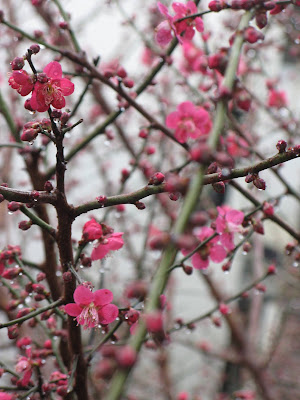 Yesterday, it was dark and rainy, so I went to the second floor and opened the shoji to see if there might be a few blooms on the upper branches that get a bit more sun.

I think this year has set a record for buds, and, sure enough, some of the upper branches had begun to bloom.

I took up my pruning shears and cut a few of the branches that were against the house, and arranged them in a vase next to Paul's ashes.

I have found a gardener who understands why I did not want to cut the branches during the fall pruning season. Last year the tree produced many plums (actually like small apricots) for the first time. Maybe this year there will be enough to make some plum wine.

The recent earthquake was only an interruption of sleep in this part of Tokyo. The grandfather clock stopped but nothing fell from the many shelves.

This coming weekend I look forward to the Women's Conference. Though rather tired of meetings on zoom, I am hopeful to find a few friends there, whom I have not seen for quite a while. One of the good things about zoom is that I can do piecing with my hands while meetings are going on....