2022 will be the 150th anniversary of Tokyo Union Church.

Nine years ago, when we celebrated out 140th anniversary, I set up a table with four inch strips, some one inch wide and some two inches wide, and fabric markers for those attending to sign their names or a message.  My plan was to create a banner in celebration of next year's anniversary.

Time has flown, and I need to get this banner in progress. My original idea was to use the white strips to form a trellis, applique flowers above and around and the words "150 Years and Still Growing". I have more or less given up on that idea after trying to combine the two different sizes of white strips. 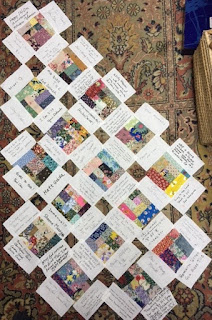 I made random floral pieced blocks to separate the strips. Since the wider strips have more writing, I thought those would be better placed at the bottom, therefore easier to read.

At that time I was thinking of maybe light gray cornerstones between blocks. 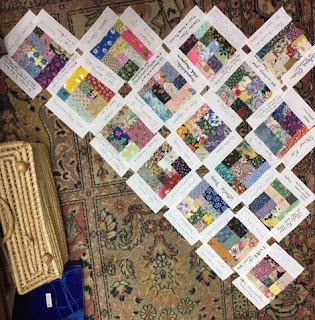 I laid those out on my carpet to get an  idea of how they would look in the upper corner.
Then, everything kind of ground to a halt while I dither over where to go from here. 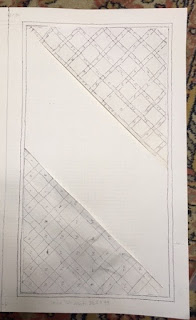 I drafted the idea on graph paper to get an idea of how this might go together.

I can picture a large sunflower and vines or other flowers against a light blue for the sky and the words at an angle. Maybe use the sky blue in the binding?

I still have not begun sewing the corner areas because I haven't decided what to put in those little squares.

Then, this week, while scrolling through blogs, I noticed that Susan Snooks, Patchwork n Play,  had made pieced blocks for a project she is working on, and arranged the scraps by color.

The more I thought about it, the more I thought those would be better to use than the random ones I have made. Saturday I laid out some of my cut scraps with closer colors, and I have been sewing those together. 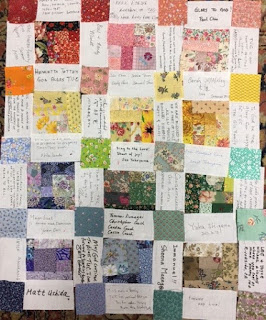 Here they are laid out in a square pattern, and I definitely think this is less distracting than the random pieces.

I could grade them up from the bottom to meet the blue sky strip running through the center. Just to check, I laid out some two-inch squares in the corner area. Maybe better than using gray ...? 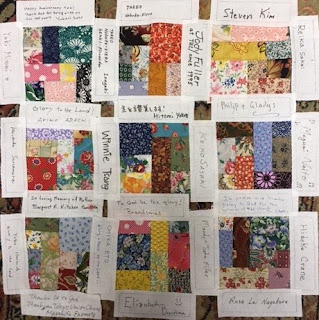 Maybe I could use the random floral blocks in the upper area with the one-inch strips...

Those could use floral cornerstones as well.

I really wish I could decide this basic part of the banner so I could move along.

I am planning to add strips of both two and one inch as piano keys separated by floral strips. in the border for members who were not here nine years ago to sign.

I do not have a deadline as to when the celebration will be, but I prefer not to have to do a lot of last minute work. Finishing early and adding detail is more to my liking.  Before adding the words, I will probably run my idea past some friends at TUC.

For now, I am open to suggestions.