Three works in progress wanting my attention. The anniversary banner can be moved until next year if needed, The big girl quilt is waiting for me to find matching fabric, enough to make the side triangles for the star. I really don't want to buy any more and am still sorting through dark blue scraps, wondering how close is close enough. The third project is the stewardship banner. Since the rest of the members of committee don't sew, they seem to think it can be thrown together in a matter of days. Still waiting on the committee for input, I decided to escape.

Last Saturday I met up with Cynthia Nanto of wabi-sabi quilts, to check out the spinoff from the Tokyo Dome show. What a lot of walking just to get inside! There were a few exhibits from assorted well known craft people. Knit and crochet, embroidery, boro, Kathy Nakajima's quilts, and the partnership quilts to which Cynthia and I and friends had contributed blocks. It took a lot of hunting before we found Cynthia's block. Then, looked through the rest on display, finding nothing familiar, and then coming back along the display wall to find my cardinal in the same quilt as Cynthia's.  I had left my dead cell phone at home, but Cynthia got some nice pictures. We split up for half an hour to check out the many crowded shops, and came back together for a little snack before parting.

I thought I had had enough walking for the day, but getting home and seeing there was a bit more to the day, I took my cell phone and walked into Nerima to visit the AU store, hoping maybe they could find the problem and get it to work. Oh No... You have to take it to the Apple store! Just because they sold me the phone does not mean they carry batteries and cords and things like that.

Nearest apple store was in Shibuya near the church. Well, it isn't closed yet and I really need the phone in case of an emergency, so I headed off. two trains away to the apple store. Of course one had to wait in a line outside the store. Then the guy came over to see what I wanted ... tried to check ... needed a password, oops, I left my computer notebook at home. Tried two passwords, and then had to change that password again. Then he wanted a credit card. oops .. no one I could use there, so finally I was lead to the basement where there was a lovely English-speaking young lady who helped sort everything out. In the end, I didn't need a battery but I bought a new cord. Of course when I got home and opened the box, there was no little cube to plug into the electric socket. AND... by then, the trains were too crammed to get a seat! 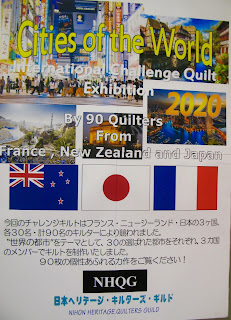 After taking a week to recover, I was invited to another show. The first part of the exhibit were these picture quilts made by quilters from France, New Zealand, and Japan. This exhibit travels around the world and had just come to Japan.
Usually it is shown at the Yokohama quilt show, and when that was cancelled, at the Tokyo Dome. Now that those two no longer exist, It was in the "Pin Cushion" show, and I had been invited by Ueno-san who is part of that group. We were lucky to get to meet up there, as she had to travel from out of town and the location was new to me.
It was so nice to see the display with the descriptions both in English and Japanese. Other quilt shows might learn a lesson from that. 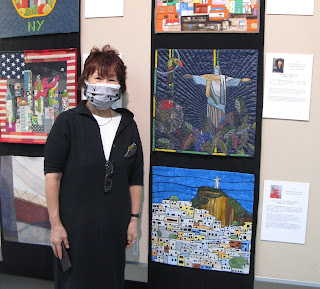 Here is a picture of my friend with her picture representing Rio.

There were a number of different countries represented in the hangings. Here are some more...It seems Hokkaido was one of the topics. 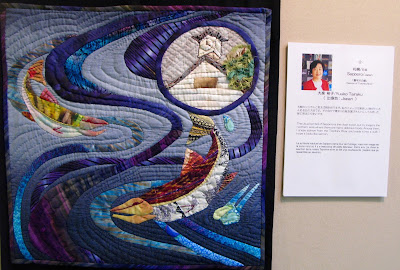 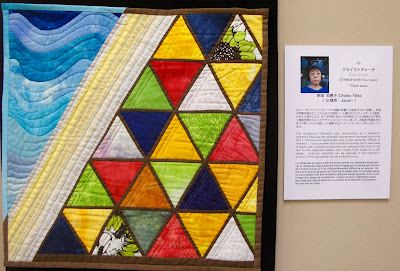 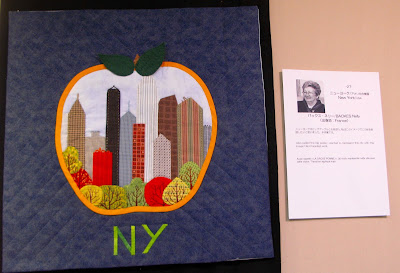 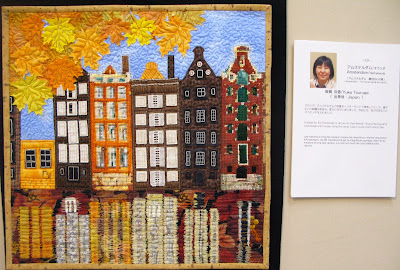 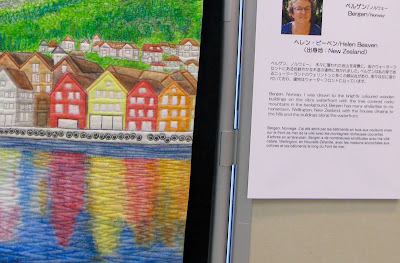 I was particularly impressed with the way this quilter made the reflection in the water look so real. 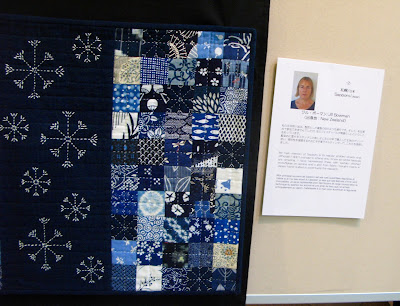 Does this look like Hokkaido? The quilter managed to get hold of quite a few Japanese fabrics. 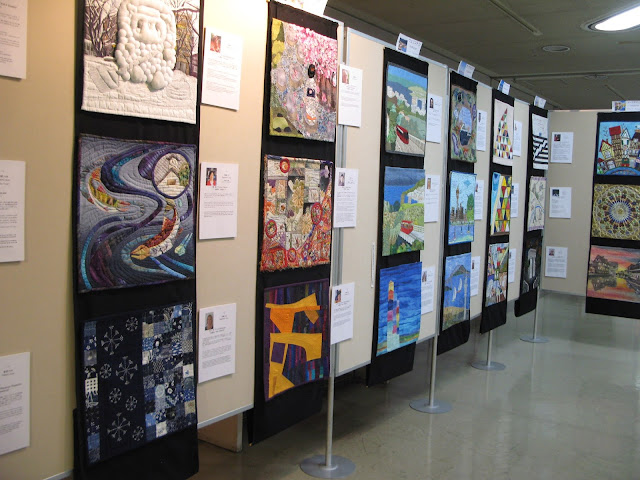 You can see there is a lot more of this show to display, but I had better stop here for now and get back to my stitching.
There was a lot of walking and the three trains I had to take to home were packed ... even on a Saturday.
No chance of getting to sit, even in the seats reserved for the elderly. At least my recovery day can be spent stitching.Tomorrow starts a new week, out at 4:am for onigiri delivery. Boredom is not a problem!
Posted by Julie Fukuda at 3:13 AM