This year started with a lot of zooming. On the first, I hurried home from church for a zoom gathering with my kids ... spread from the east coast to the west coast of the states, and across the pond to Japan.

On Monday the zooming was with church friends, spread from Malaysia to the eastern US, and Tuesday it was with cousins and nieces and nephews living in the states. While viewing the screens of squares and faces, I was reminded  of a nine-patch. I had been marking and cutting squares of a number of scraps, and sitting right at my right side were two tins of two-inch squares, so full of pieces that the lids wouldn't go on. I think Mr. Zoom was calling out for me to fix the problem,  so I began arranging and sewing blocks while zooming. Wednesday and Friday added more finishes.

I think usually, nine-patches have the darker squares in the center and corners. I began with the alternate setting, and when I laid them  out, I liked the results. making contrasting blocks would give a checkerboard effect, but I like the way this looks, 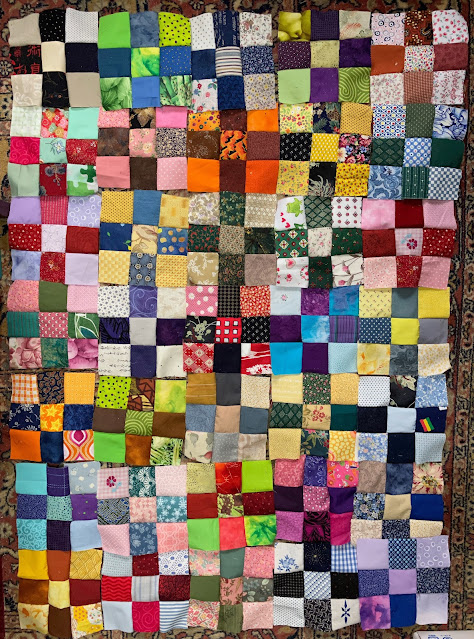 I have hardly made a dent in the number of blocks, still in those tins. I do have a few that probably would not work in a 9-patch, but might be nice set with solids in a border. I think that I will wait before sewing these all together in order to balance the colors.

Years ago, I gave up on new year's resolutions, and began picking a focus year for the year. Last year was "purpose", and I was wondering what to choose for this year, when the word chose me instead. Jan1st, as I headed off to church, a neighbor shouted out "Happy new year" in english, and as I was rushing home for the zoom date, another neighbor stopped while passing by on his bike, to give me a high-five and wishes in english. The overflowing of love from family and friends calls out for gratitude, which will be a fine focus for this year. 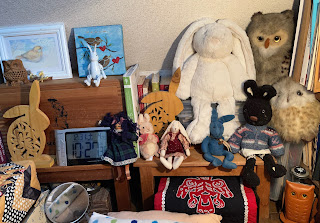 Cleaning out the dust bunnies from under the eves at the head of my futon, I made room for the bunnies and a few owls to enjoy the new year and the reminder they bring of friends past and present and happy events.

I hope my blogging friends will also enjoy a year full of happiness and gratitude.