Today is cold, dark, and rainy 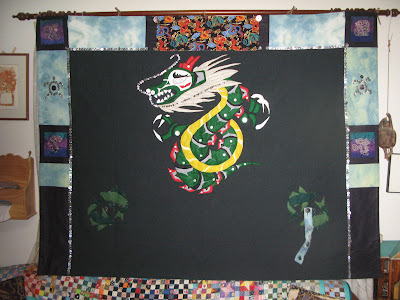 , a good day to wrap up in something warm and cozy. What I am showing you is not something I have made. It was presented to me at an Order of the Arrow conclave a few years ago.

The Order of the Arrow (or OA) is the National Honor Society of Scouting. It is made up of Scouts and Scouters who are nominated to the organization for "Walking the talk" or living the Scout oath in their daily lives. I was the first woman elected to the order in 1990 in the Far East Council (though the Lodges in the states had women for a number of years). I am the only female Vigil Honor member in our Lodge as well, and was the Lodge advisor for nearly six years.

For many years, our Lodge was part of the Western Region that included Alaska and Washington State. Each year the OA holds a conclave hosted by one of the Lodges in the area. I have been lucky to attend conclaves in both states and, during my tenure as advisor, the first youth members were able to attend from The FEC. The conclaves are usually held over a weekend and, with travel issues, means missing a day or two of school, thus not easy to attend even with donated airline tickets.

So, what about the blanket? One year I attended a conclave with our District Executive and during a silent auction, he bid on a button blanket without success. A plot then developed between myself and an OA member from Washington named Kathy Anderson, to create a button blanket specially for Derek, the DE. If you are interested, you can see it in the 2005 list of projects. The central crest represents the wearer's heritage. His was a beaver. (As he is of the Woodbadge beaver patrol), we discussed the elements to include and I was tasked with sewing on the buttons. The beaver is a typical NW totem. My blanket, however, is very unusual.

It came as a complete surprise a number of years later. I was called to the stage and presented with this lovely piece of work. It was explained to me that my totem, the owl, is never used as a main totem. (According to NW tradition, when the owl calls your name, your time has come). Instead, the blanket contains the dragon, which is the totem of the Achpateuny Lodge to which I belong. I love the dragon fabrics in the upper and side borders along with the blue that represents sky and sea. 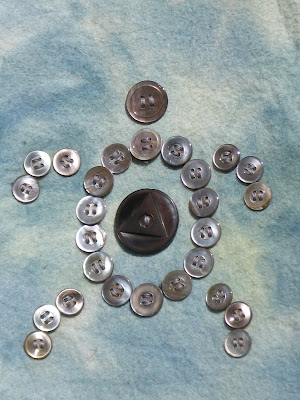 The buttons are abalone shell and on the sides you can see two turtles, the totem of my younger days, formed by buttons alone.
The triangle on the large button is the Vigil symbol. 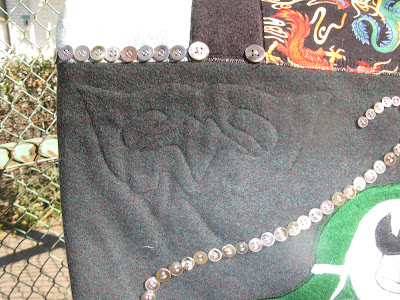 And on each shoulder, carefully hidden, are ghost owls. Though not the main totem, they are there hugging my shoulders on either side of the dragon. 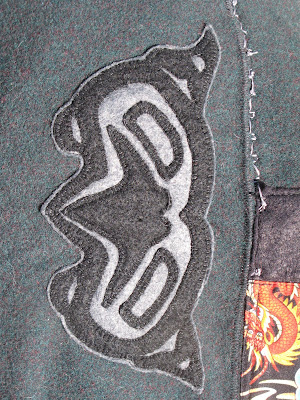 A peek inside shows how the owls have been added.

There are also loops inside for hands.

The dangling blue piece is for closing the front edges.

I never learned the story behind this presentation but I am certain Kathy Andersen was much involved.

A year later, our OA Lodge was switched to the part of the Western Region that includes Hawaii. I have not attended a conclave there as the dates have been the first days back to school for our youth.
We worked for so many years to build relations with our former Section and it is hard to figure out the advantages of the switch. Still, wrapped in my ceremonial button blanket, my heart and mind go back to my friends in the Great Northwest and I share not only this wonderful design but the joy of friendships that go far beyond the seas which not only separate us but also join us.