How anything that only lasts three days can be called a "Week" is beyond me. Then, again, I have had weeks that seem to past that fast. 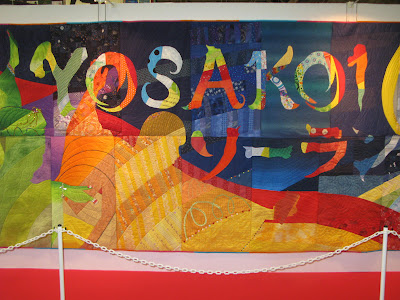 This is what greeted visitors at the entrance. Yosakoi-sooran is a form of group folk dance very popular in Japan. This is but a small portion of that large colorful hanging. 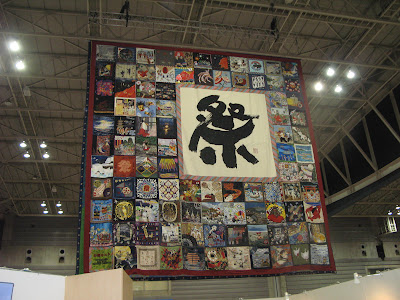 There must have been a festival theme because high in the rafters was this composit quilt. The Kanji is "Matsuri" or festival and many small quilts making up this giant hanging depict various festivals around the country. 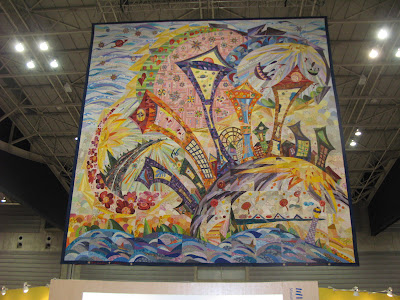 The reverse side was just as colorful. 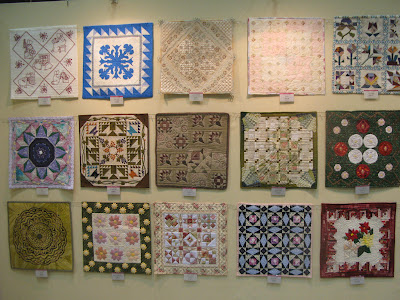 As usual in quilt shows I have attended, taking photos is limited to what is on the outer sides of walls to the main exhibits.

There was a display of small "theme" quilts. They do not seem to be a festival theme and I could not find any information on what the theme was. For a show that uses the word "international", there is not a great deal of information in other than Japanese. 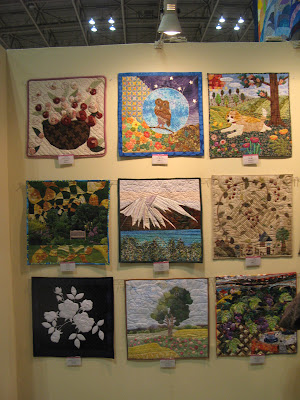 Some of these little quilts were quite charming. 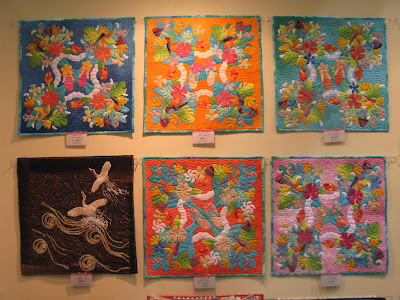 In addition to the show, and of course stalls, there were areas where workshops were being held. There was also a large selection of quilts that had been donated to quake relief and were being raffled or auctioned off. Considering the small size of many of those, it seemed like a good idea. Those donations had come from all around the world.
There were displays of Asian quilts. Usually there is a selection of Korean quilts but this year other countries were also included. There were lectures and talks being given by both Japanese and foreigners with interpreters.
I had a nice conversation with a lovely Hawaiian quilter named Mary Cesar. She had a display of beautiful Hawaiian quilts and has a newly published book of her own designs. I hope to see her next winter at the Tokyo Dome show. 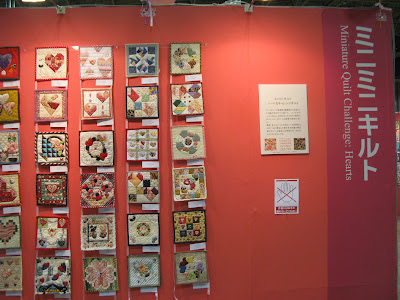 As last year, the halls were filled with miniature quilts on a theme of "hearts".


I think I liked the variety of last years theme of "houses" a bit better. 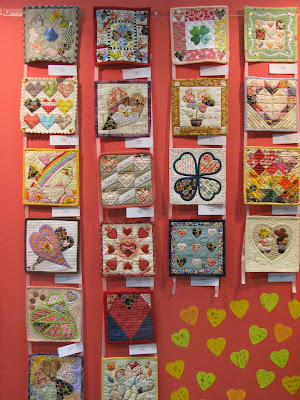 And, while this has been a VERY BUSY WEEK, straining to fit in all the activities I am involved in, rice project, auction quilt, visit from overseas friend, choir practice, Scout Leaders' meeting, Cub Pack meeting, Cub Leaders Pow Wow (advanced leader training), squeezing in a peek at the quilt show, Church and travelling hours between each thing,..... 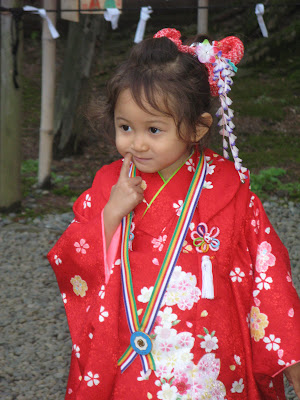 Sunday afternoon was a special day with just family.(well, extended family), as my little granddaughter celebrated her "Shichi-go-san" (7,5,3 celebration for girls 3 and 7 and boys 5)
With two sets of grandparents, parents, and great-aunt we set out to a shrine where she received a blessing and a big stick of candy in a long bag.

We tried to find the kimono worn by my four girls but forty some years and three moves foiled those plans. All I could come up with was the hair decoration they all wore.
Then, on a sugar high from that long candy stick, we tried to get pictures. I have determined the only way would be to take a video and then sort the pictures frame by frame. We tried the tripod for a group picture but it is hard for that flashing camera to know when everyone is looking in the same direction,let alone smiling!
Tea and a lovely meal together in a traditional setting ended the week on a happy note. Sharing this special time is both sweet and a bit sad because so much of the family is so far away but for one day we enjoyed what we had.

It was a great way to end the very busy week and begin another.
Posted by Julie Fukuda at 8:50 PM