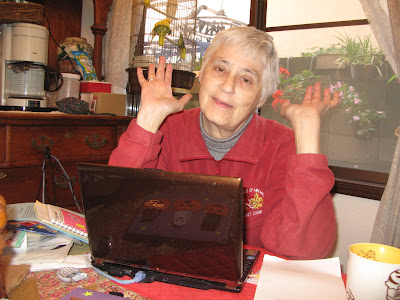 Why do I have to be a computer guru to have a quilting blog?

My dashboard can no longer be accessed. That is where I go to read blogs I follow. I get a message that I should add Google Chrome but my computer won't let me do that. So now what? Am I the only one with these problems?

As if I didn't already know that I am OLD and not too hip, tomorrow I have to take another OLD AGE driving test. At this point I have become not only old but DANGEROUS. I must get stickers for the front and back of my car to warn the public of that fact.

I did this exercise at 70 so it is not a new thing. I must pay to go to a driving school. There I sit in a lecture about how the statistics show that old people are involved in more accidents. Of course, those statistics also include old people who are passengers on cars (because they aren't allowed to drive) and old people who are hit by cars walking or riding bikes or driving) Forget the fact that this is an aging population so there are just more old people to get in trouble.

The last school had a machine to test your reaction time. It was a cartoon TV screen showing a street with cars parked on each side. A guy in a red shirt popped out between the cars, at which time you had to hit the breaks as fast as possible. Trouble was, the accelerator was only set at off and on. No adjustment of speed was possible. I would never be driving down a street that was one car wide with cars parked on both sides at 40k in the first place. The tester did not like the fact that I kept taking my foot off the gas and making the video stop.

Then there is an eye test. I already went and had my glasses adjusted for the occasion.

Then there is a fake driving course. You can not drive in your own car. That would be just too easy for an old person to drive something they are familiar with. You must drive the school's car over a fake course winding around something that looks like a kiddie course. Other than the fact it is in a strange car, that part is no problem. No trucks or traffic, just follow the yellow brick road, so to speak.

One of my friends said, "Don't worry, my mother passed the test and did perfect on the memory test", Memory test? I'm going to have to memorize something in Japanese? Don't worry?

So, now that my computer will no longer allow me the distraction of reading other blogs, I guess I will just have to sit and cut fabric scraps and try not to worry (and start feeling my age)!
Posted by Julie Fukuda at 4:44 PM

Email ThisBlogThis!Share to TwitterShare to FacebookShare to Pinterest
Labels: blogging