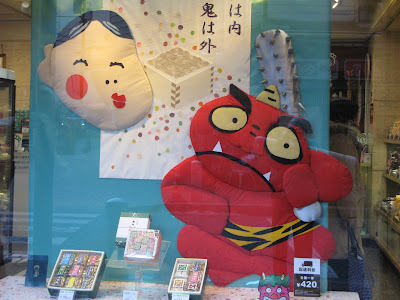 The first Monday in February was not really a holiday ... as in "day off" but was celebrated by households throughout Japan.

The traditional first day of Spring by one of those ancient solar calendars, is a day for scattering beans (mamemaki) for dispelling demons and welcoming good luck. 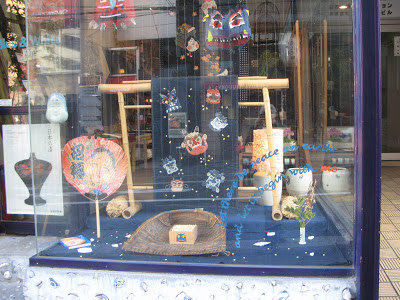 You can see the shop window at "Blue and White" also got on the mood for the festival.

On Setsubun, beans ... usually roasted soy beans... are tossed out the opened doors, shouting "Oni wa soto", then into the house, crying "Fuku wa uchi".
(Out with the demons! In with good luck!).

My kids had a big laugh over this because O-niwa (the honorable garden) is outside, sure enough. And our home was full of "Fuku", eight of us to be exact. 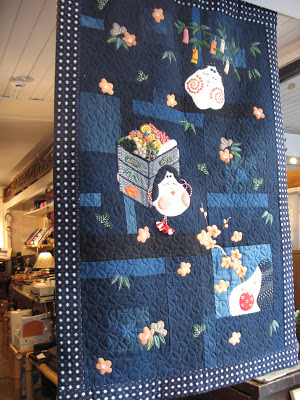 This lovely quilt was hanging in the window as part of the celebration. Made by Reiko Okunushi.

This traditional face of Lady Luck can also be found in a traditional New Years game of "Fuku warai", kind of the Japanese version of pin the tail on the donkey.

Players take the face parts and try to place them while blindfolded.

The stacked boxes contain beans and I hear it is tradition to eat the number of beans, one for each year of age.

I reckon "tradition" is a mistake that has been allowed to happen more than once, and they no longer put that many beans in one container so only Nikko ran around sniffing out the tossed beans.

There is also something about eating a super-big sushi roll while facing South by South-east. Paul and Nikko took care of that one too.

Yesterday was a real holiday ... as in "Day off". In truth, that is all it was. The origin was in the traditional lunar calendar when the Emperor Jimmu ascended to the throne on the first day of the first month.

It was designated as a national holiday during the Meiji era when Japan switched to the Gregorian calendar.
Originally called "Kigensetsu", it was intended to bolster the legitimacy of the imperial family over the Tokugawa Shogunate, and was a major holiday.

The holiday was abolished following World War ll. Ironically the day General MacArthur approved the draft of the model Constitution in 1946.

In 1966 it was re-established as a holiday but now watered down to a day to hang out the flag and reflect on the meaning of Japanese citizenship. Sorry, Nikko, no beans! 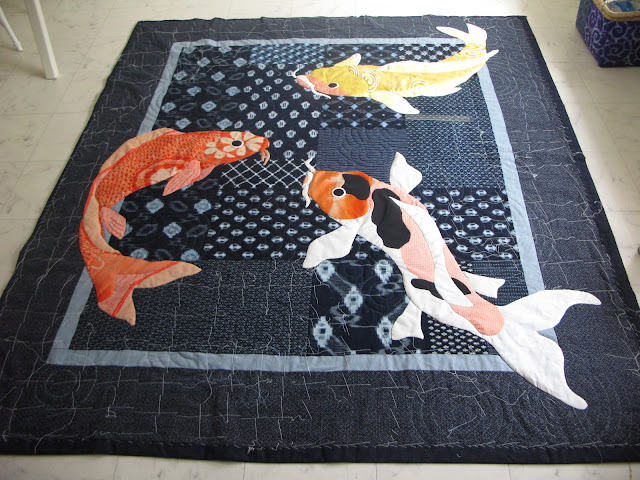 The carp quilt is moving along. I was glad for a few quiet days to work on the fish and the inner water circles. We have only a few more weeks to get this finished. I planned to get the center mostly quilted so that the group can work around the edges. Today the lovely ladies got a lot done and we had to lay it out on the floor and mark some more circles.

The good thing about those karisma white lead pencils is that they mark very accurately and the chalk disappears as it is quilted. The bad part is that the markings get lighter and lighter while working and often have to be re-drawn.

No more holidays coming up this month and the fish and I will be battling it out until we meet again next week. 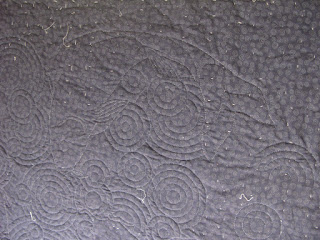 Here is a look at the back side. It looks pretty good for a group effort. I hope we can keep up the momentum.
Posted by Julie Fukuda at 3:07 AM