Although it has been nearly a week since viewing the "Tokyo International Great Quilt Festival 2015" with my two dear friends, I have yet to get organized enough to make a post. Now that I have seen their lovely posts, I am not sure I have much to add. 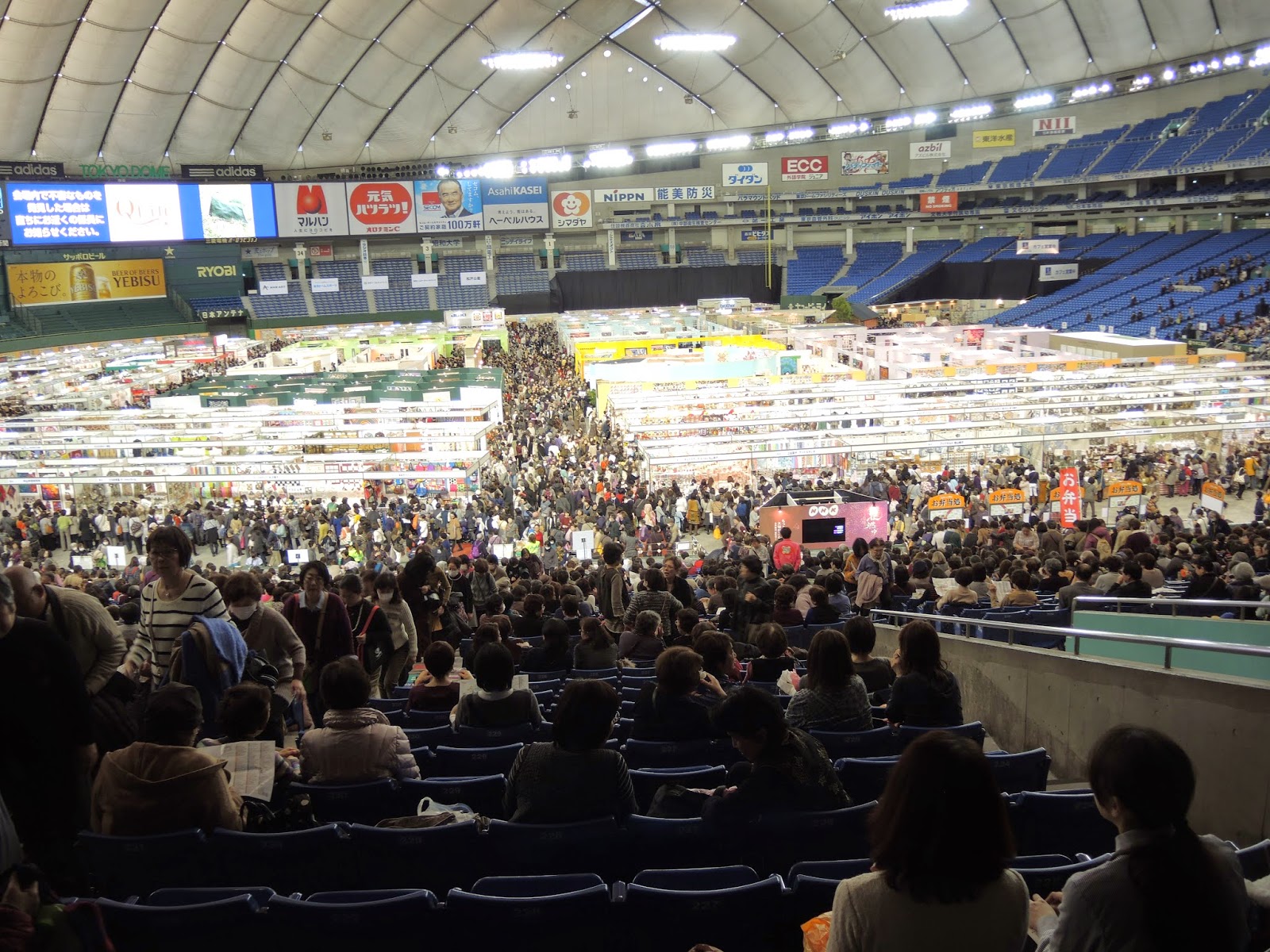 These are the throngs of viewers that met us at the entrance. Even when you have a viewing plan, it is hard to wend your way through that sea of bodies.

Tanya, Carin, and I had all submitted blocks for the "Partnership" quilts so we decided to head over there and check those out first.

Both Carin and Tanya have posted some lovely photos ... in fact, a lot better than anything on my camera. For some reason, the pictures I took seem rather dull. My camera has been used by other family members and the settings  ... which I don't understand ... may have been messed up. I hope you will check out their posts and enjoy what they have to relate. 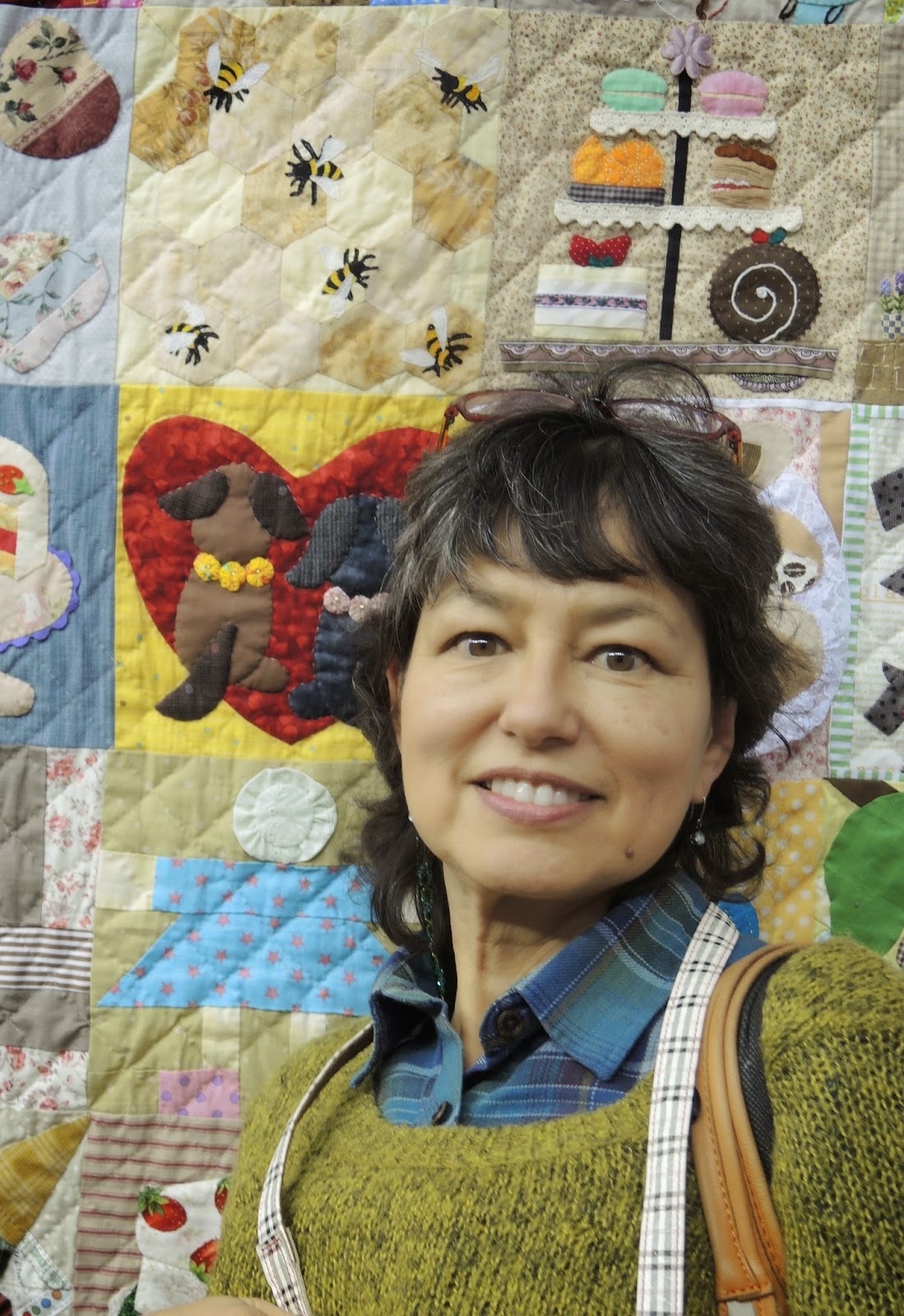 The subject of the partnership blocks was "Sweet".

Everyone could make a block with their own interpretation of that word and there was an interesting variety ranging from candy and cakes to cute animals.

Here is Tanya just below her block, six bees on a honeycomb.
Now, that aught to be sweet!

In fact, there appeared to be some class blocks that featured bees and honey. 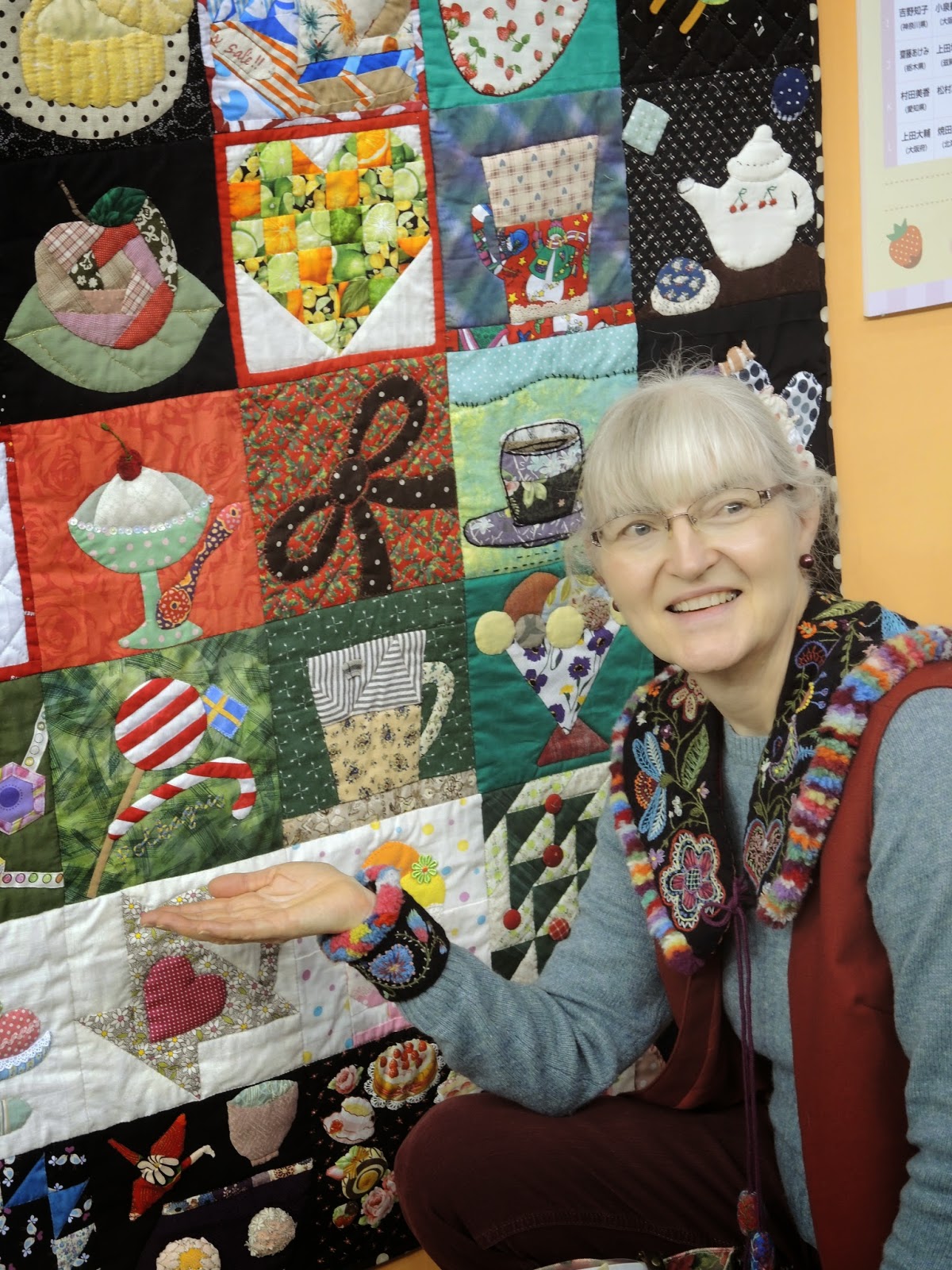 Carin's choice of sweets was some Swedish, or should I say sweetish treats? 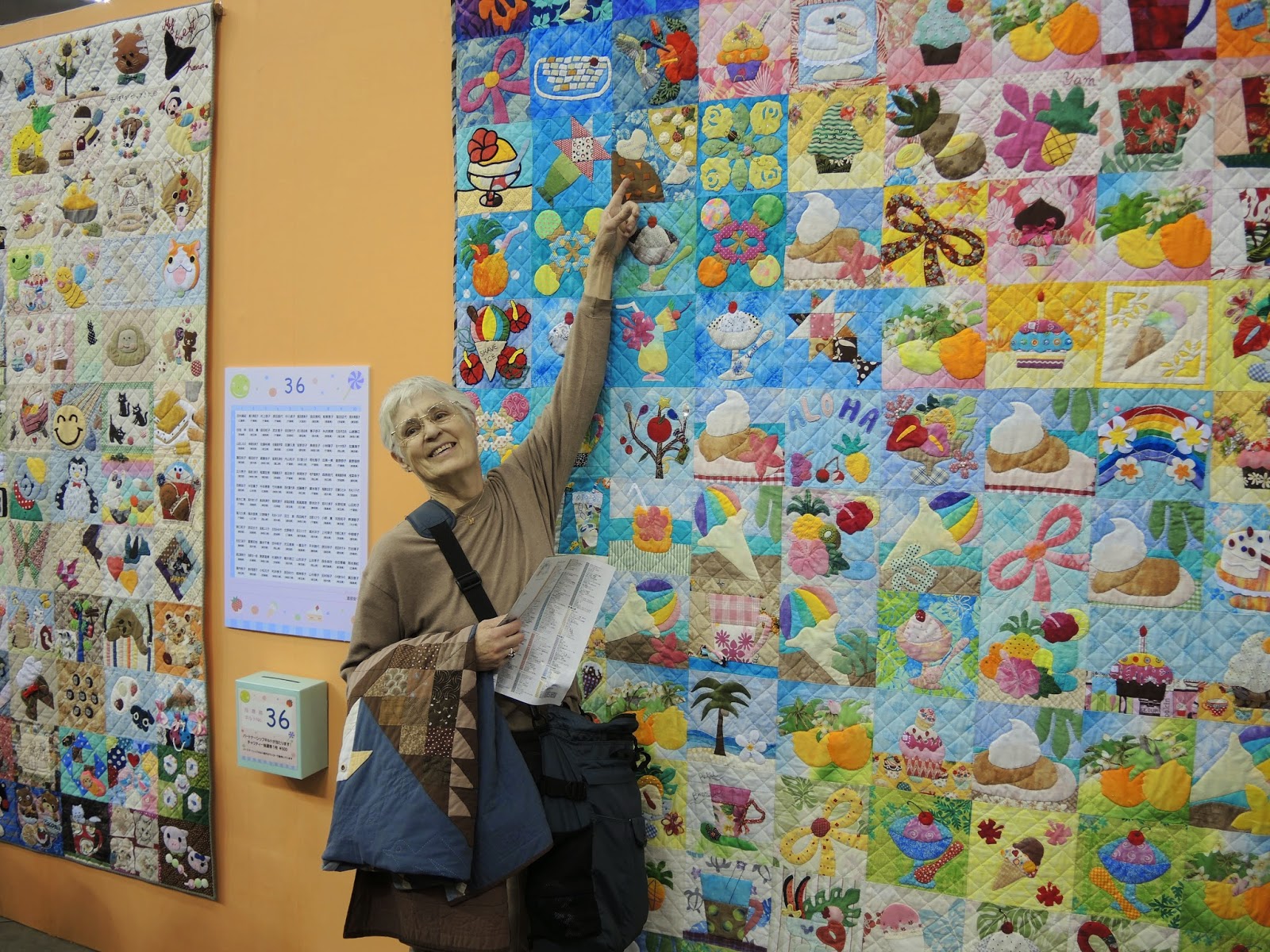 Even my gorilla arms were not long enough to reach my hummingbird block near the top of this group of 120 blocks.

I can't imagine the work it must have taken to make 69 of these huge quilts......

Arranging 8280 small blocks into some semblance of order, sewing them all together without mixing them up, then quilting them by hand ... Yes, they were hand quilted. 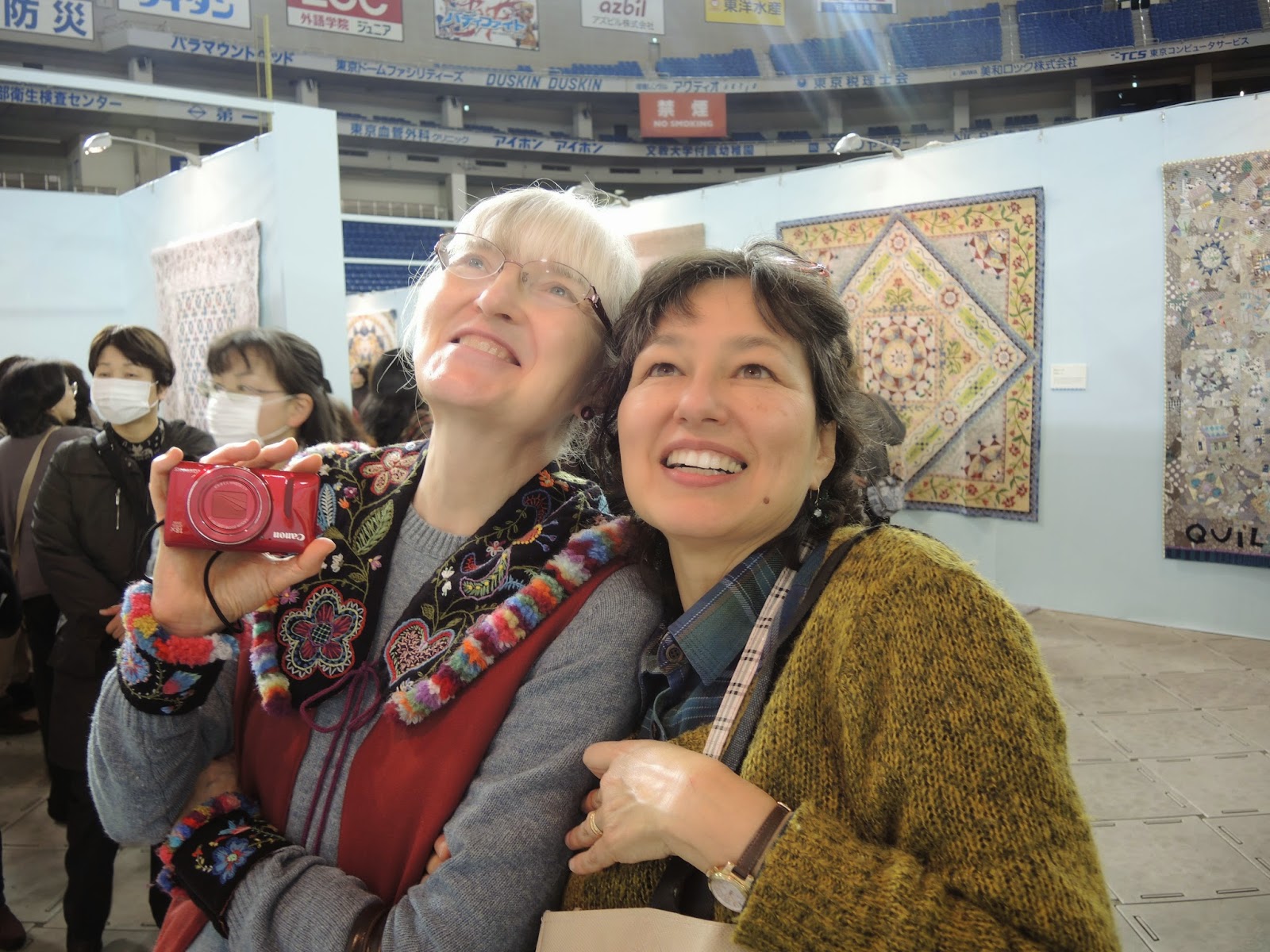 The best part of the show for me was spending the day with these two friends.

Sometimes when you go to a show in a group you see less than you might going alone but we each noticed different things and in our case three sets of eyes caused each to see that much more.

Though we communicate through our blogs regularly, getting together in person was a special treat we looked forward to with great anticipation. The warmth of that day will stay with me for a long time. How blessed I am to have friends like these!

Each year at the exit, there is a survey ... or questionnaire  that can be filled out. I have filled it out now every year both in English and Japanese and my biggest issue with this show is the lack of English. The Yokohama show has at last begun putting the quilter's names in English but at this show, none of the entries in the various categories had names in other than kanji, unless they were entered by foreigners... and there were very few of those.

Every Japanese who can write their name, knows how to write it in Roman letters and being able to understand the meaning of Kanji characters does not mean one knows how that name is actually said. Even written with Japanese characters, my granddaughter might be called Reya rather than Leya.
Today I down-loaded my pictures to my computer, I have taken pictures of the posted titles and names of the quilt artists but It will take some time to decipher the names to give credit.

There were several displays that did use name of the quilter in English. One was a selection of quilted illustrations of popular children's books. I guess a children's librarian might take notice. (These were in addition to the theme, Laura Ingles Wilder "Little House" books. 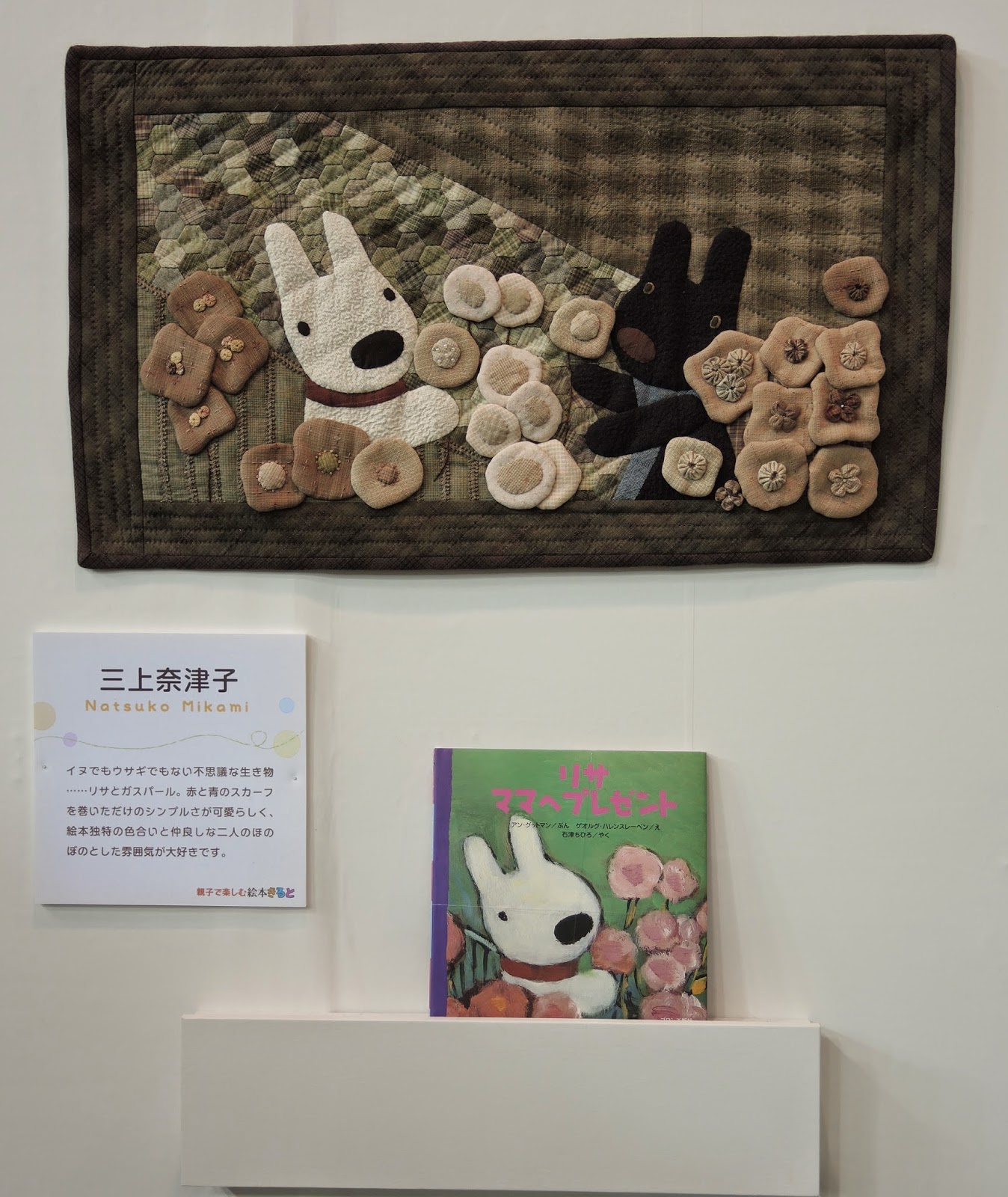 This is a popular Japanese children's book.


There is short comment below her name on the label and a copy of the book on display. 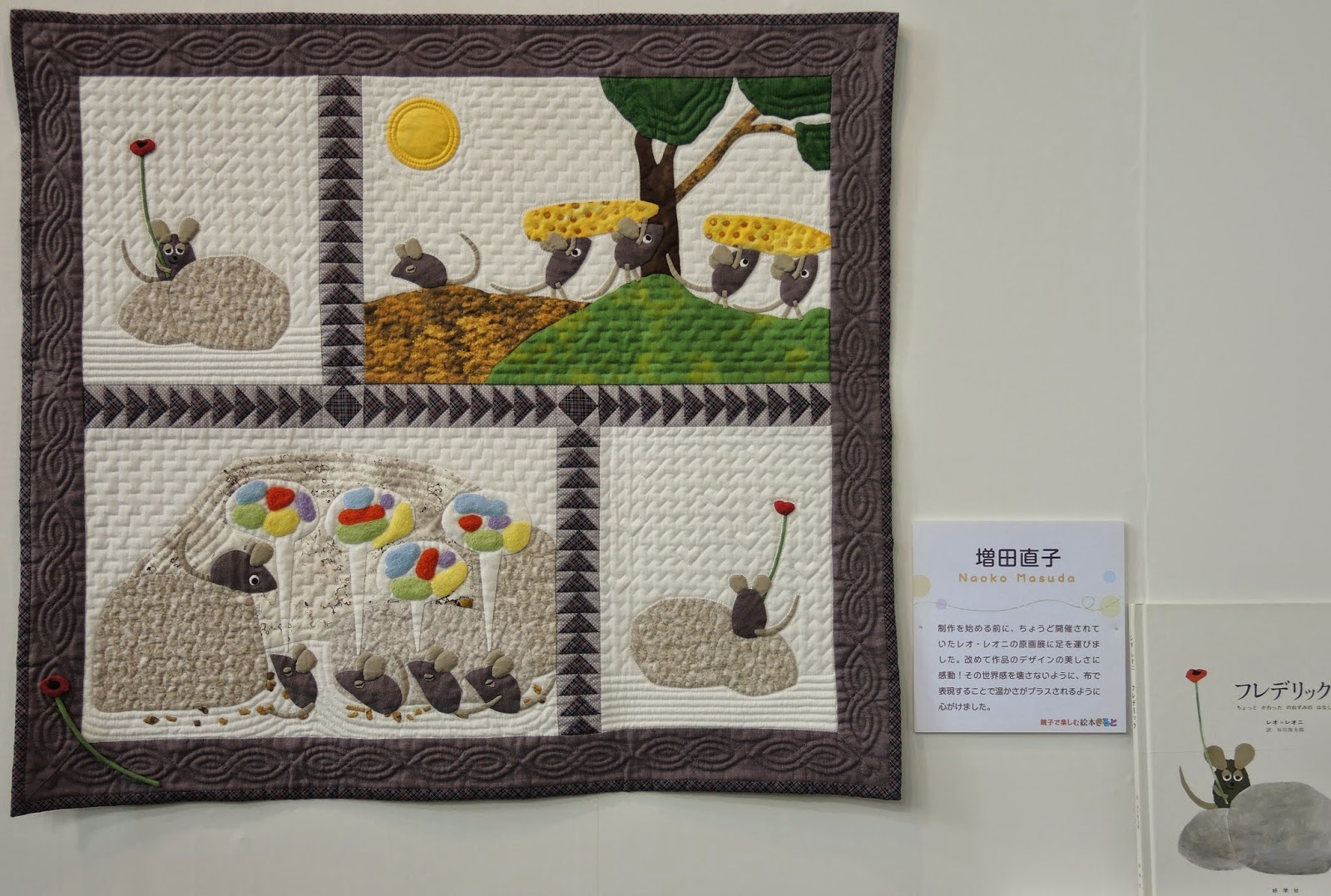 Naoko Masuda has taken some illustrations from this book about mice. 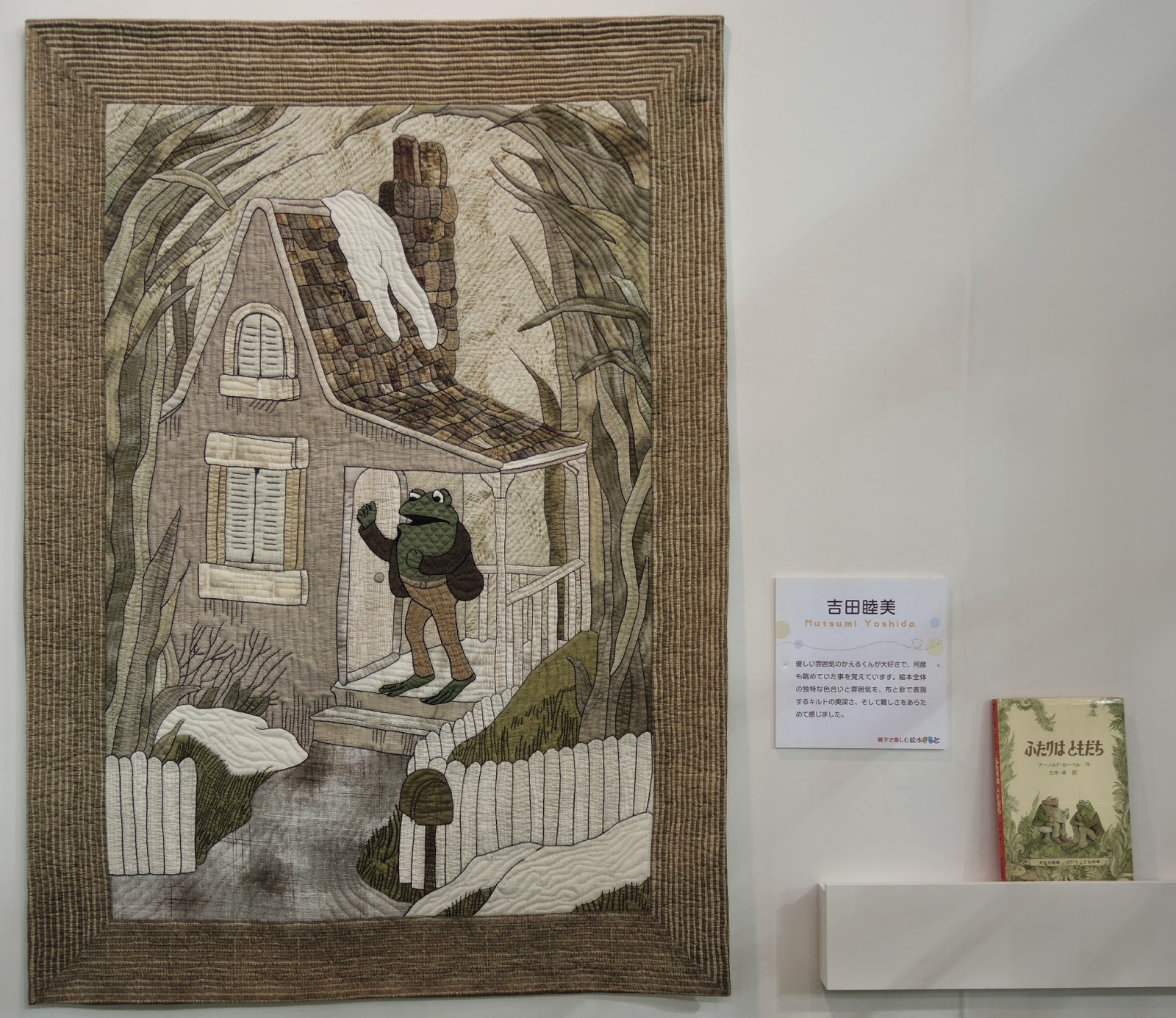 And Mutsumi Yoshida has illustrated the Japanese version of "Frog and Toad are friends". 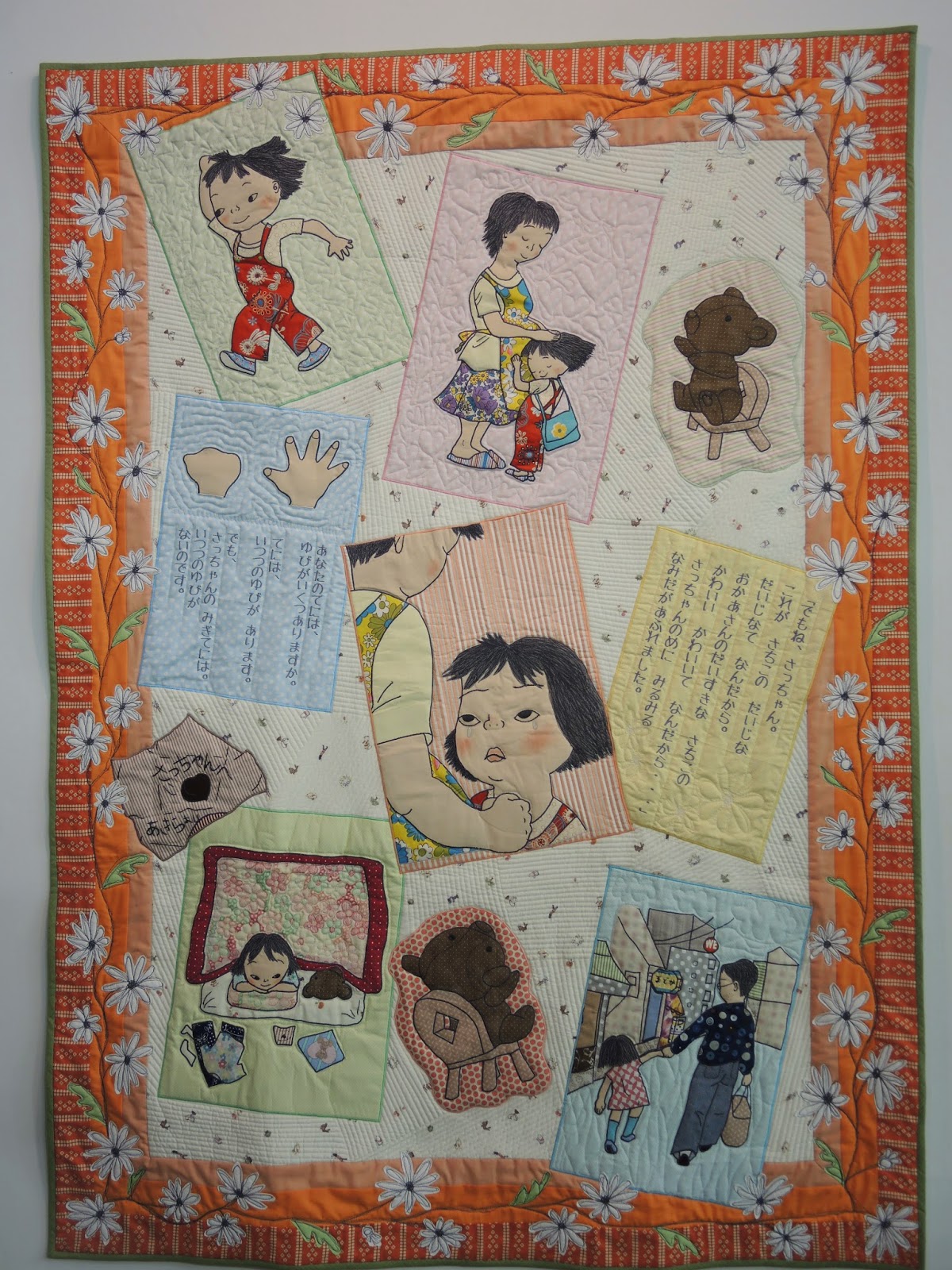 I am not familiar with this book about Sa-chan but
Yukako Nakayama has made a quilt with illustrations close to those in the story. 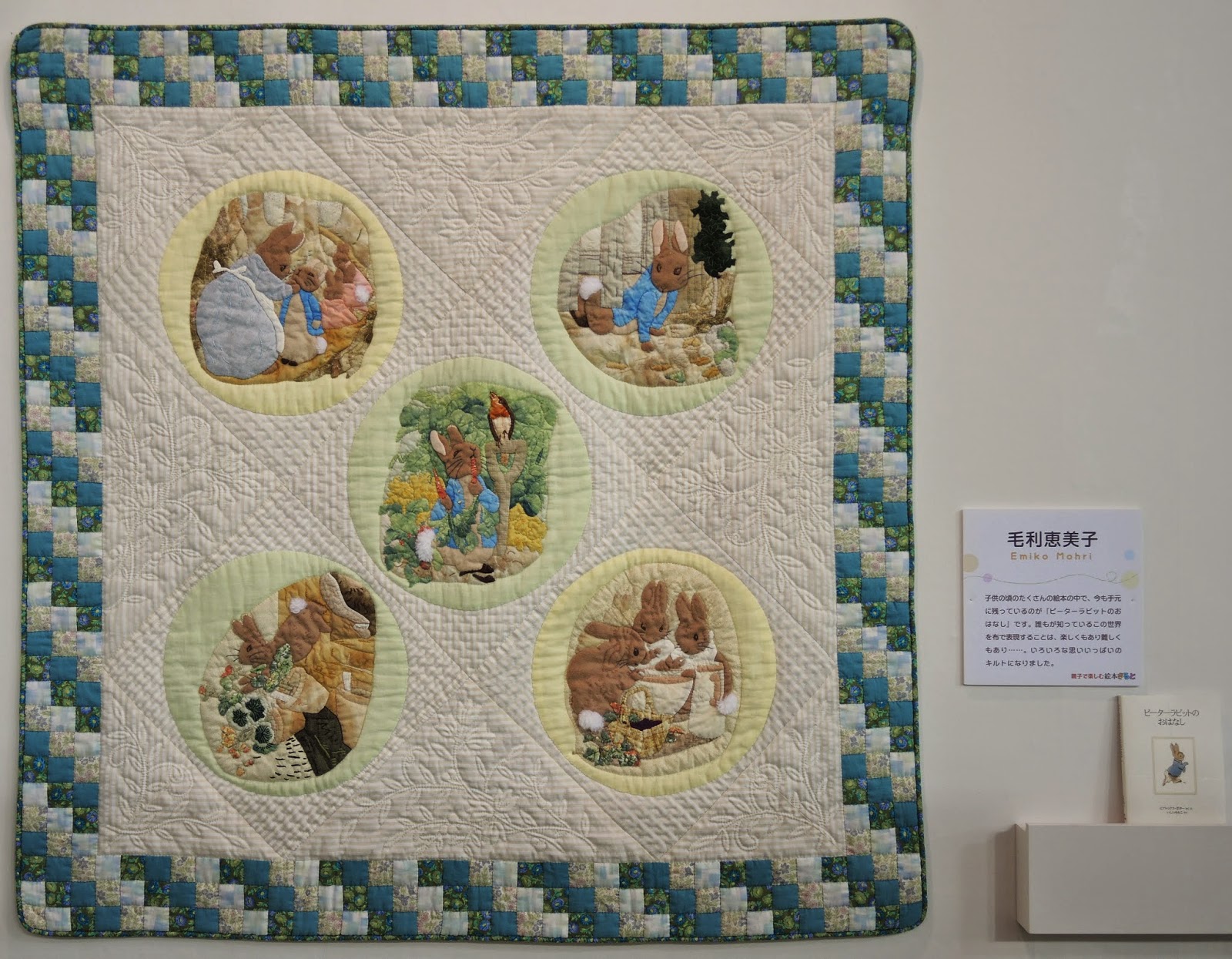 The Tale of Peter Rabbit.

these by Emiko Mohri with beautiful white on whits quilting around each illustration. 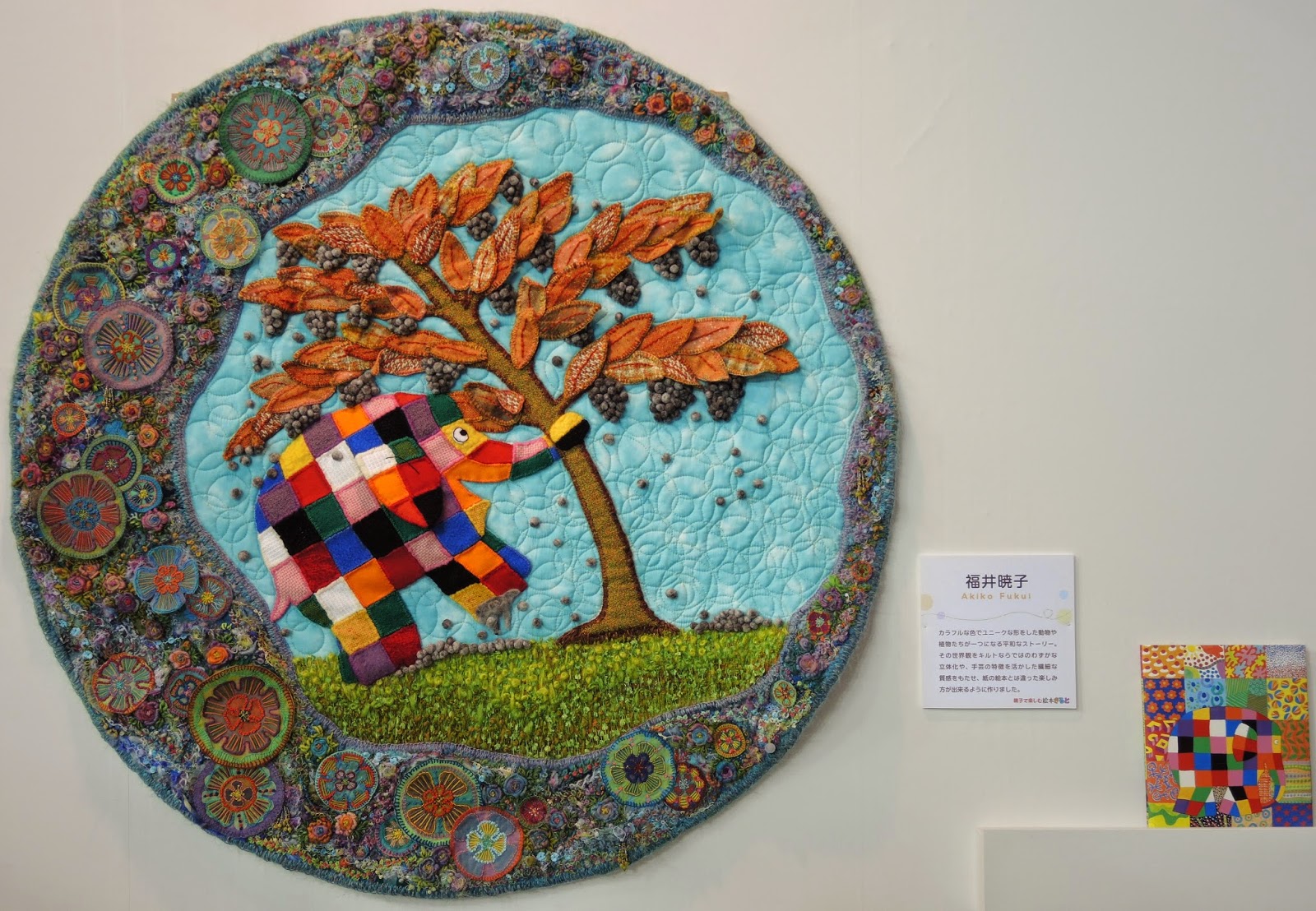 I think I have seen this book among children's
books in the book store but the name is not on the cover.

Akiko Fukui has made a highly embellished
version of the elephant on the cover.

This section of the show was new. Last year the theme was Moomin stories and there were many small quilts with illustrations.

The quilts depicting Wilder's books were large in size and made by quilt senseis ... who for some reason, have names in English. Does that mean one has to be a sensei or teacher of quilting to have recognition?

At lest I can cover that area without the name problem. Really, I have enough problems. My friend, called "blogger" will not let me look at the blogs of my friends, saying I am not following anyone. I have had that problem a number of times before but if I wait, it usually changes its mind and puts them up for me to view. BUT..... not this week! I can look at bloglovin but that site will not let me comment. I think I have heard these problems from other bloggers . Meanwhile, I am trying to practice patience.
Posted by Julie Fukuda at 6:16 AM